I forgot to take a photo of the outside, so the photo comes from Google Maps. If you are ever in Nagoya and want to train, however, you will not go wrong with this dojo. In typical procrastinating fashion I didn’t email them about the visit until the day before I arrived, so when I got there no one had any idea that I was showing up (this is a no no). Thankfully my Japanese helped me explain my bumbling self and they let me train with them.

Classes are held Tuesday, Wednesday, and Sunday, with two classes per day. The 7-7:45 class covers basics while the 7:45-8:30 class delves into more general concepts. To my knowledge, no one speaks English, there are so many benefits to the learning the language of Aikido without verbal instruction that I encourage anyone to try it. It forces you to focus more intently on how the instructor is moving and ensures that you are paying crisp attention to your fundamentals. 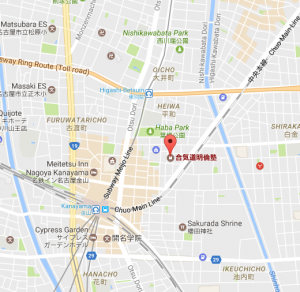 The people here are so, so good. Everyone trains with such joy and such an open heart that their waza infects uke with joy. As a large man who can easily use his size to influence an interaction, I try really hard to not use force and instead create compelling conditions for uke to move into. I found this in the waza of every senior student here. The sensei here does such wonderful work to instill in his students the idea of compelling softness that I have yet to walk out of a dojo as impressed as I had from this dojo.

We worked from ikkyo through sankyo and, like any dojo, they did things a little bit differently than I’m used to. Even foot placement during tenkan hanko was different, as this dojo favored a much narrower stance than I’m used to. It took a lot to keep up with what they were doing and several times I resorted to watching footwork to figure out what in the world was happening. Basically, the masochist in me was eating this up.

The main lessons that I walked were threefold: I was shown a gauge of softness to achieve, the importance of taking all tension out of the shoulders was re-emphasized, and the idea of, as uke, not trying to dominate and dictate the interaction was strengthened. All in all, I wish I could train here every day for a month.