One of Shiz’s friends from work moved to Charlottesville with her family a couple of years ago, so after D.C. we drove the 120 miles from D.C. to Charlottesville.  It’s a nice enough drive, through a tad uneventful.  Highway driving in the Southeast presents a lot of the same viewing: two 2-lane roads separated by a median and trees on either side.  Every now and then you get a glimpse of a house or town, so driving through the South is like a re-assuring blanket that allows you to get deep into your thoughts as you drive.

We arrived in Charlottesville, stopped by a grocery store to stock up, then headed off to our AirBnb.  300 meters away, though, we started to hear a thunk-thunk-thunk sound from the right rear tire every time I took my foot off the accelerator.  I thought maybe something was wrong with the gearbox because the thing would still drive.  Thankfully we were close to the AirBnb so we parked, unloaded our stuff, and I waited until Fin went to bed to go out and see what in the world happened.

I am so glad that we are doing this trip in the age of the internet.  Trying to do this without the likes of The Samba or Roadhaus would result in either lots of tears, a dictionary’s worth of new swear words, or intense alcoholism.  Thankfully, those two above services mean that the tears are fewer, the swear words common, and the alcoholism mild.  Furious internet searching led me to believe that the problem lay with a damaged CV, but all the descriptions said that I should hear the thunk sound when I accelerated, not when I left off the gas.

I found a shop that could squeeze us in and Shiz’s friends phenomenally lent us their car so that we could see things while we were sans vehicle.  Roadhaus and Yelp led me to Straight Up Automotive, a highly-regarded shop who said that they work on Vanagons.  I dropped Knut off and prayed.

They called back saying that the right axle had broken and were going to try to work it loose and replace it.  Better yet, they would even have it done before Friday.  I said yes please and got the car back in wonderful condition with some time to talk to the mechanic as well.  We were back in shape!  While all this transpired, however, we saw the wonderful little town of Charlottesville.

Charlottesville is well-known for the University of Virginia (though as I write this is is known for a horrific incident with white nationalists) and old money.  There is a lot of it and that wealth shows itself in the shops and restaurants downtown.  Charlotteville’s Mall, a six-block open-air pedestrian walkway, makes up the heart of downtown.  Lined with shops ranging from ritzy restaurants to a donut/ramen combo shop (apparently the donuts and the ramen are both awful), there is outdoor seating, fantastic people-watching, and some cool little art installations throughout.  Fin particularly enjoyed a chalkboard where people could write whatever came into their heads.

We walked the Mall up and down, picked up a really good sandwich for lunch, and generally had a hard time trying to decide which delicious thing to eat.  It seems like every town is revitalizing their downtown area these days and Charlottesville is doing a particularly fine job of creating a living space for people to enjoy.  Blocking off the central avenue for people to be people is at the heart of that, in my opinion; what they achieved could not be done with cars driving through the middle of the street. 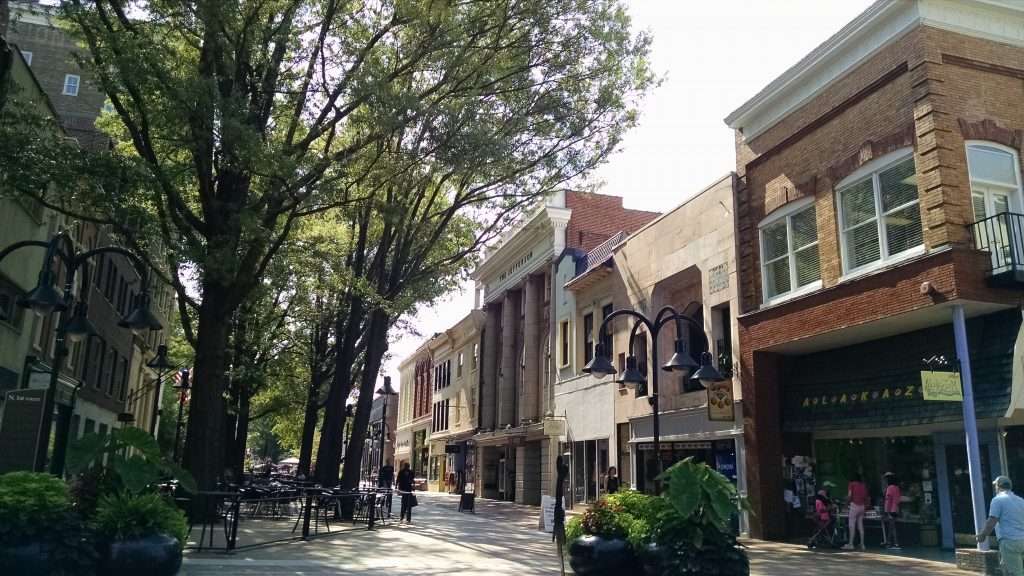 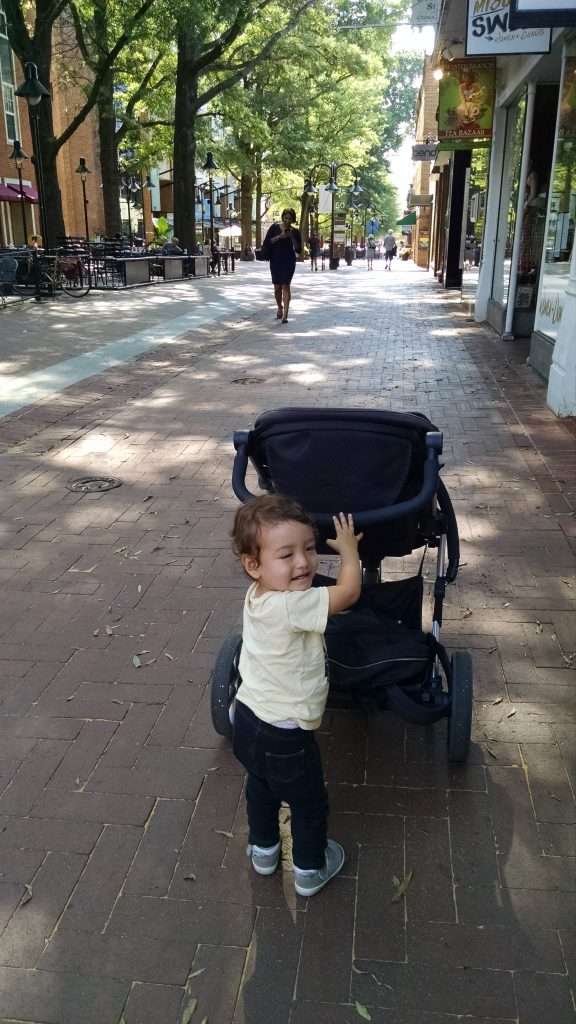 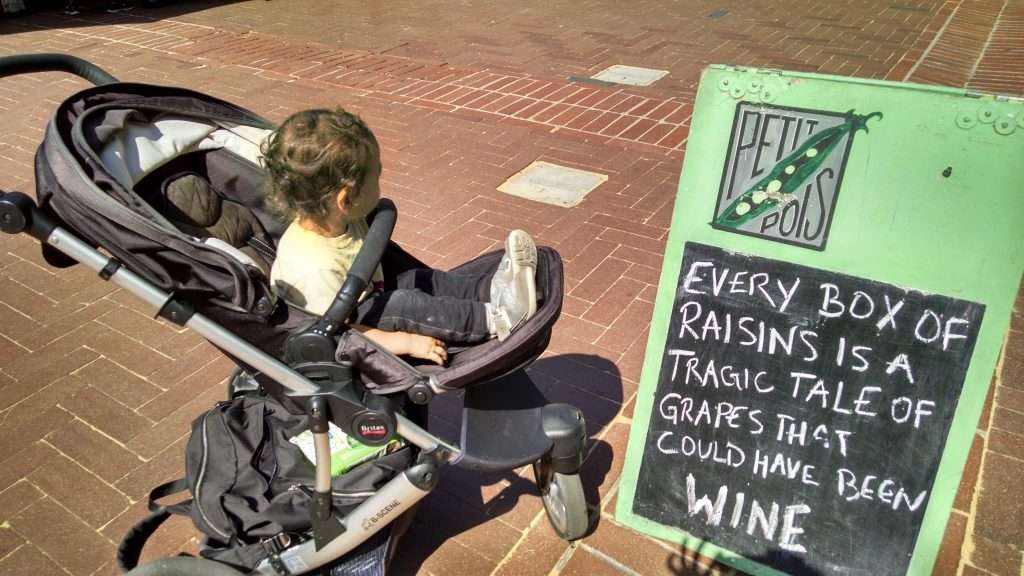 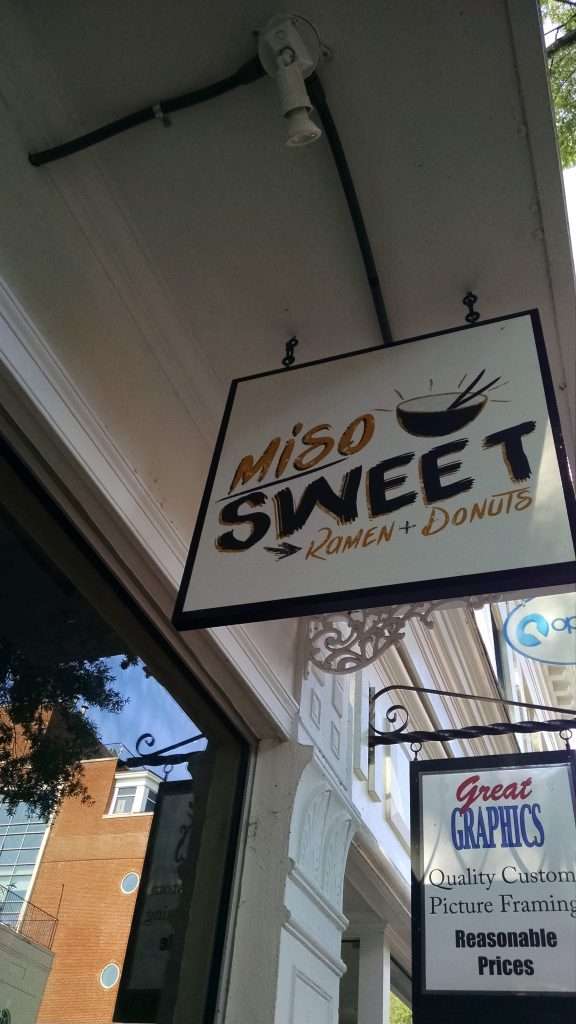 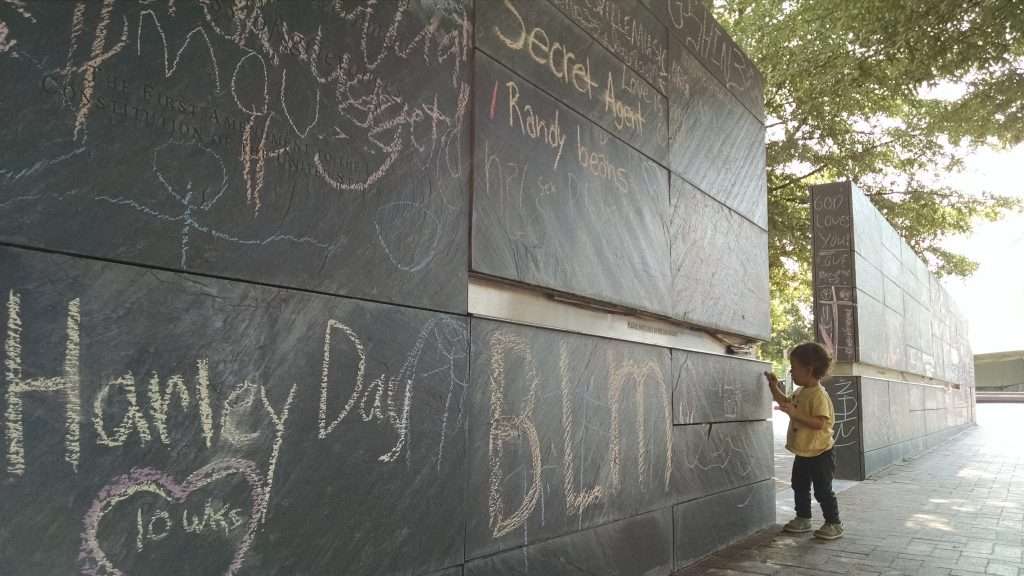 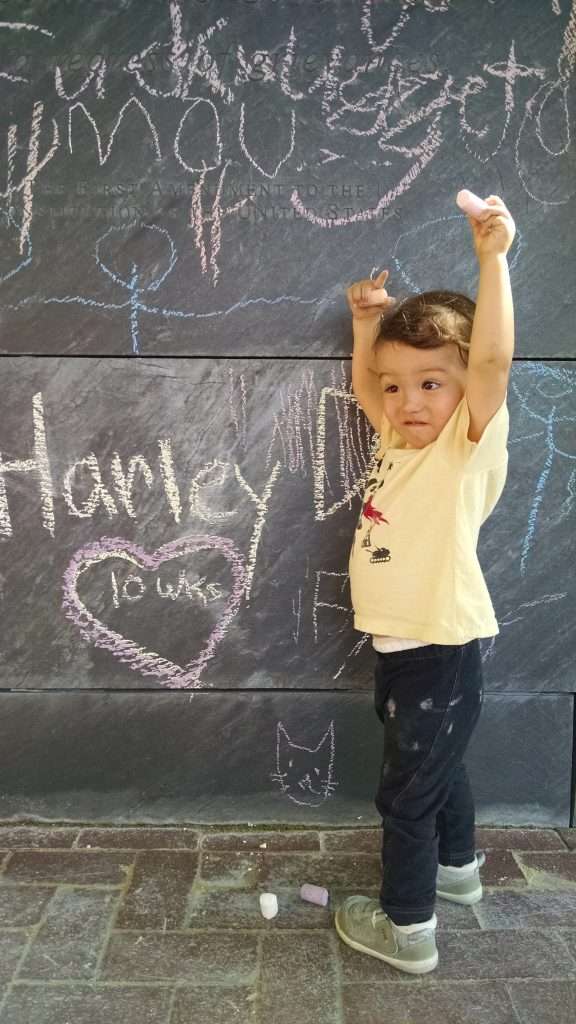 If you visit Charlottesville you will probably go downtown, but you absolutely must go a little bit outside of downtown for some good eats at MarieBette.  As you know, we love good French pastries and that is exactly what MarieBette serves.  That alongside some damn fine chocolate cake and t-shirts with bread puns.  It’s my kind of place.

we were lucky to be in Virginia smack in the middle of peach season.  The hills around Charlottesville are rich in peach vineyards and one down the street from Monticello happened to be holding their Peach Festival the day before we left for Roanaoke.  Fresh peaches, peach donuts, peach cider, and great views; how could we not? 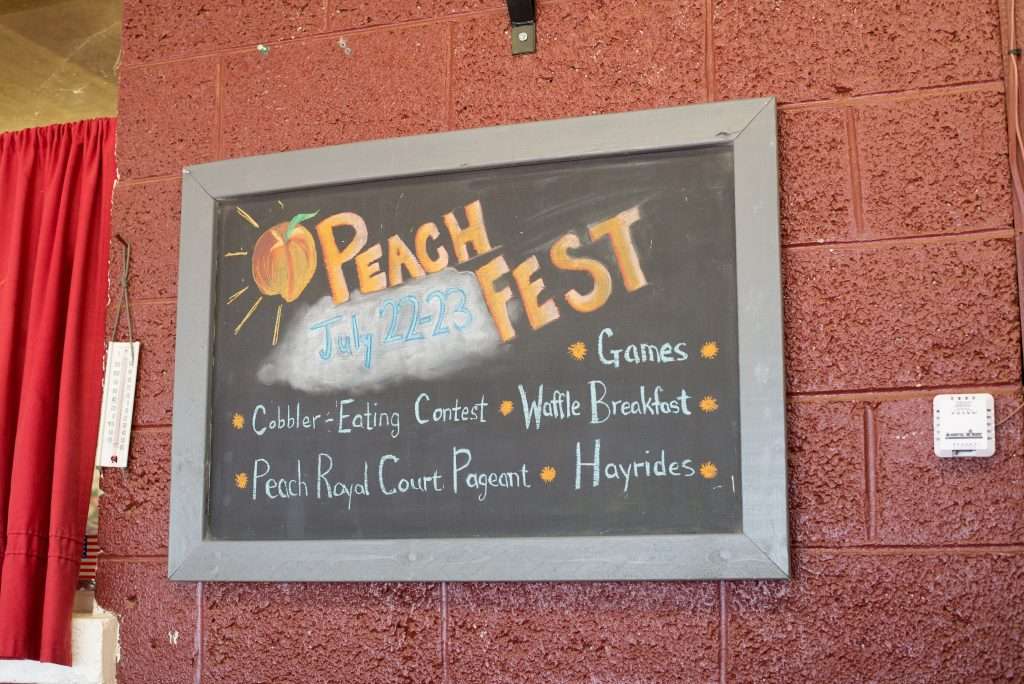 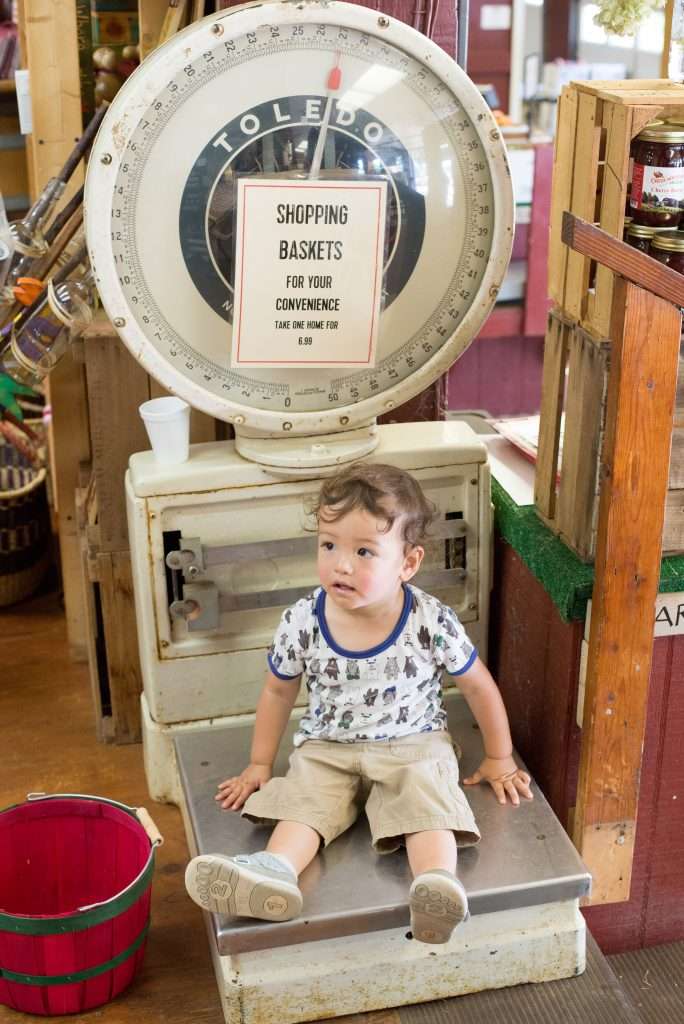 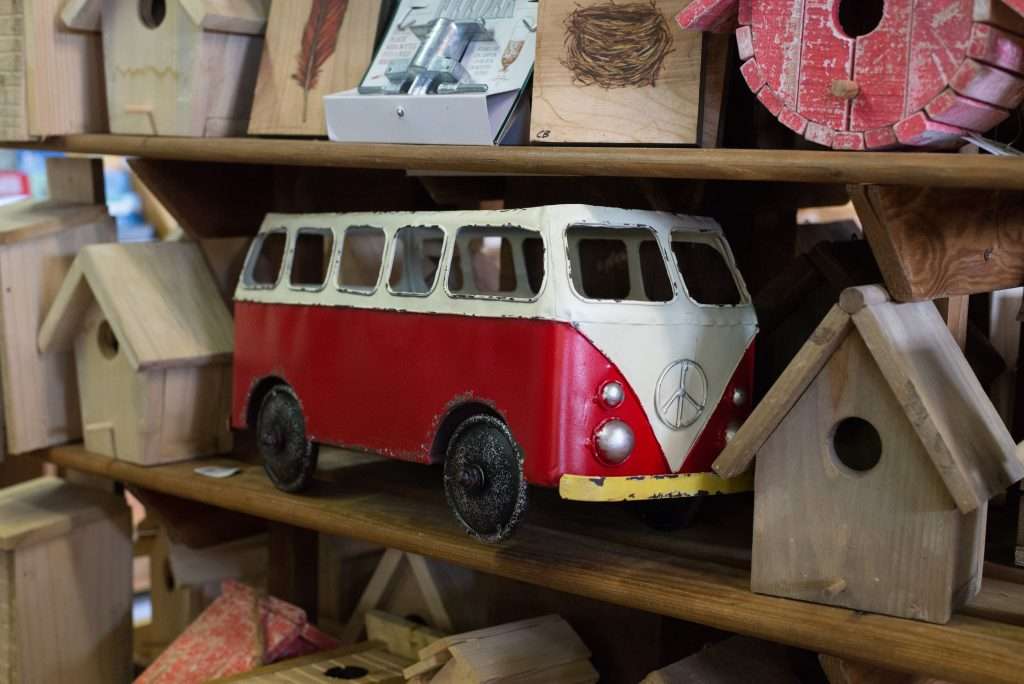