With a slightly disappointing eclipse behind us, it was time to fix this broken axle!  To do so, we faced two options fora  3-4 week fix: stay in Nashville or return to Winston-Salem.  Winston offered free housing, a car, and family, so Winston it was.

Before the axle broke on us, however, we had made reservations for Mammoth Cave, just north of Nashville.  At 651 km, it is the longest known cave system in the world, so we had to visit.  Obviously people can’t just walk in, so tours are required and with the eclipse, tours were hard to come by.  The only time we could book was the 23rd at 1:45.  That would give us enough time to eat, let Fin sleep in the car, tour the cave, and then stop at a hotel somewhere between Mammoth Cave and Winston before heading on to my mom’s house.  The truck rental lasted for 3 days, so there was plenty of time.  We would even have time to stop by Prince’s Hot Chicken on the way out of town for lunch.  Perfect. 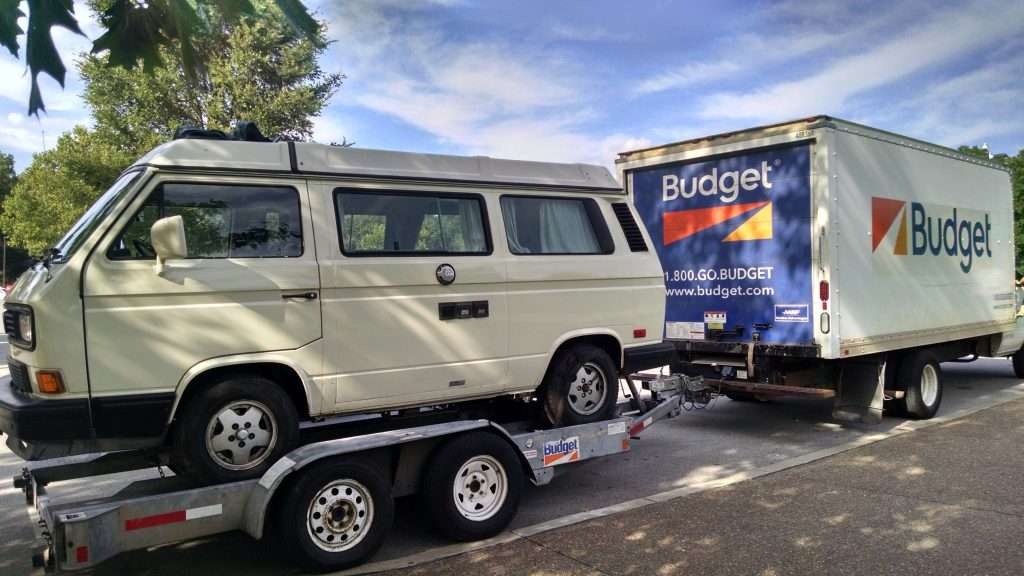 We loaded up the van the night before, so on the morning of the 23rd we were all set once I brought the van back and secured it.  We drove to Prince’s right as they opened at 11 to find a line of 10 people ahead of us.  It’s fired chicken and the origin story of Nashville spicy chicken, so no worries there.  We ordered a regular spicy chicken and a wing as hot as they could make it, plus some tea and sat to wait for the 15 minutes they said it would take.

They said it would take.

20 minutes later and we were still without chicken.

15 minutes after that and we were still without chicken.

10 minutes after that and not only were we still without chicken, but people who had ordered after us were getting their chicken.  Our order was not complicated.

No we were coming up on noon without chicken and we still had to drive the 1.5 hours to reach Mammoth Cave, not to mention park and get our tickets.  We weren’t about to miss Mammoth Caves for chicken, so were debating calling the whole thing a lot when they called our number.  Chicken in hand, we bolted to the car and drove North. 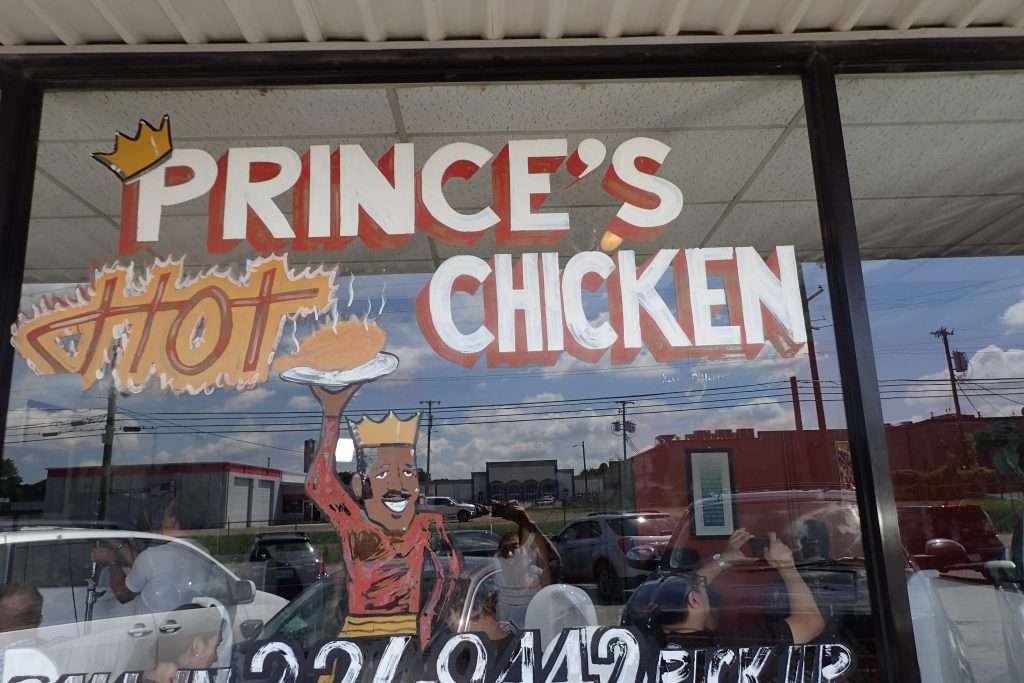 Quick backstory, Nashville became famous for really hot chicken wings all because of Prince’s.  Nashville chicken is now a well-known style due to this place.  It all came about because a wife had a husband who fooled around on here and one day she had enough of it and was determined for revenge.  So when he came home one night, she made the hottest, spiciest chicken she could make.  Not wanting to lose face, the man choked it down through the tears.  Nashville chicken was born. 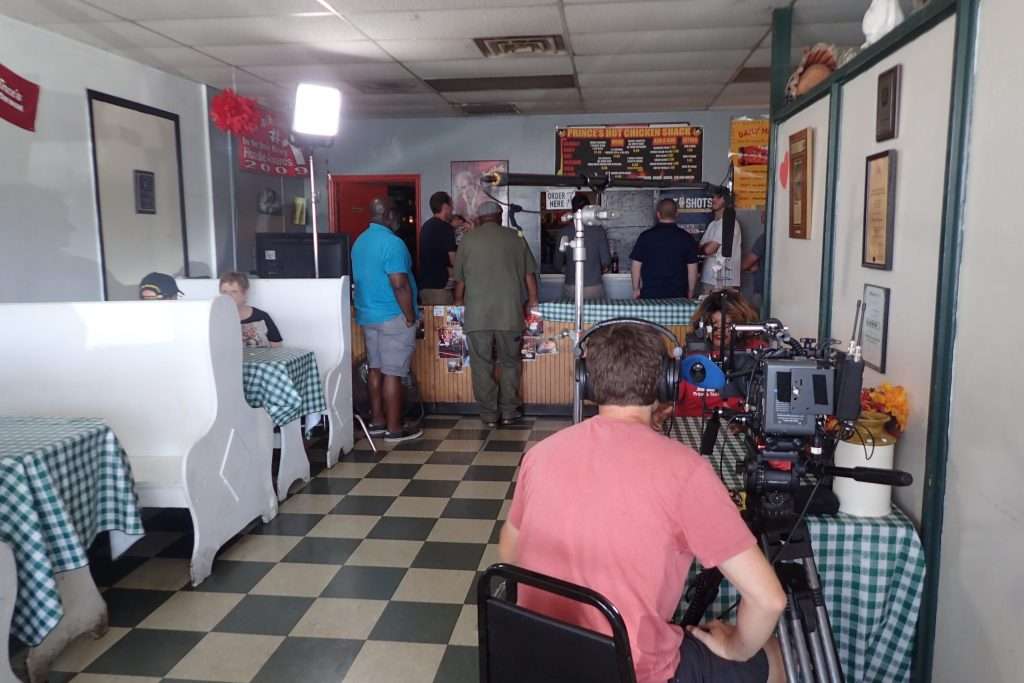 Back to the story, we had 1.6 hours to make a 1.5 hours drive in truck that was not supposed to go over 70.  With a trailer, you’re not supposed to go faster than 55.  We ignored both of those as I sped like the devil down the freeway with a car a in tow.

Remember in the last post how I mentioned that the first time I towed the Westy this way I was worried that it would just suddenly fall off and we’d break our lovely car?  That was going 40 mph.  We were doing 70, all the while slowly becoming more and more convinced that we were going to miss our tour by something like 10 minutes.

Shizuka began calling the park to see if we could reschedule, then checked the website only to find a sentence stating that you had to pick up tickets 30 minutes before the tour started.  Now thoroughly convinced that we were going to miss the cave, wee sped on anyways in the hopes that we could beg and plead once we arrived.  we were cutting it very close.

Fin fell asleep pretty quickly, so we had time to eat some chicken on the way.  You know what?  Prince’s Hot Chicken is not very good.  Sure, it’s spicy and all, but the chicken itself is only slightly better than grocery store chicken.  You might be thinking that rage caused me to give their chicken and biased taste, but it’s seriously not that good.  If that were the case, it would have been bitter, not spicy.  All Prince’s does is take mediocre chicken and shake a lot of hot spice on it, which in the end made all the juice and spice run onto the bread they serve the chicken on.  The super-spicy wing brought no tears to my eyes, but the piece of bread it came from was straight from the devil.

Anyways, we drove on with little hope and lots of chicken-angst, praying that the van wouldn’t fall off.  Finally, we saw the sign: Mammoth Cave: 15 miles.  It was almost 1:30.

We started talking tactics.  I’d drop Shizuka off at the door and she’d get tickets while I parked and took care of Fin, whose odds of needing a diaper change were over 50%.  Shiz would then stall (perhaps fake a leg cramp, perhaps take the guide hostage) until Fin and I caught up.

Finally our exit arrived and we realized that another 2-3 miles awaited us until the parking lot.  At this time, any car in front of us would be going too slow, but the car in front of us consistently stayed under the speed limit.  We were not happy with them.

Make it to the parking lot we did, however, so I dropped Shiz off to pick up tickets and looked for parking.  As I was driving an empty moving van with a hitch, bus parking was the only option.  Unfortunately, it was past noon and all the bus parking was full with either buses or two cars that couldn’t find another space (they received my ire, too, it was that kind of day).  I drove circles looking for a space when just as I was about to pull off onto the side of the road I saw Shiz coming out of the main entrance.  It was too late.  We had missed our tour.

Shiz ran up to tell me that we had not missed our tour, she had tickets, and that I needed to park ASAP and meet her at Shelter 1.  reinvigorated, I tried bus parking again to find someone leaving a space.  Victory!

All I had to do now was change Fin and run my butt off to Shelter 1.  I was in that mode where you do everything 20% faster int he hopes that it’s fast enough to get things done but not so fast that you make too many mistakes.

I parked, jumped out, grabbed diapers and wipes and the baby carrier from the van (Fin had definitely pooped), and then changed Fin on the passenger seat of a moving truck.  Fin was all clean and nice when, as I went to fold up the poopy diaper, it slipped, smeared a little poop on the side of the van, and fell – thankfully – face up on the ground.  I grabbed the diaper, folded it, and stuck it on the floor (no hot sun on poopy diaper, thank you).  Wiping poop off the truck would have to wait, I had a kid to run with.

I booked it with Fin over towards the entrance (he had a great time) and looked around for something that looked like Shelter 1.  There were people walking towards a covered area: I had made it!

I ran towards them only to realize that they were walking right past the empty Shelter 1.  No good.  Shelter 1 people couldn’t have gone far, so I ran around trying to find things that looked like they would lead towards a cave.  So long as they had not reached the entrance and handed over tickets, we would be okay.  Who knows, maybe Shiz was at the entrance pretending to point a gun at a ranger right now.

There were some signs for a self-guided tour and they pointed towards a road that went down, so using logic that down = cave I ran towards them.  Halfway down the grassy field a ranger saw a very nervous man running with a baby, so she called out to me to ask which group I was with.  This lovely woman’s words soothed my heart: the group was stopped halfway down to go over rules and listen to a history lesson, so there was plenty of time.

I walked down the trail, turned a corner, and saw Shiz walking back.  We had made it!

The group proceeded down towards the entrance and into one extremely cool cave. 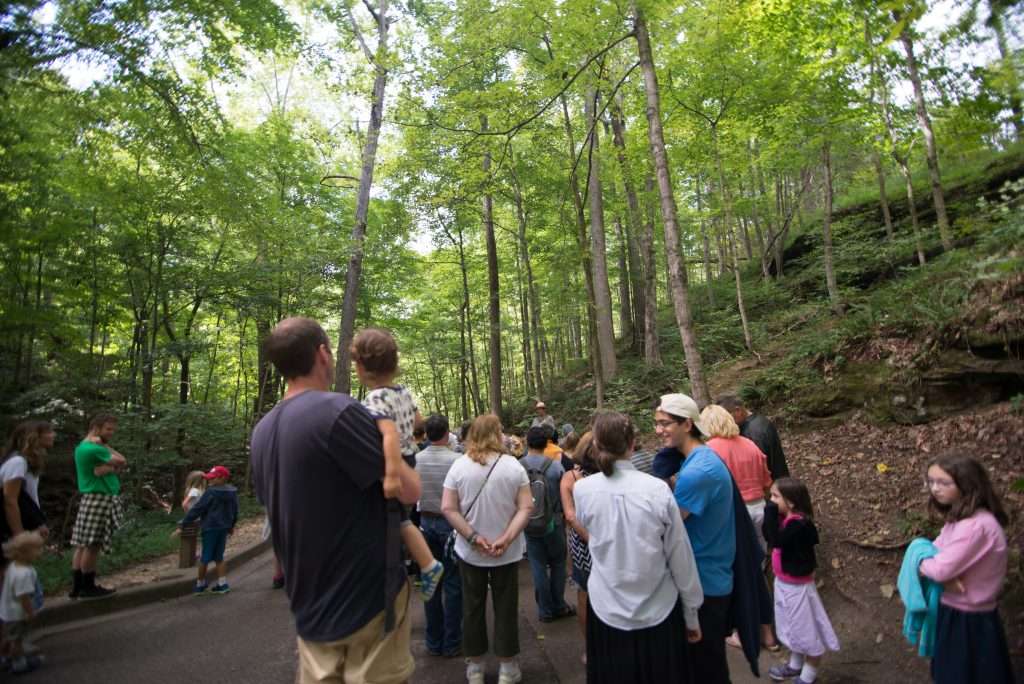 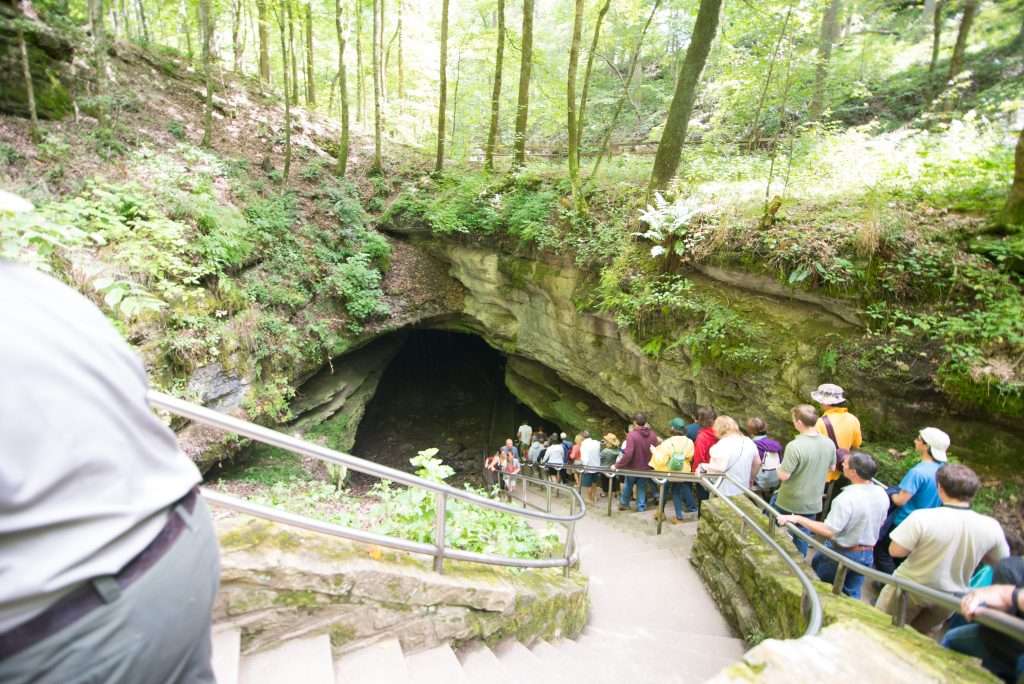 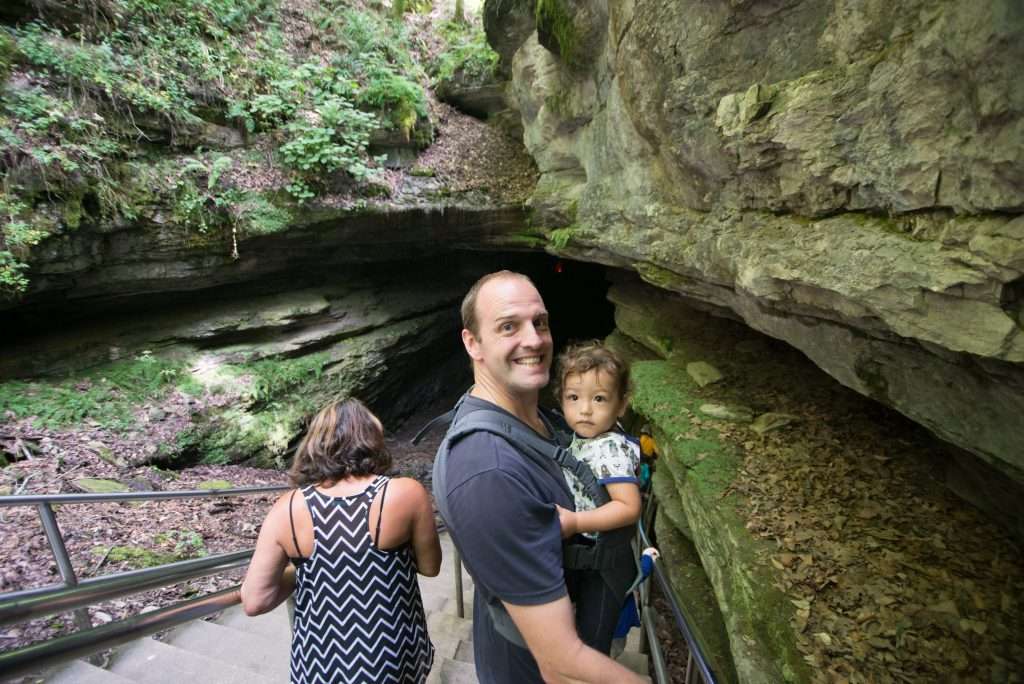 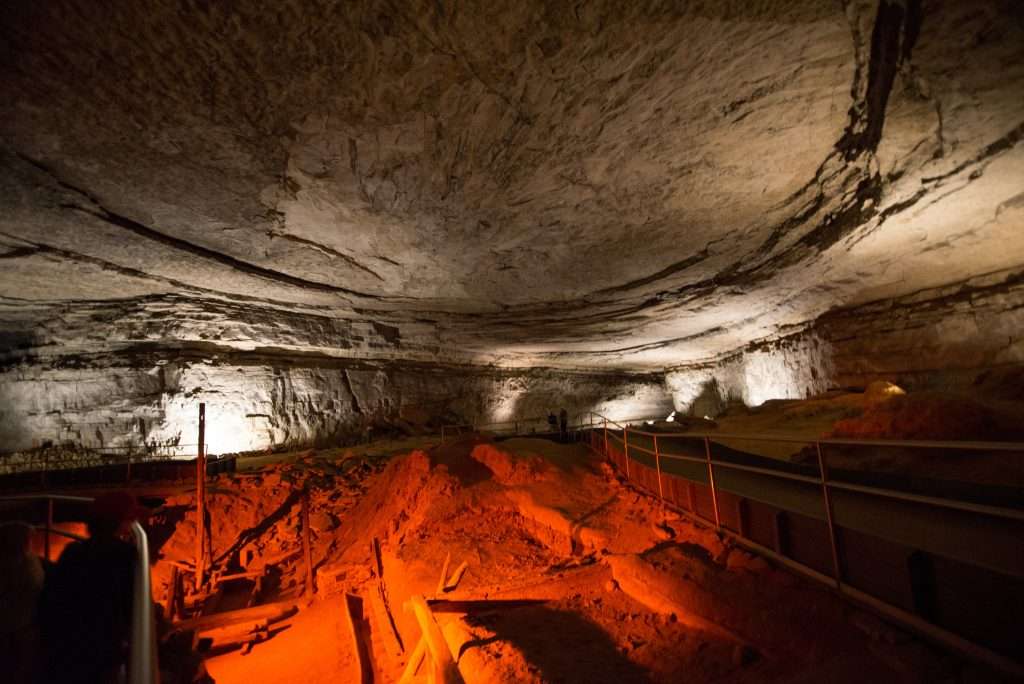 For a long time, white people were unaware of Mammoth Cave.  During the Civil War it was used as a hideout, but people did not venture too far into the cave.  That is, until Stephen Bishop came along.  He was a teenager when he started exploring the cave in 1938  and he was given free reign by the cave’s owner to explore as he wished.  He would wander through the cavern with a simple lamp, bringing back rocks, eyeless creatures, and other oddities that he found in the cave.  As the cave houses a river system, when he came to a river he would then haul in the wood to build a raft and cross to the other side.  He would haul in wood for bridges when he found a hole.

He brought others with him and showed them what he found.  He became famous and requested as a cave guide.  He did all this as a slave.

When he was finally granted his freedom, he stayed at the cave to explore and give tours.  He eventually passed away in 1857 at the age of 34 or 35, leaving behind a legacy as one of the great cave explorers of the 19th century.

Today, the cave is brightly lit and extremely safe, but imaging the cave lit only by candlelight was quite a thrill.  Here’s an illuminated version of what Stephen walked. 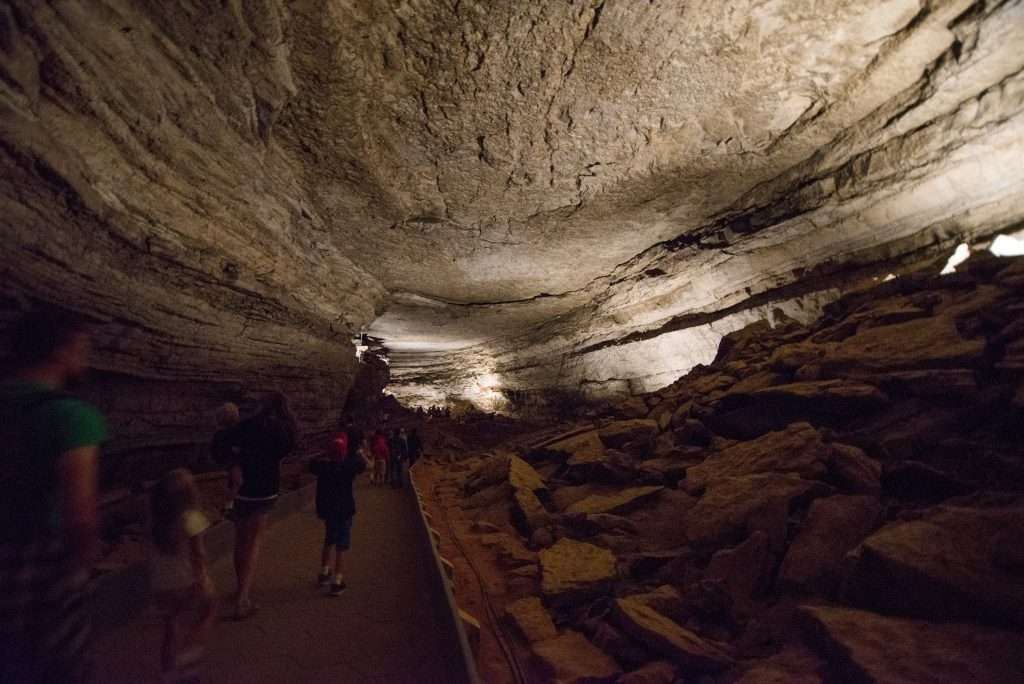 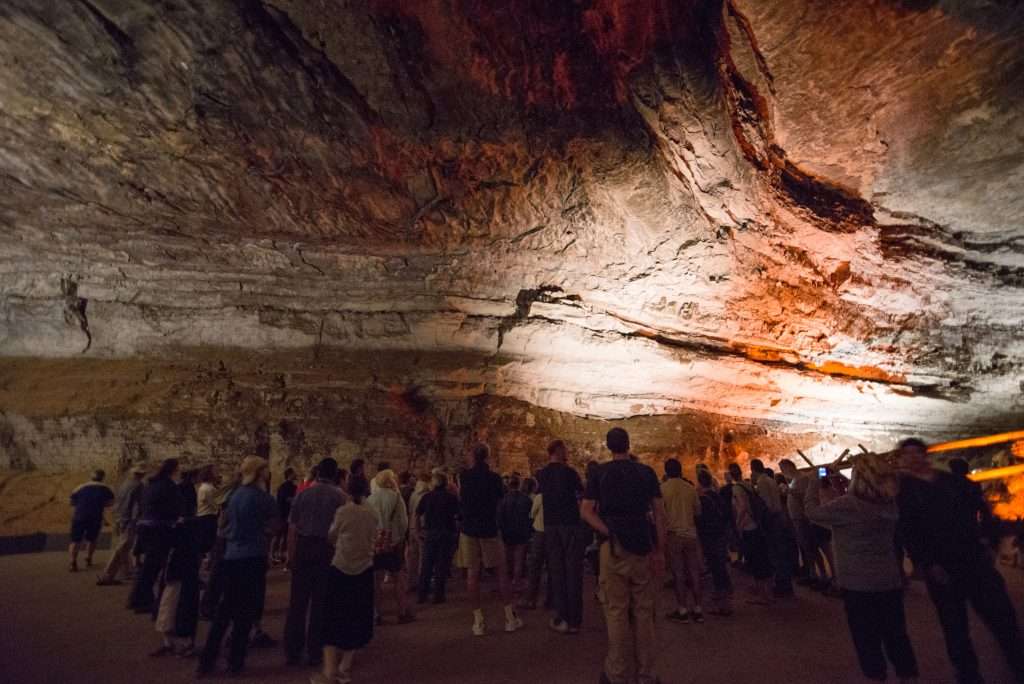 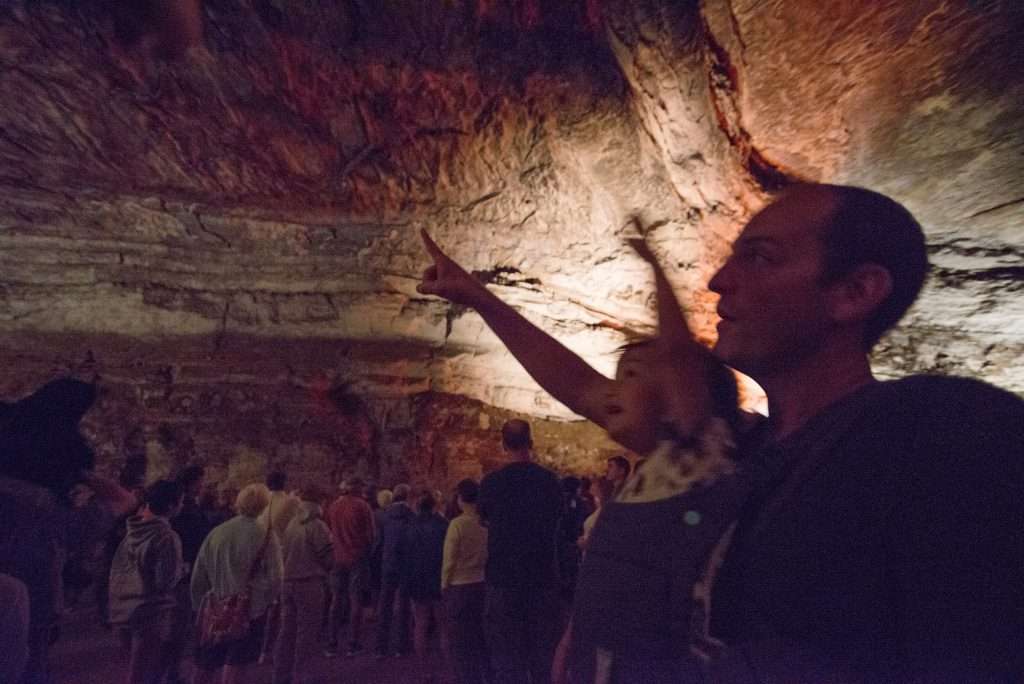 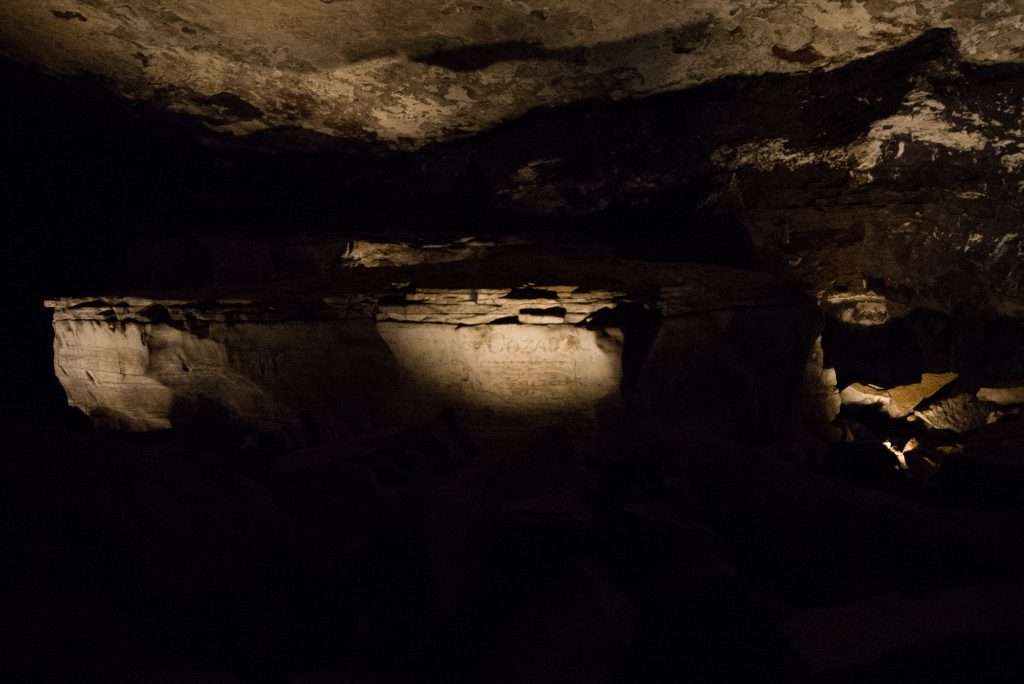 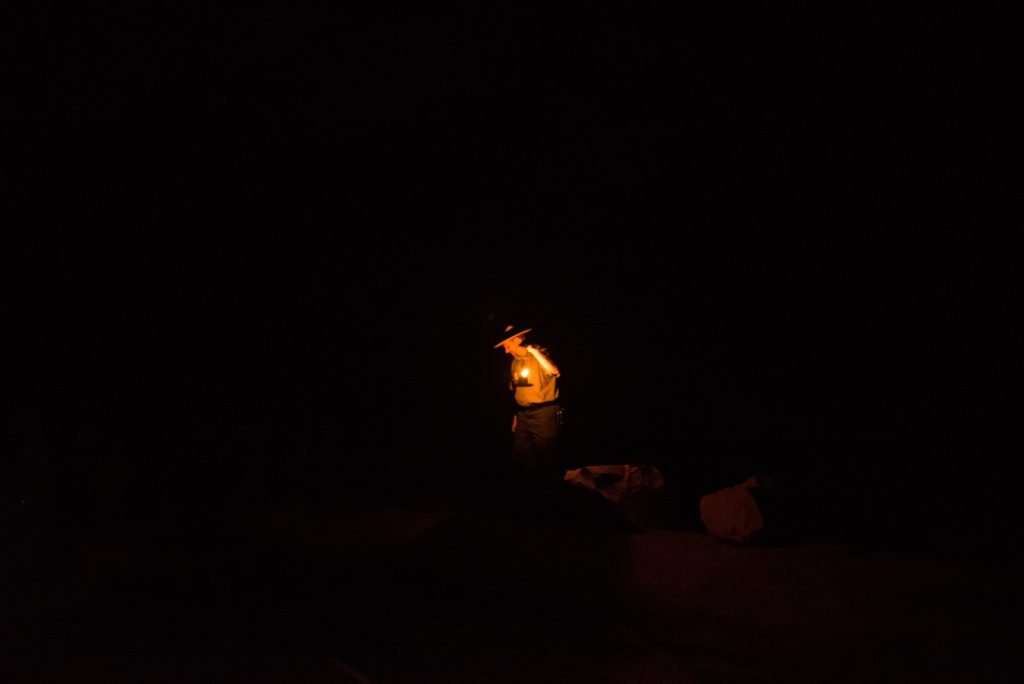 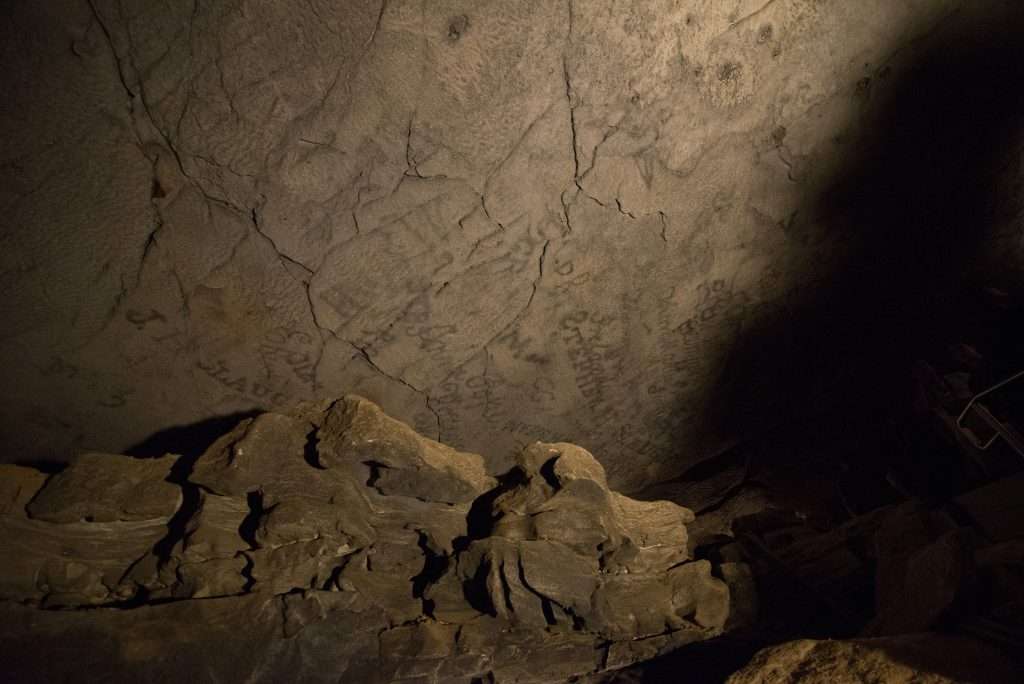 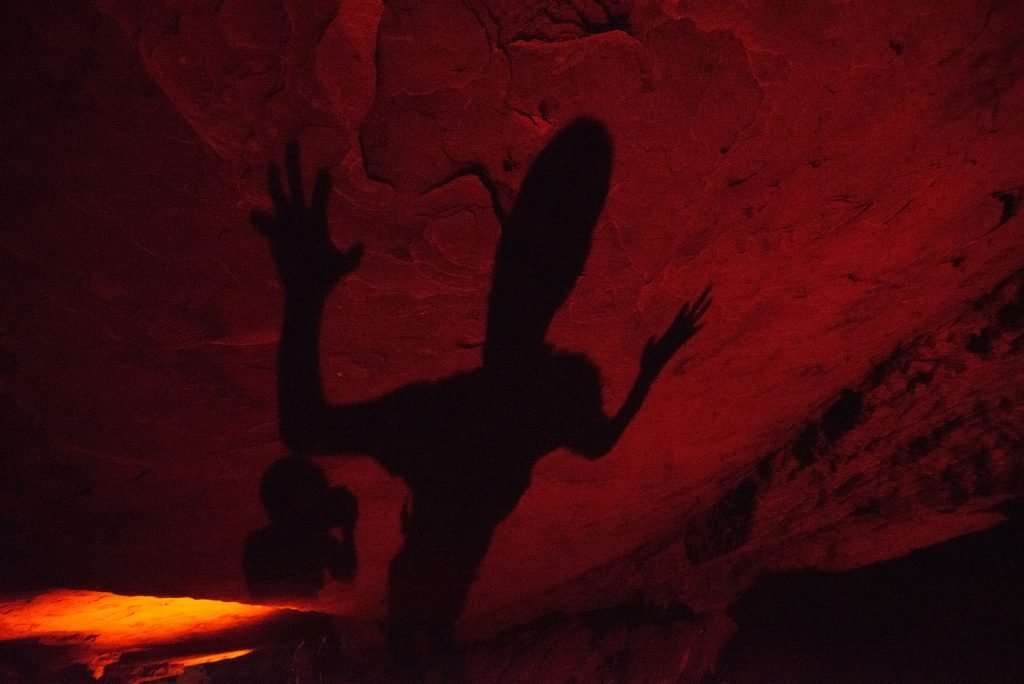 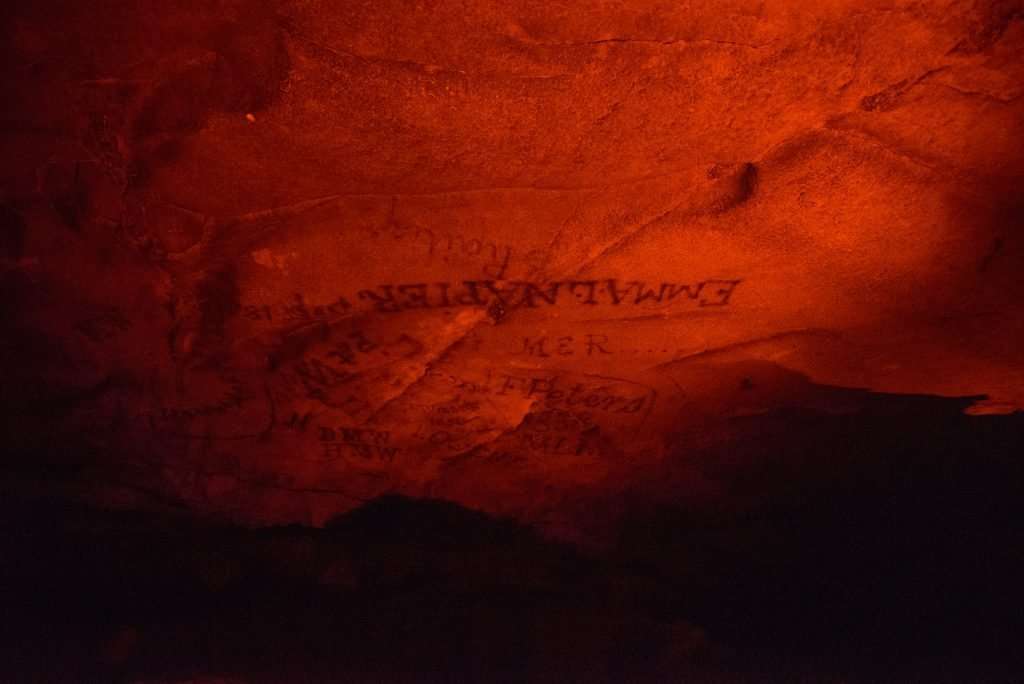 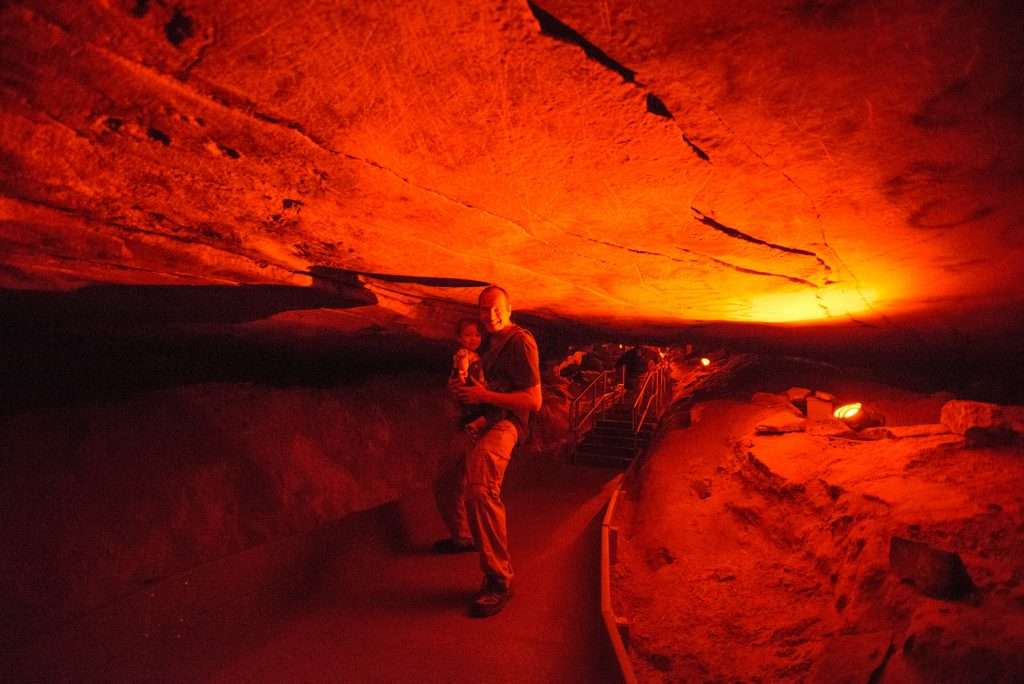 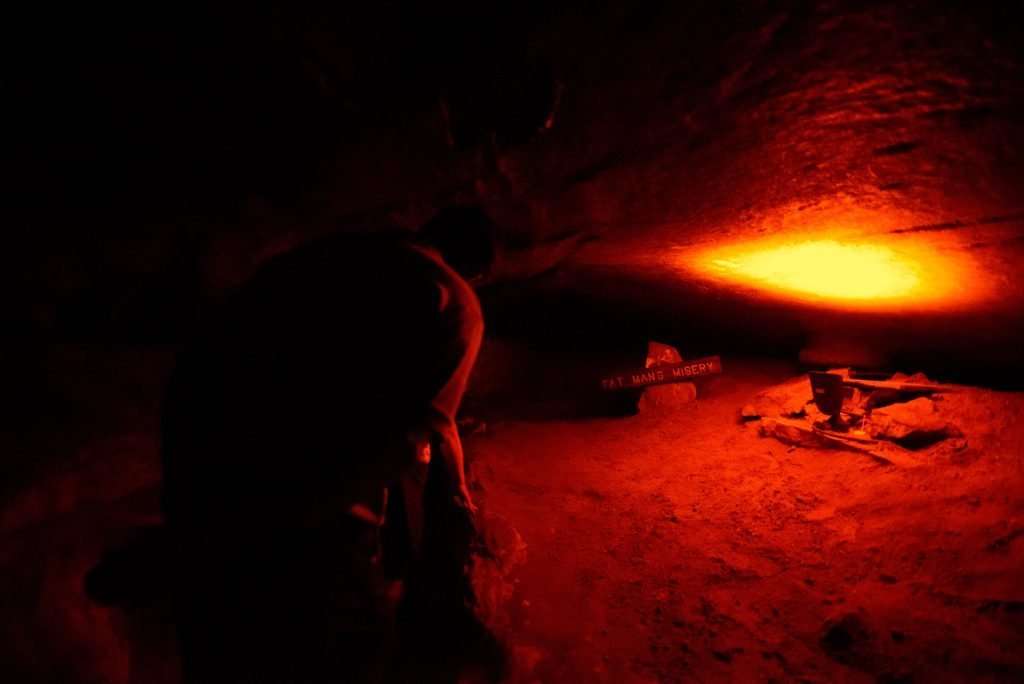 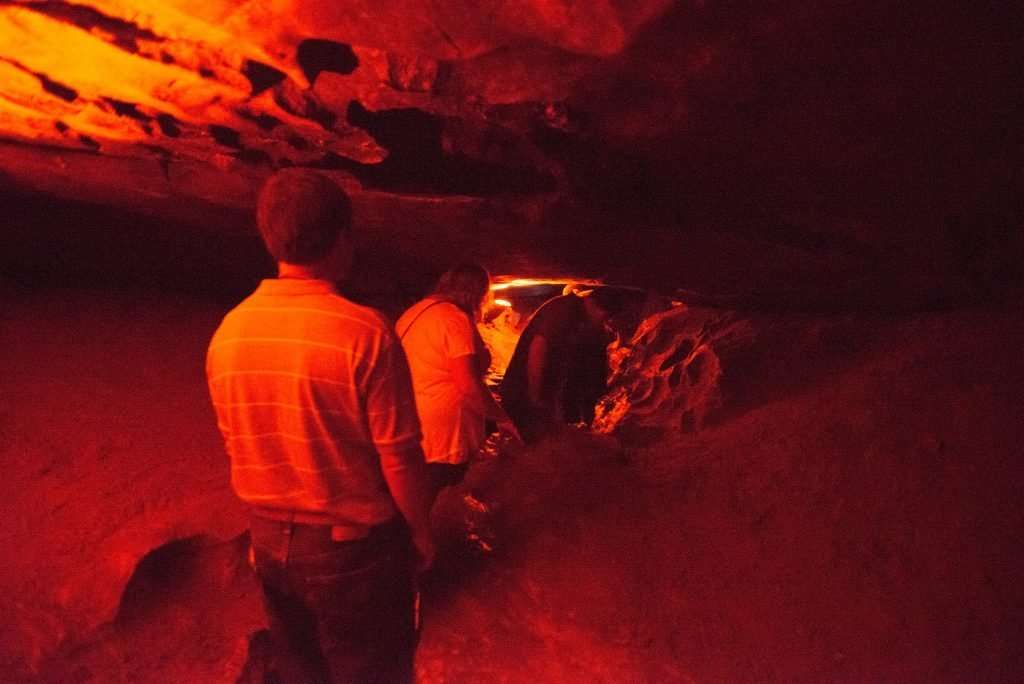 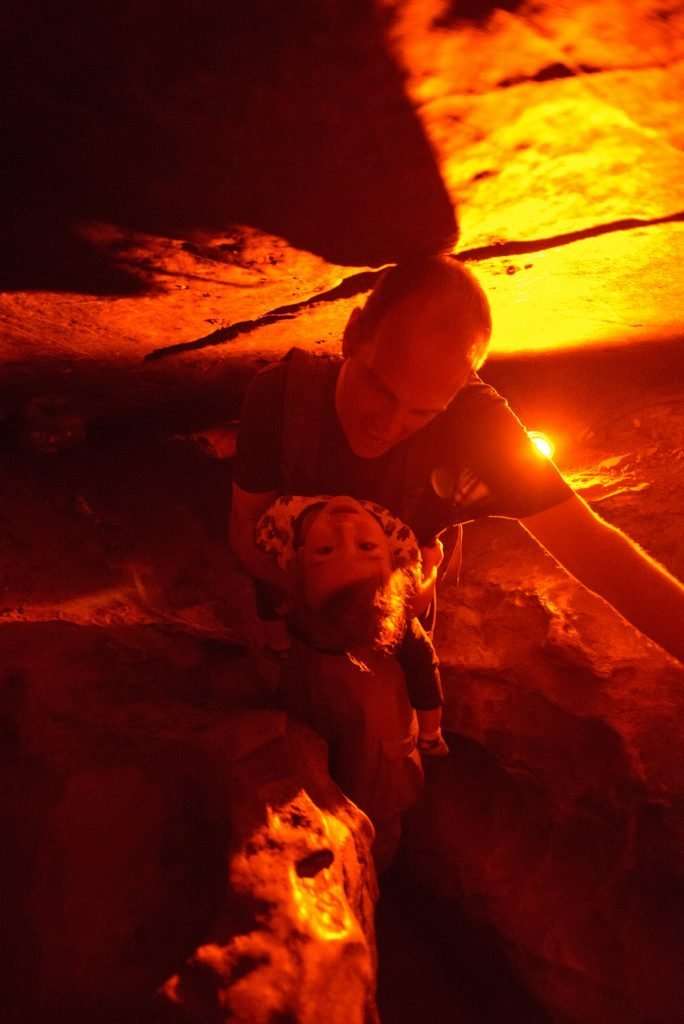 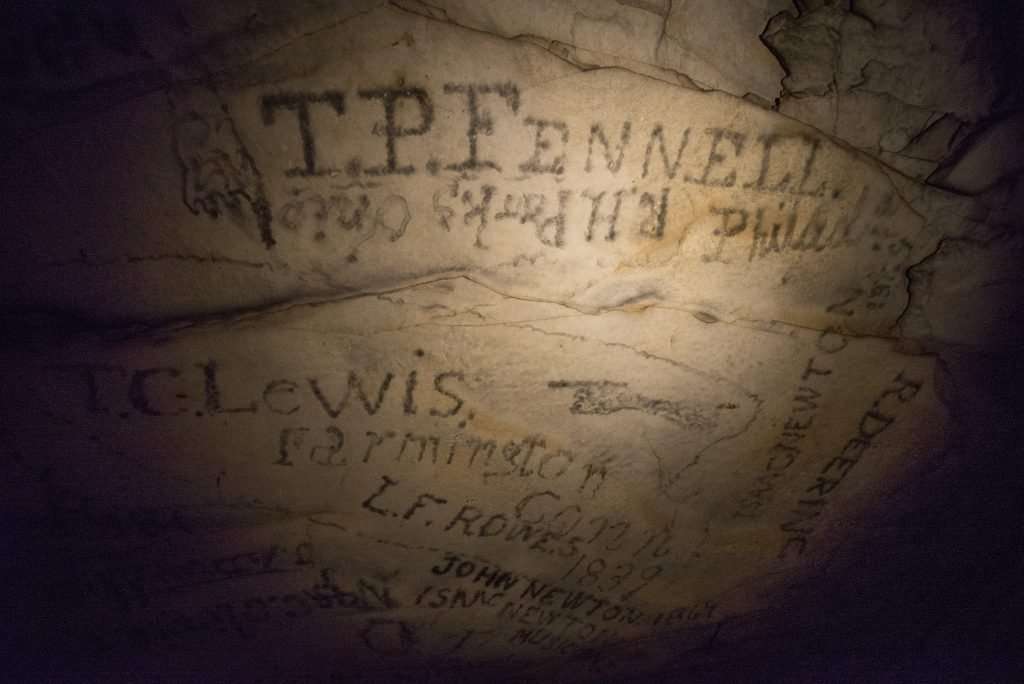 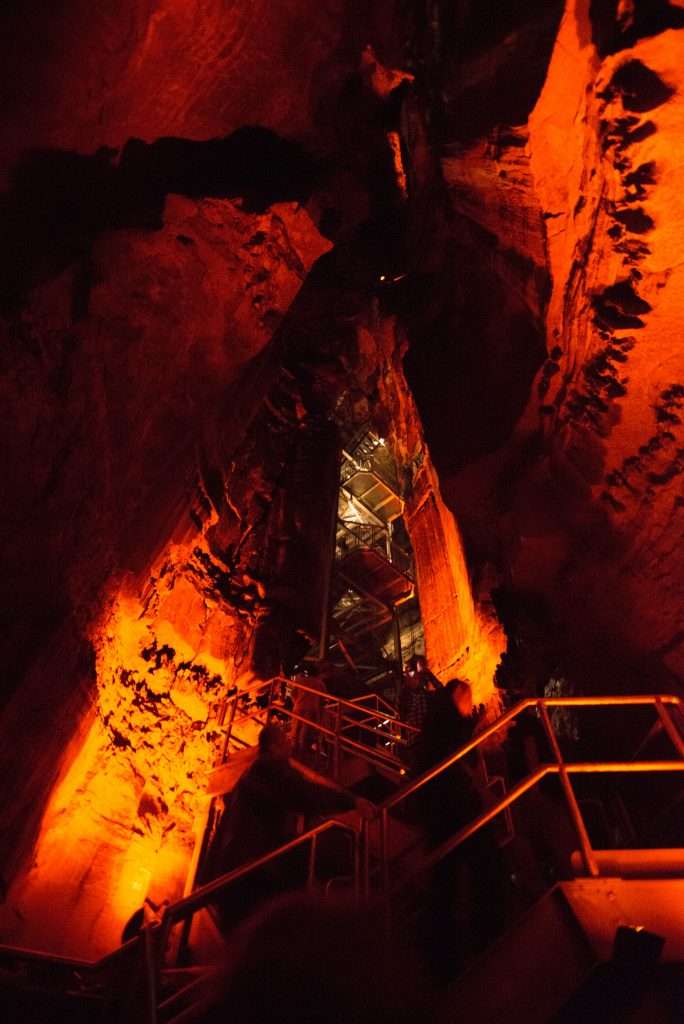 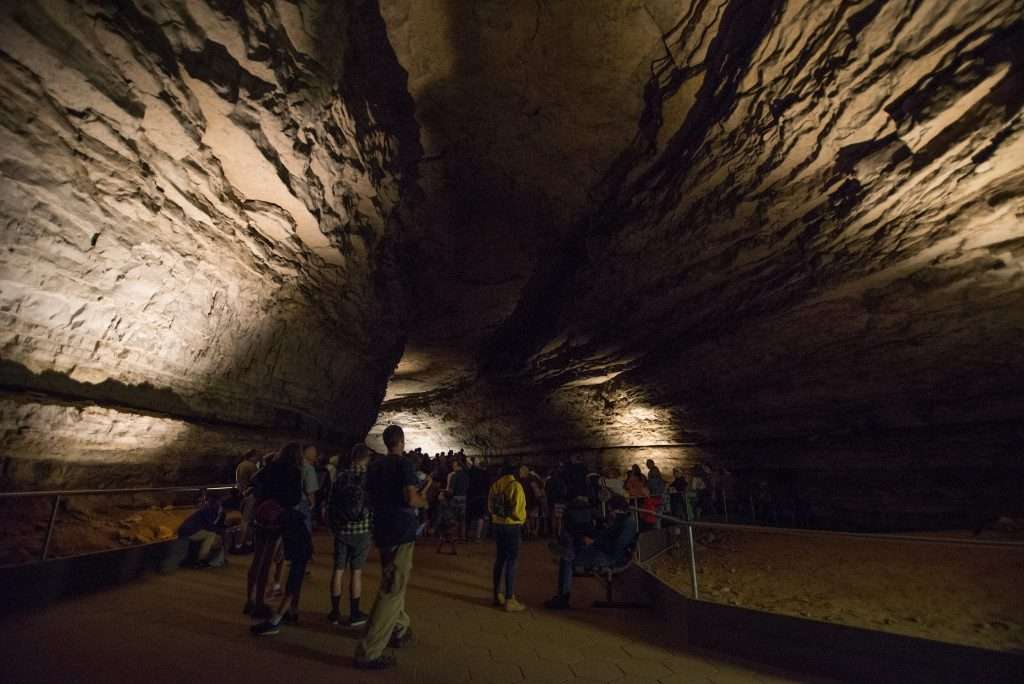 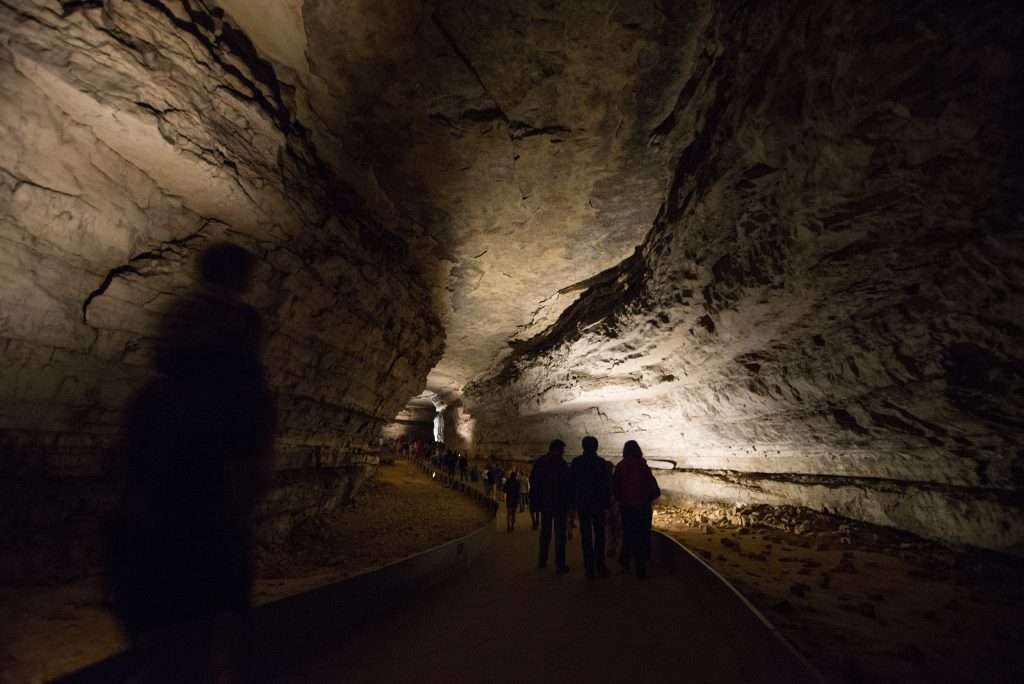