This was my first time training in Taipei!  I was very excited to see how things would be compared to the training that I’ve received in the US and Japan.  I googled some “Aikido” and “合気道” to find dojos and this dojo seemed easy to reach with a good body of students.  The dojo was easy to reach from Minquan-West Road station on the red line. 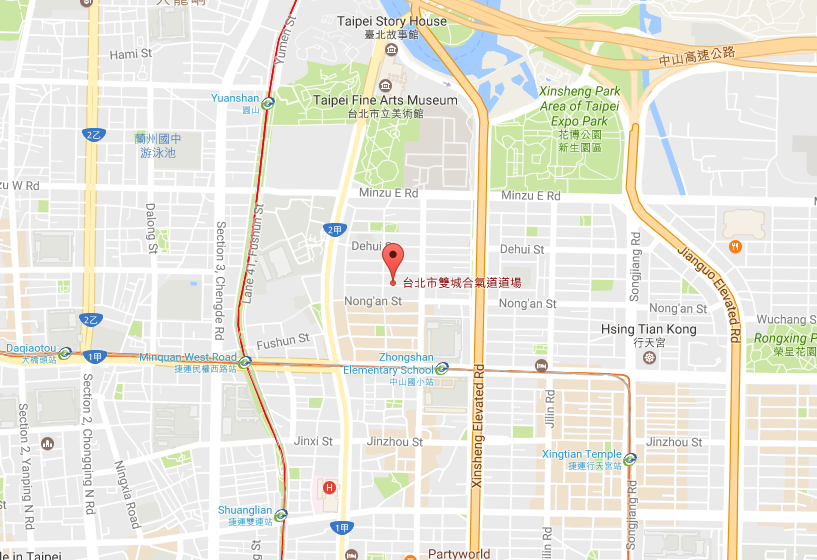 This was my first time training in a language that I didn’t understand, which changes a lot.  First, I had to pay a lot more attention while Sensei demonstrated technique, because I somehow had to figure out what he was talking about purely from body movements.  Sometimes it was easy, like when he was talking about good ways to get into position for shiho-nage., but I’m sure that I missed a lot.  Thankfully the main line of communication with Aikido is non-verbal, so once training began Sensei could come over and correct anything that I was doing too horribly (which of course happened).  After a little while, a student with pretty good English joined class, so he was very helpful in clarifying any important points.

In this dojo your training partner stays with you for the entirety of class and generally a black belt paired up with a kyu student.  The English speaker was a black belt, so he joined me and my partner for the first half of class before helping another pair.  Sometimes he’d come back to explain some point to me, which was helpful when the Sensei apparently said: “Be very careful with this technique, as you can easily break someon’s arm.”  That explained the nervous laughter from my partner.

Class began with stretches from morote-dori and proceeded from there into kokyu-nage throws, irimi and tenkan.  The second half of class focused on mentsuki shiho-nage and we looked at two very different kinds: the traditional style of coming under the arm and one where nage wrapped his/her hand around uke’s and then turned back to pin them to the ground.

I always enjoy seeing the similarities and differences between dojos and even when I can’t understand the teacher, some of concepts are visible in the demonstration.  Moving from the center, clear intention, proper footwork: I’m pretty sure that Sensei touched up on all of those.  Control and submission in locks were emphasized more at this dojo than mine; the instruction here was (or at least seemed to be) more martially focused and ending the technique with a clear demonstration to uke that they could not move because one more inch of movement on the wrist equals pain.  The people that I worked with had very clear, powerful structure in their arms, which was a joy to feel.

If you’re ever in Taipei, check this place out.