With the cabinet modified to fit the fridge, it was time to reinstall the cabinet, connect the power, and have a beautiful new fridge.  But first things first, cleaning!

The wall panels behind the van had probably not been cleaned since 1991 and after looking at the desolate state of them, one thought came to mind loud and clear: I want to clean everything.  Similar to when you clean your sink only to notice that the rest of your kitchen is now filthy, the cabinet to the left that housed the water tank became twice as dirty in the span of seconds.  Since the water tank and cabinet housing it are only accessible after the fridge cabinet has been removed, it seemed like a good time for some extra cleaning.  As you can see, it was filthy.

Thankfully, removing this other cabinet was much more straight forward: just some screws on the inside of the closet and a screw in the storage space under the back seat.  If you do this you will also need to remove the electrical outlet, which is probably the most time-consuming aspect of the project but still pretty simple.

Having both cabinets out also allowed me to take the water system fully apart, buy new water lines, and sanitize everything (even if you don’t brew, I highly recommend having some One Step on hand at all times), including the water tank.  Now I know for certain that we can drink any clean water that we put in the tank and can stop wasting space with gallon bottles of water.  Cleaning and replacing the water lines might have been one of my favorite upgrades from this, because it was filthy before.  Take a look at this hose inside the tank, which I thought was black.

It was not black, or at least not originally.  In fact, it was so dirty I had to stop everything I was doing and run inside to show Shiz.  Uhhhhh.

With peace of mind and a clean van, it was time to re-install the cabinet and hook everything up. 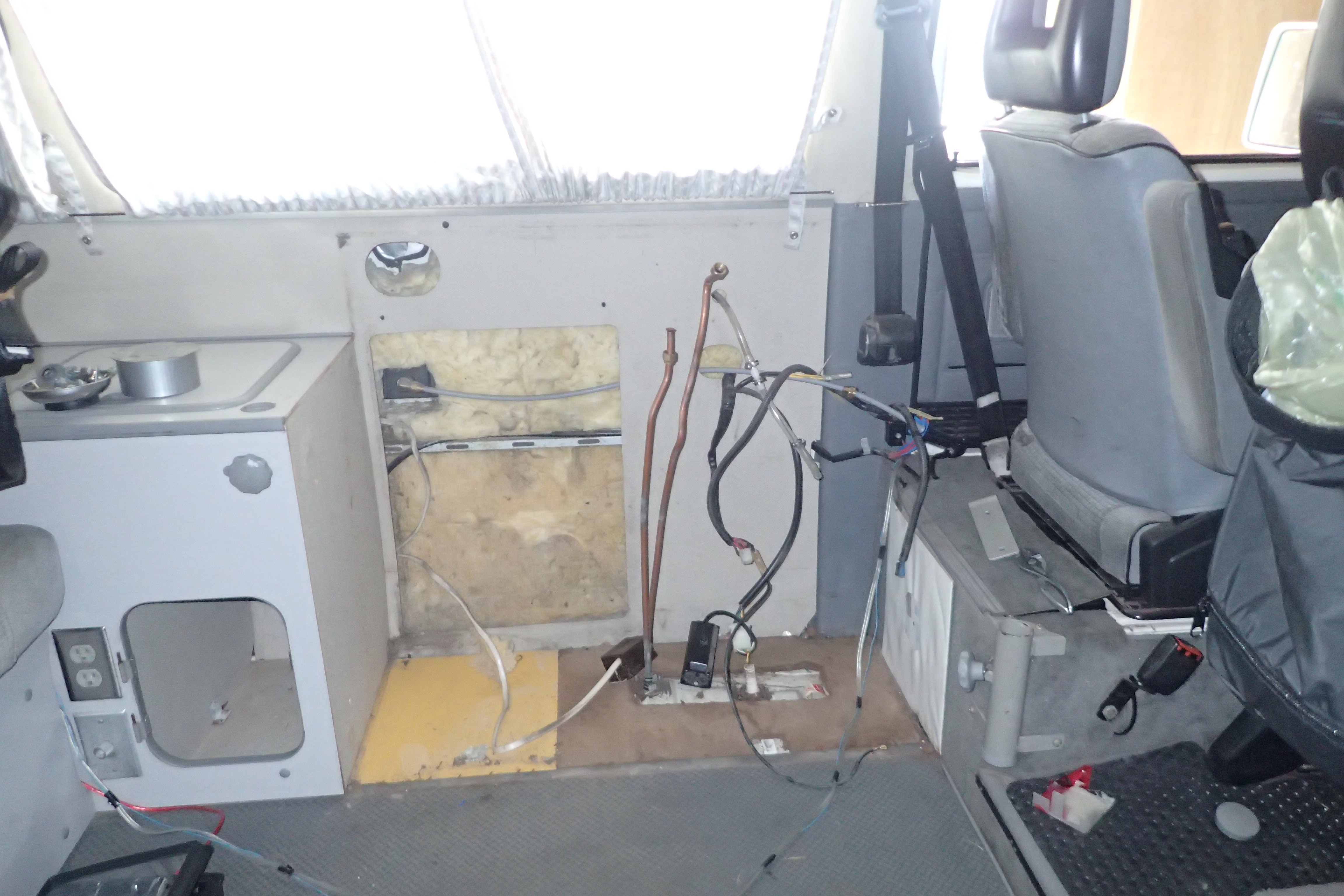 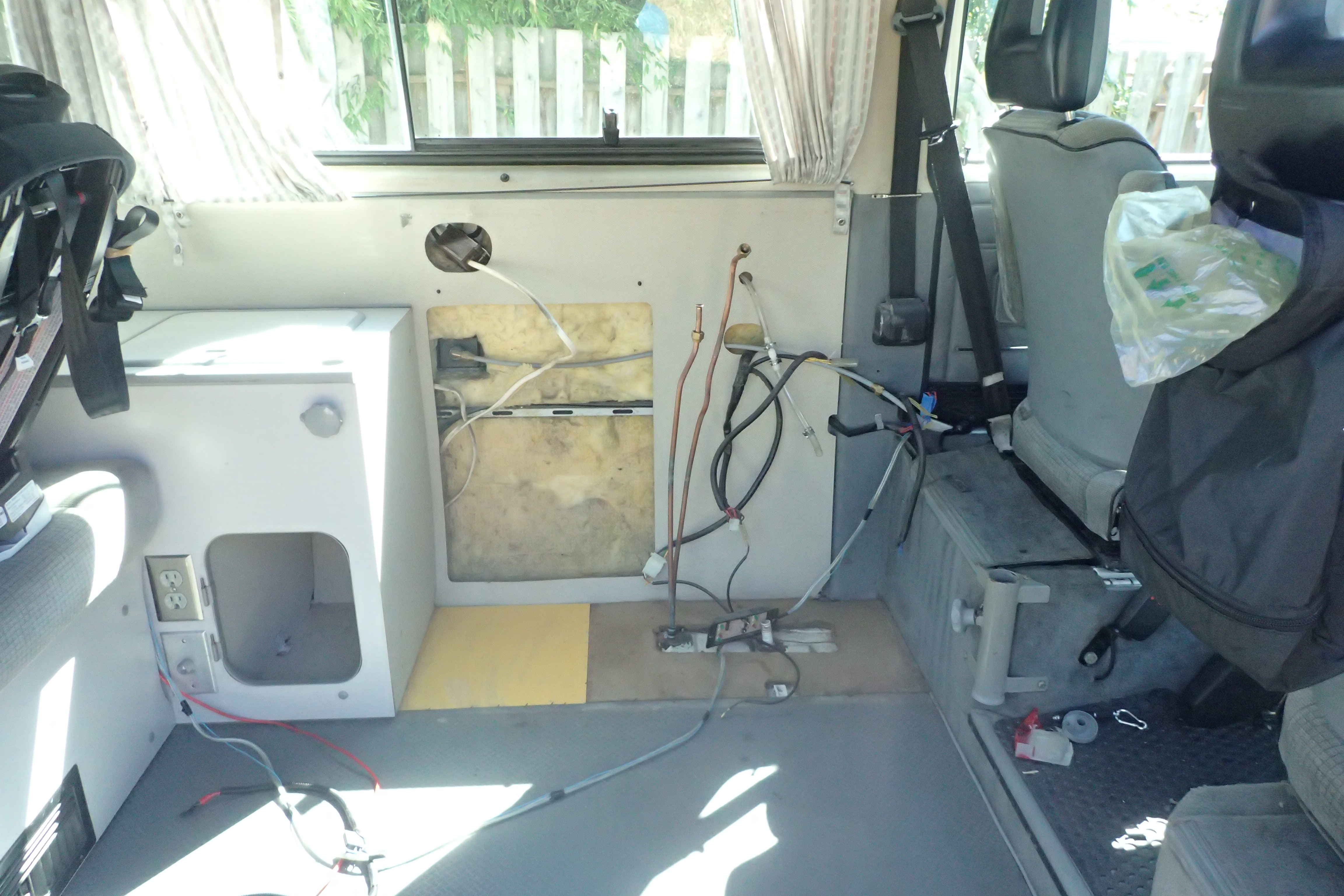 As the new fridge is larger than the stock one, it sits deeper and wider than what it replaces.  To accommodate the larger fridge, I needed to cut a larger opening in the wall panel and switch the locations of the water intake hookup with the electrical hookup, as the water intake would butt up against the back of the fridge.

First off, the wall.  This was very simple, just measure the fridge, trace the new cut, and cut with a jigsaw, being careful not cut through any water lines behind the panel.  The height of the fridge requires drilling two holes for the running clips on the water line, which are easily done with a 17/64 drill bit.

I also took this time to remove the propane feed to the stock fridge by cutting the line and capping the fork on the propane under the truck.  We’re looking to install a heater later on, so it made the most sense to cap the unused fork.  I also closed up the hole where the propane line came through the floor.

Next up was swapping the water and electrical hook-ups, then covering the hole for the old propane vent for the fridge.  The covers for the hook-ups come off with a Philips screwdriver from the outside (that makes me feel really comfortable), then it’s simple to swap them and re-attach.  You can buy replacement covers for the vent, but I just used a couple layers of duct tape on both sides and put some insulation over it.

With all that done, the place was finally ready for the cabinet.  Whew!  Line it up to make sure everything is good:

and then carefully slide the cabinet over the propane feed for the stove.

It fits like a glove!  It also fits a Shiz.

I re-attached the propane line for the stove and made ready to put the shelves back.

As the central dividing panel had been moved over an inch or so, I needed to cut the shelves down to match.  It was pretty simple, but I decided to cut the right side as both panels have notches for propane lines and I might as well save myself the effort.  Since I replaced every other water line, I also took this time to replace the drain line for the sink.

Everything was set for the fridge and looking great!  I disconnected the battery, made sure that all my new electrical connections were tight, and put in the fridge.

The end was near!  We’re someday going to put a heater under the fridge, but in the meantime we’re going to have a small sliding drawer, so I put some wood under the fridge to both support it and act as someplace to install the rails.  Upon reflection I could probably have just used L-brackets to support the fridge and gained a wider drawer, but I’m not too worried about it.

I did not take into consideration, however, the little bit of propane lead coming from the floor, which my central divider now exists over.  It meant that I had to notch into one of the fridge supports (Why, hello, router) and it worked like a charm.

I put a slim piece of wood under the fridge to make it look better and protect the underside of the fridge.

I put some rail guides on the insides of the wood and built a little drawer, adding a little extra space.  I don’t have photos of that, but I do have a pretty and functional fridge!!!  It was a lot of work, but if you’re looking to upgrade the Westy stock fridge I think the larger fridge is well worth the effort.