Like any Westy owners, the list of things that we’d like to improve is lengthy.  Before we head out on this trip, however, we need a new (and properly functional) refrigerator.  The stock fridge only cools to 40 below ambient and we need things cold.  Things like beer.

After some research on the web, we narrowed our choices down to the Truckfridge T49 and the Truckfridge T65.  The T65 is bigger, but the T49 fits right in place of the stock fridge without any adjustments to the cabinetry.  The T49 is a much simpler swap, but the T65 offers more room.  In the end we decided to go with the T65 since we’ll be spending so much time in the van and after the numerous weekend nights of work on the van, I’m glad that we did.  The larger fridge is a blessing, I learned a lot about Westfalia cabinetry assembly, and I was able to clean places that hadn’t been touched since the early 90s.  Heads up: this is going to big one lengthy post with lots of pictures.

I ordered the fridge straight off the Truckfridge website and figured that this was a good time to pick up a service manual as well.  With these two things in hand, I was ready to start in on the fridge. 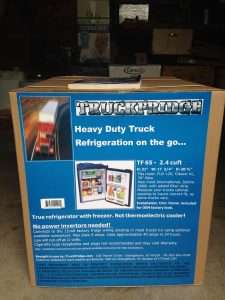 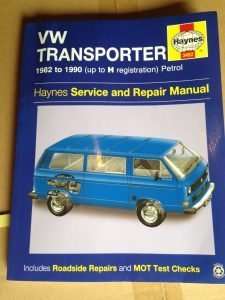 A side note on the manual: There are two options for manuals, Haynes or Bently.  While the Bently is considered the bible of Westy repair, I bought the Haynes because it is smaller (250 vs. 1,400 pages), but after using the Haynes I wish I bought the Bentley instead.  The Haynes is a good manual, but I’d rather have the more thorough book.

Enough of that, though: onto the fridge!

As mentioned above, the T65 is bigger, wide enough that to install it requires moving the central divider in the cabinet to the right.  How far?  Just an inch.  To make this move I’d have to remove the entire cabinet, separate each piece, glue it all back together, then reinstall the whole thing in the van.  And just to set this to hard mode, I could only work on it after 7PM, once Fin has gone to bed.  So here’s everything that I did for one inch of space.

The first thing to do was take the stock fridge out.  It’s pretty straightforward as the fridge is held in place by screws on the front, right, and left sides.  They’re easy to find and simple to remove.

I had to also to unplug the fridge (the white connectors in the photo on the right), close the valve on the propane tank, and disconnect the propane feed from the fridge. 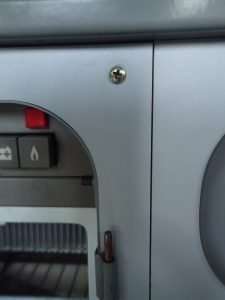 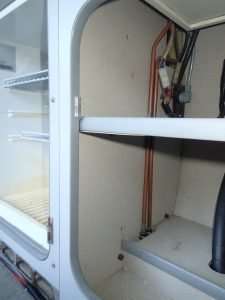 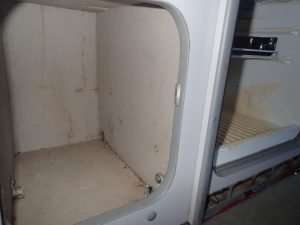 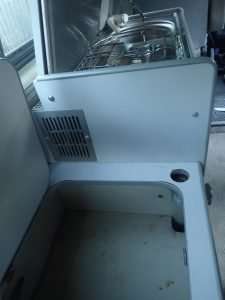 Then, I removed the ventilation cover on the outside of the van and unscrewed the propane vent . 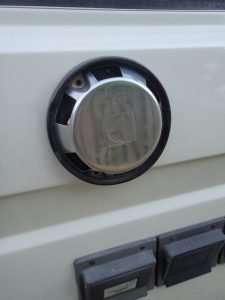 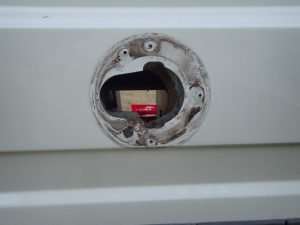 The next step required removing the entire cabinet.  Like the fridge, it’s as straightforward as unscrewing some stuff, but this involves vastly more screws, unscrewing the propane line, and disconnecting the plumbing.  I went ahead and took the range off now as well, since moving the cabinet would be bulky and I wanted it as light as possible.

I removed the drain hose and disconnected the clear pipes that feed water to the sink.

I removed the drain hose and disconnected the clear pipes that feed water to the sink. 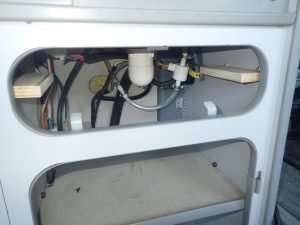 Then I removed the electrical socket that the fridge used, followed by the j-bracket holding the right side of the cabinet to the van. 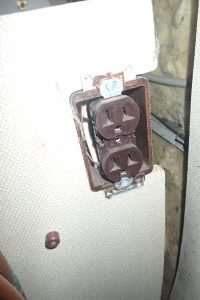 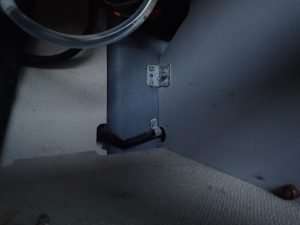 Following that, out came the screw holding the cabinet to the floor and then disconnecting the wires to the breaker behind the driver’s seat. 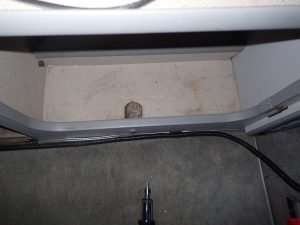 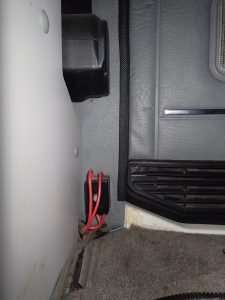 All that remained was to carefully pull out the nails holding the shelves in place.  There’s a rubber coating around them that bends easily, so I was very nervous to pinch the rubber.  It was a little tougher than expected, but they came out easily enough in the end.  Since pliers will pinch the rubber around the nail, I think it is better to pull the nails out of one side underneath the shelf, but it honestly doesn’t make too much difference. 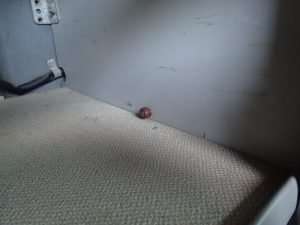 Next up: remove the range.  I started by taking off the cover where the arms attach, then the screws on the hinges.  The right side hinge screw was pretty straightforward with a Philips screwdriver and needle-nosed pliers, but the left side is a little more labor intensive as you need two pairs of pliers since the metal cover for washing dishes connects here.  A little more hassle, but not much. 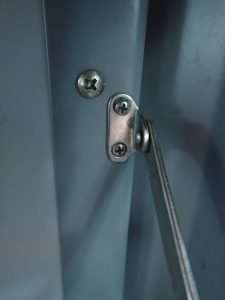 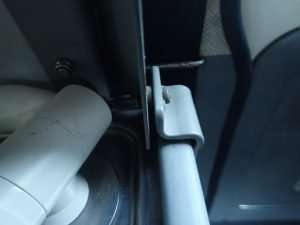 With the range cover off I then removed the face plate.  This was easy enough to do by removing the knobs and cover for the water and battery indicator, then removing the screws on either side along with three screws on the bottom (not pictured, but they are very tiny screws located left, right, and center). 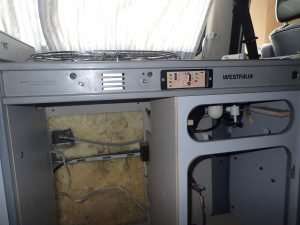 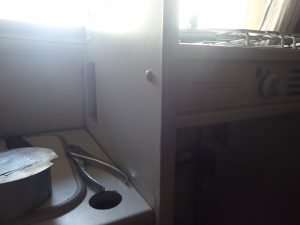 I gently removed the face plate by lifting the bottom out and up to provide access to the back of the 12 V connection.  Once I could pull the wires free, I unplugged it and was finally able to remove the face plate. 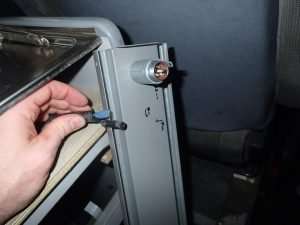 After double-checking to make sure that all the screws on the cabinet have been removed, stored safely, and labeled, I was ready ready to lift the cabinet up and out!  The propane lead to the range was still sticking up, so I needed to be very careful not to damage it while I lifted the cabinet high enough to clear it.   Since the Truckfridge is fully electric I could have broken off the propane lead for the stock fridge, but didn’t.  Since the lead to the range was there either way, it didn’t make any real difference.

Carefully lifting the cabinet up and out, the first step was complete! 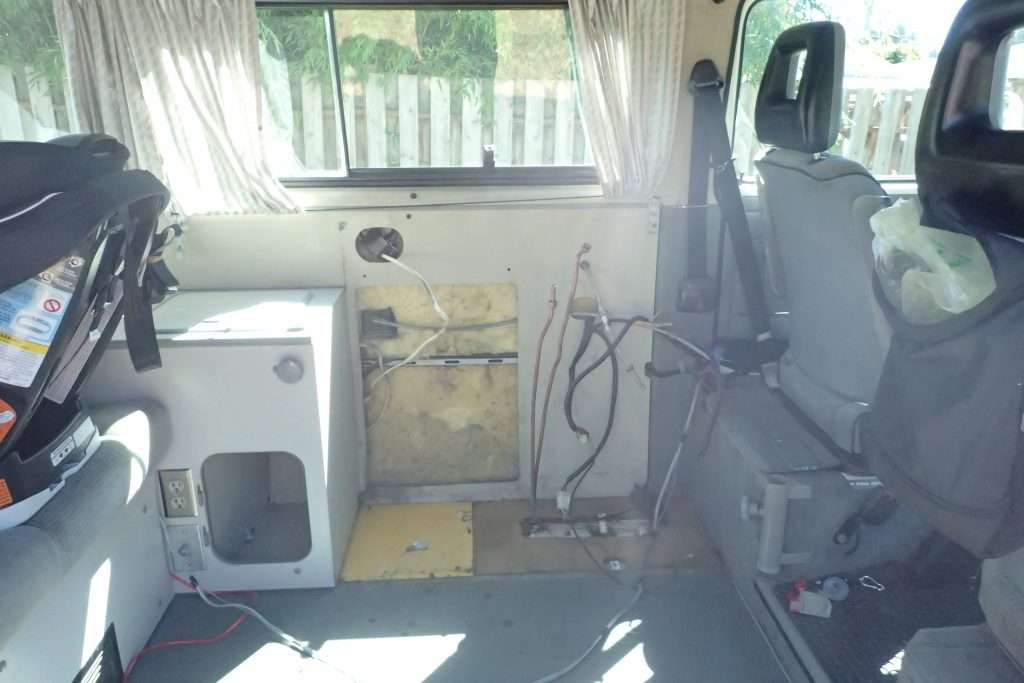 All my hard work was dutifully rewarded with a Tanya Pea LP (couldn’t find a link to the songs) and $6.97 Canadian.  So I guess the next project is to hook a turntable up to the stereo….

To break things up, I’m going to cover taking the cabinet apart and putting it all back together in another post.