Hollow on the Inside – New England Carousel Museum

After the tourism tease that is visiting Gillette Castle in the off-season, we headed up to Hartford for a couple days of rest and exploration.  Sadly, our AirBnb was not about to give us any rest and Hartford’s most interesting attraction might be the Carousel Museum 18 miles East.  But first, the AirBnb.

We knew we were in trouble once we were 30 minutes away with no word from the owner.  After several messages with no reply, I called the number only to reach a voicemail that told us that this voicemail was not checked and to call the office.  No office number was given.  About 0.5 miles away from the place, a message came through saying that someone should be home but that the front door is usually unlocked anyways.  Great.

We arrived to find no one at home, all the lights off, and the front door locked.  The backdoor was open, thankfully, so I walked through there to let Shiz and Fin in through the front.  Checking doors on my way up, I passed by a couple of thoroughly messy rooms (imagine guys in the early 20s) before reaching the first floor.  Our rooms were upstairs, where all that waited to greet us were beds on the floor (thankfully they had sheets), a locked room which we should have had access to, and some toiletries in the bathroom.  The owner finally arrived and gave us the key to each room while he spent 30 minutes cleaning the house (we still had to sweep afterwards).  Things were not starting off well.

Things did not continue to go well as the owner – who did not live there – stayed until late every single night, his booming voice echoing into our almost empty rooms.  We consoled ourselves with the countdown to leaving the place and the thought of French pastries as rewards.  The other house guests were very nice, but the owner made this one of the worst AirBnbs we ever stayed at.

Perhaps this and the cold tainted our view of Hartford, but we didn’t really find much to our liking.  We stopped by the most famous attraction of the town, this: 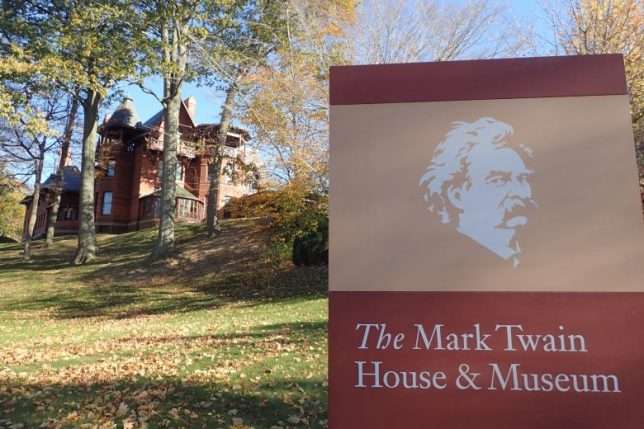 The building is is simply stunning and beautiful.  At $20 a pop, however, it was too rich for our blood, so we contented ourselves to walk the grounds and check out this gorgeous house.  We passed guides in clothes of Twain’s time and visited the front lobby, rich with decorations to one of the USA’s wittiest minds. 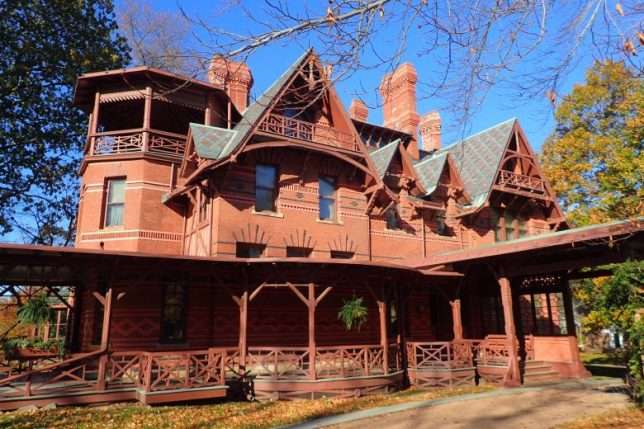 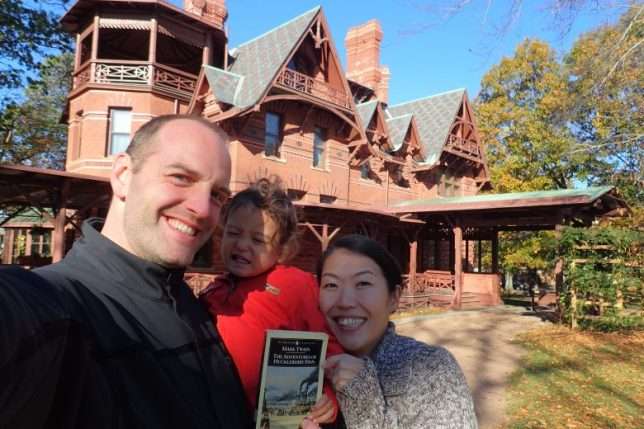 One more place on the agenda, however, proved to be much more interesting and rich conversation material than we thought: Jack the Presidential Pardon Turkey 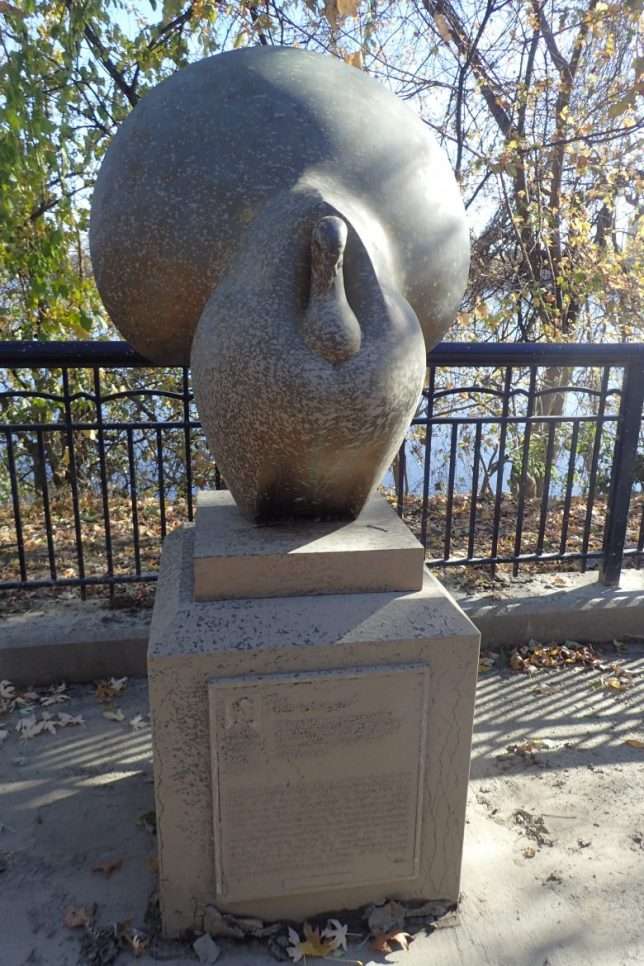 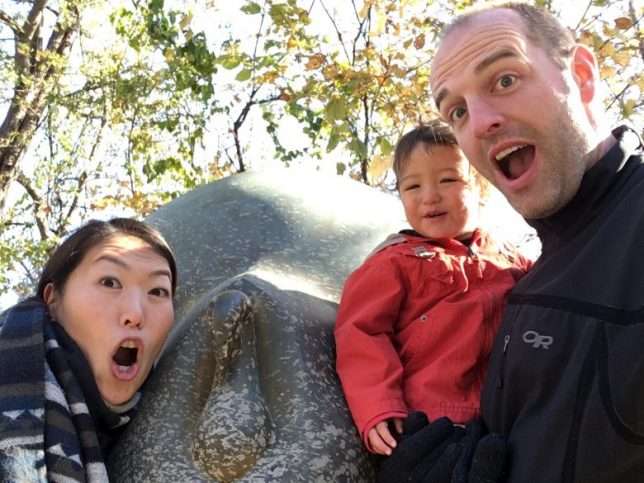 This statue commemorates the first turkey ever pardoned by a US president.  The turkey has nothing to do with Connecticut, but it does have something to do with Lincoln and the statue sits on the Lincoln trail, so it is not ultimately out of place.

Lincoln and family planned to serve a turkey for Thanksgiving, but Lincoln’s son Tad was fond of their turkey and cried when he heard what was to be done about it.  Graciously, Lincoln asked the chefs to pardon the turkey and they kept it as a kind of pet.  Thus, not only was the tradition of the president pardoning a turkey born, but the tradition of eating turkey was fully solidified, leading to the death of even more turkeys.

It’s a story the whole family can enjoy.

The highlight of our time in Hartford – and one I must recommend to everyone – was actually not in Hartford, but East in Bristol.  Even at a 30-minute trip one-way, the New England Carousel Museum is worth every second.  Carousels have never occupied a dear place in my heart; they’ve always just been there.  With Fin, though, we’ve been on a couple and the museum was having a festival that day, so we figured that worst comes to worst we’d ride a carousel and go home.  But it was so much more. 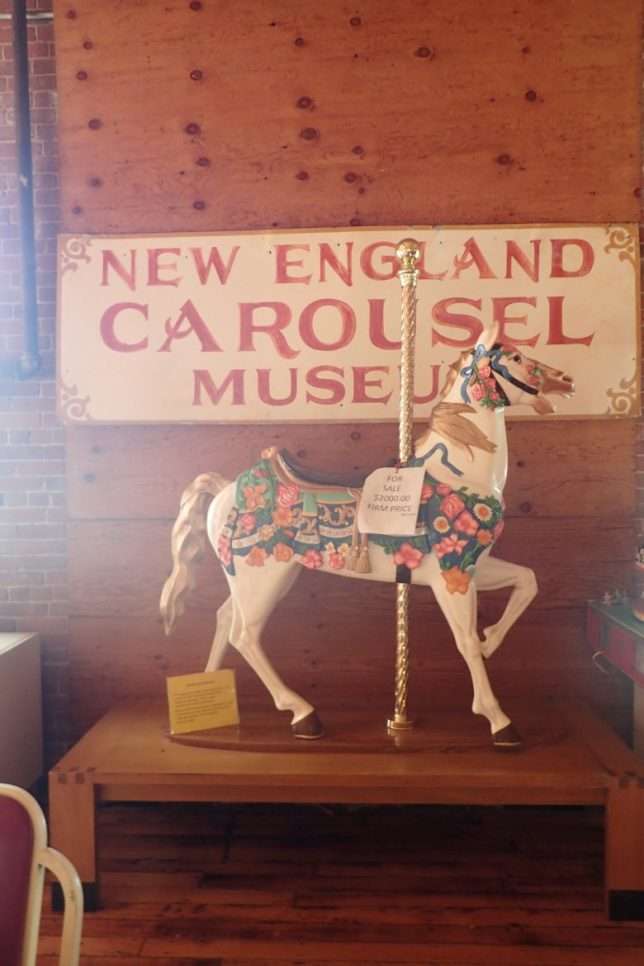 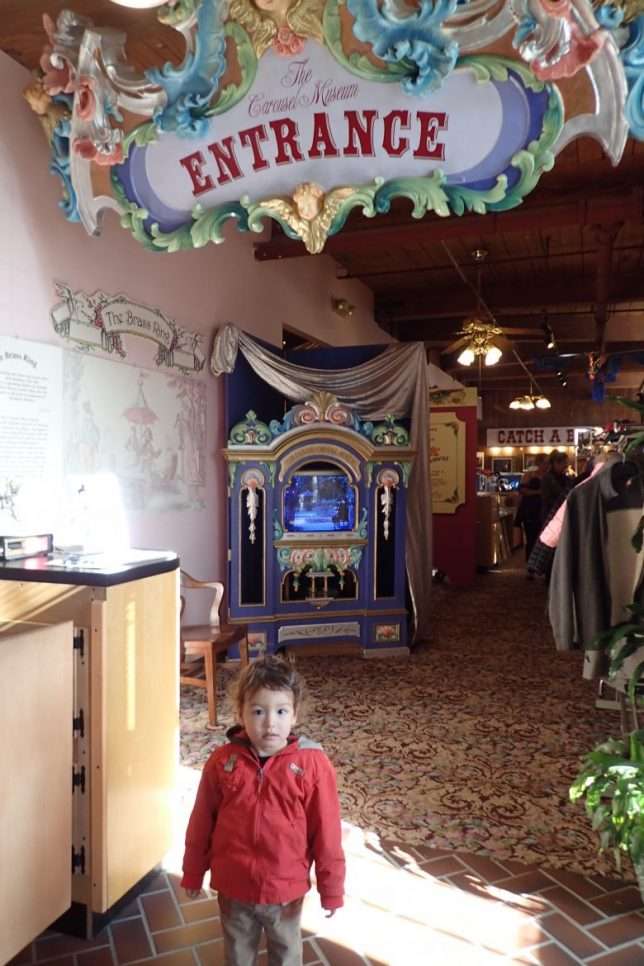 The history of carousels is actually really interesting.  An adaptation of a jousting practice where knights ride in a giant circle trying to lance a ring (a tradition some carousels still employ), carousels only really became popular in the late 1800s with the advent of steam power.  Before then, they were either pushed by human or, ironically enough, horses. 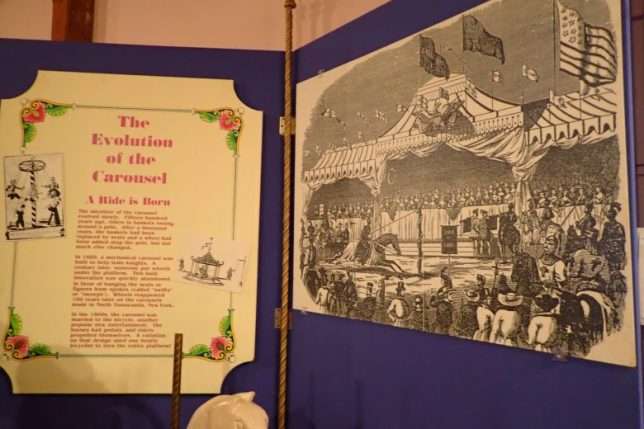 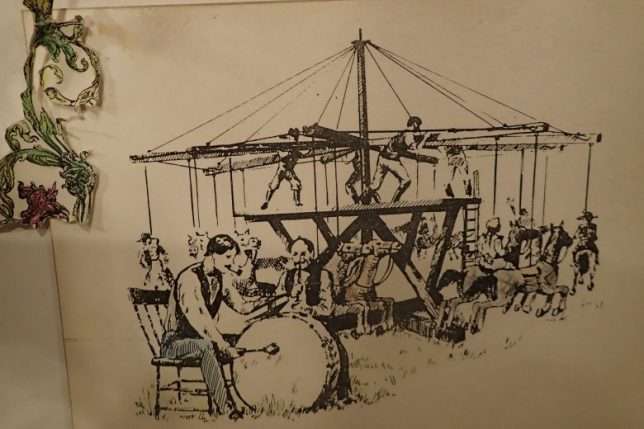 Steam enabled a larger, grander, and longer ride that quickly spread among men, since it was not socially acceptable for women or children to ride.  A growing middle-class and traveling circuses generated a massive boom in the carousel business.  Immigrants from Europe with skills in carpentry provided cheap labor with high quality results, as experienced carvers needed jobs.  The breadth of immigrants meant a lack of  a common language, so drawing the desired result on a wall and the delegating parts was the norm.  The outward facing part of the animal was saved for the best carvers, who were fierce in pride and talent.  Historians at the museum can even tell the carver simply from the silhouette of the animal. 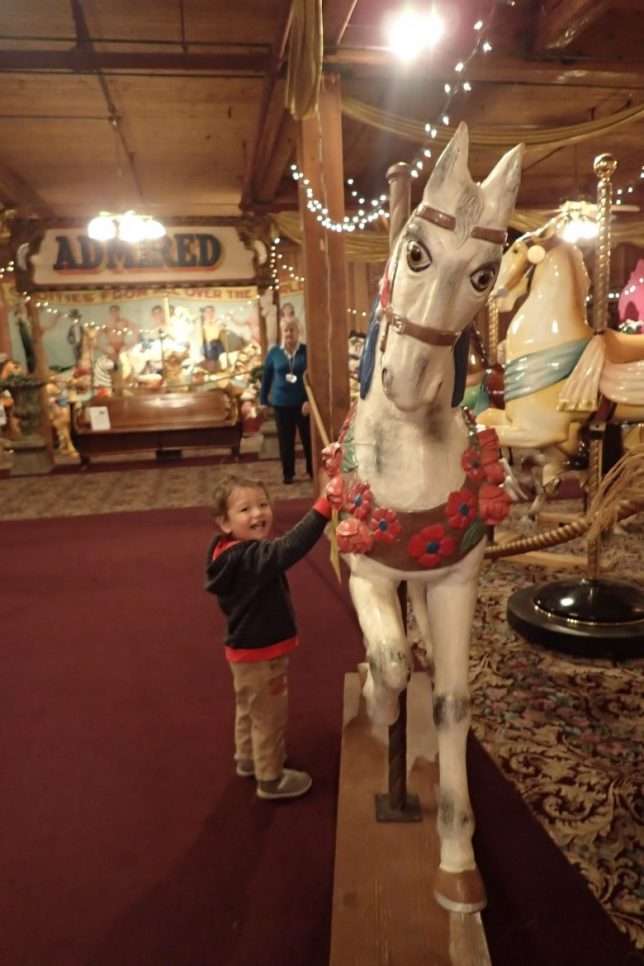 The carvers had customer galore in the new middle class, who flocked to places like Coney Island.  The popularity of Coney Island created its own style of carousel horse (the other two being Philadelphia and Country Fair), with Coney Island, carousels, and the middle class solving one New York City problem in one fell swoop.

Ever wonder why Coney Island is where it is?  The beach is nice, but a major reason was because of the weekends.  The trolleys experienced very regular fares during the weekdays as people went to work, but on the weekends revenue dropped as people stayed home.  So they helped build someplace to go near the end of the line: Coney Island.  Each amusement competed to bring more crowds and more interesting attractions, but one thing they all had to have was a carousel and the better the mounts, the more customers they attracted. 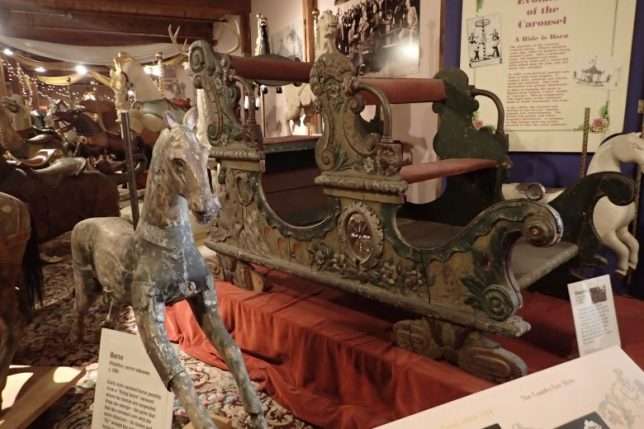 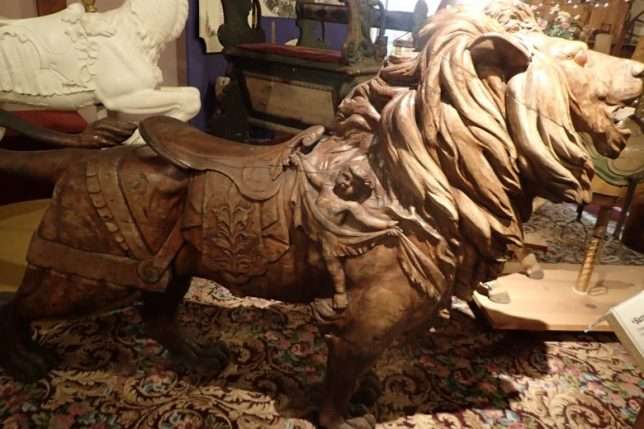 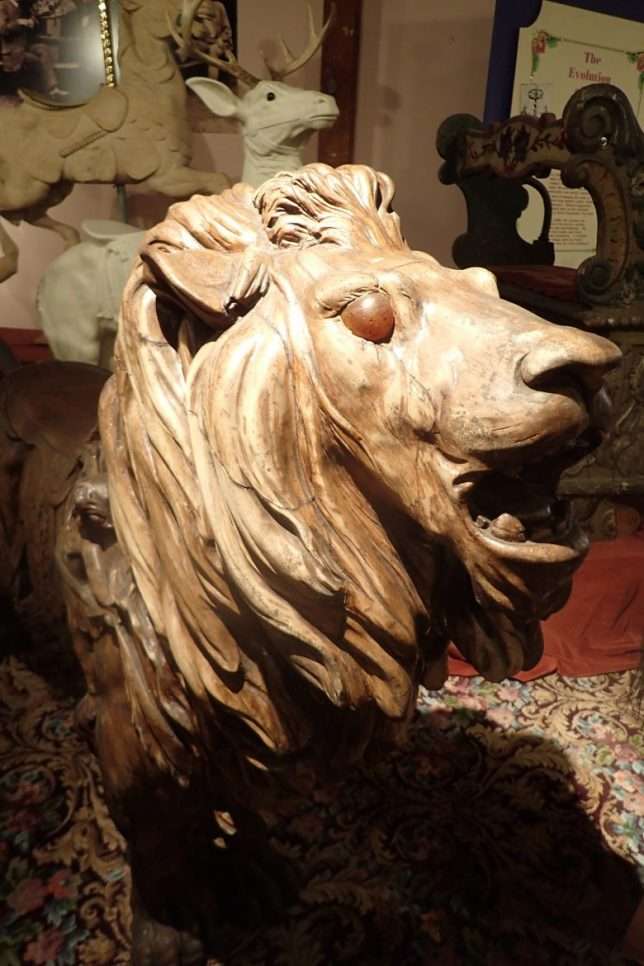 The above piece has been restored heavily, something the museum puts a lot of effort into.  Most of their pieces are loans from private collections, but they do restore private collections.  A section of the museum is dedicated to the restoring process, where I learned that mounts are typically hollow.  It’s one of those things that if someone had asked me to guess and I thought about it for a bit the answer would have been obvious, but the question had never once crossed my mind. 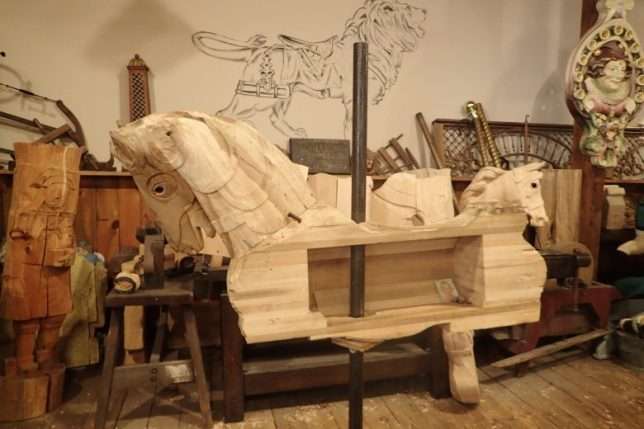 Hollow mounts with a small hole in the top means that restores find some really interesting stuff, like old tickets to the Irish lottery and other historic keepsakes.

They also featured unique and bizarre mounts that they had restored, like this cat. 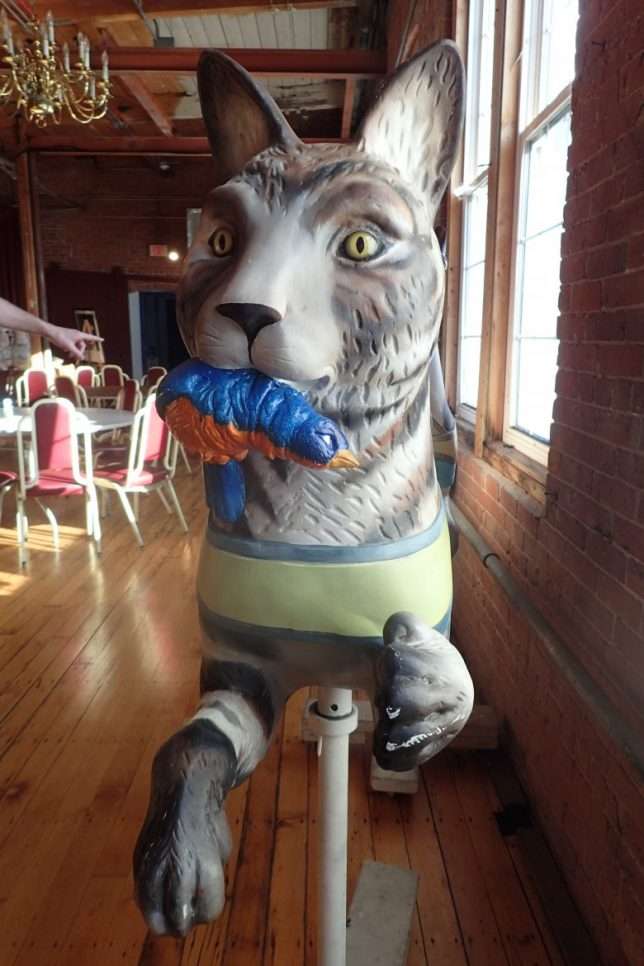 And, of course, being a carousel museum, they had a working carousel to ride. 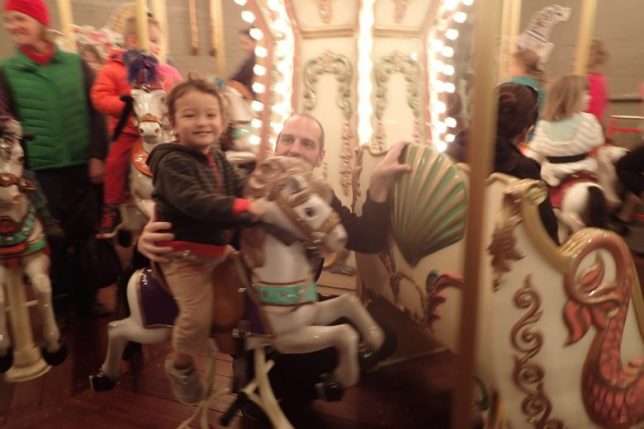 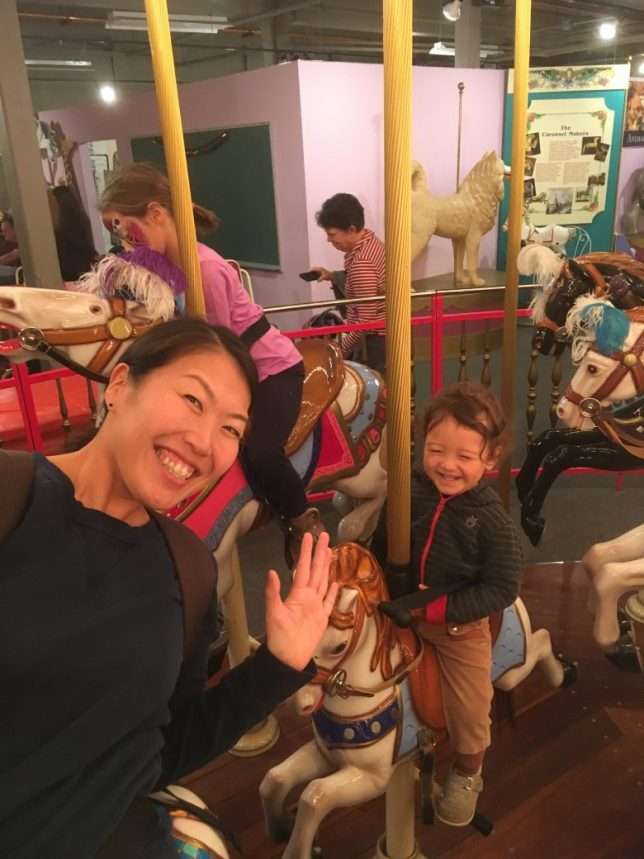 We had one last surprise before we left, which was a Coney Island style fortune teller that looked straight out of the movie Big.  The kid in me was ecstatic.  While it did not dispense fortunes, we got it to light up and move, which apparently is not that common.  So huzzah to that! 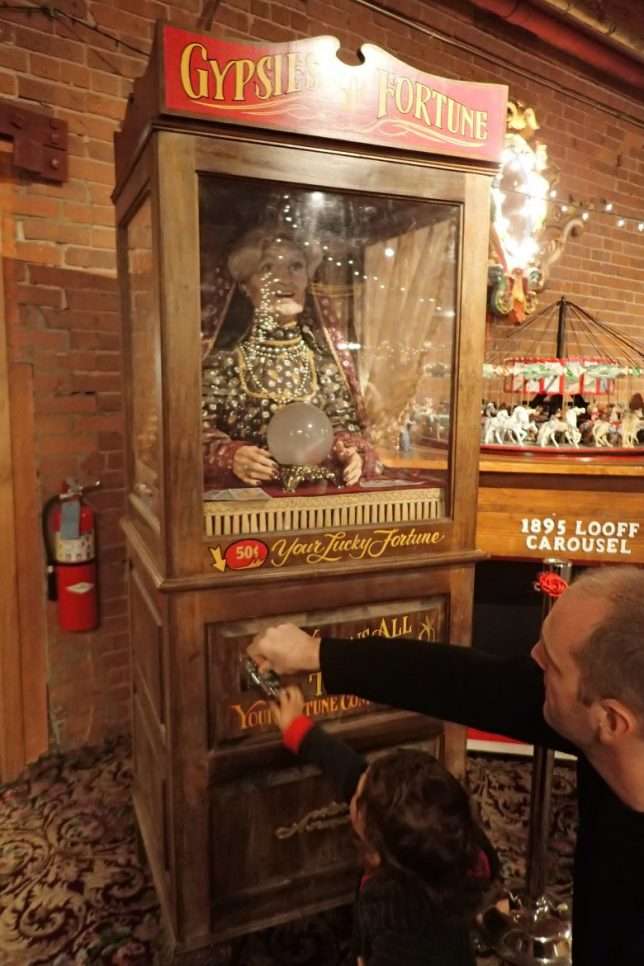 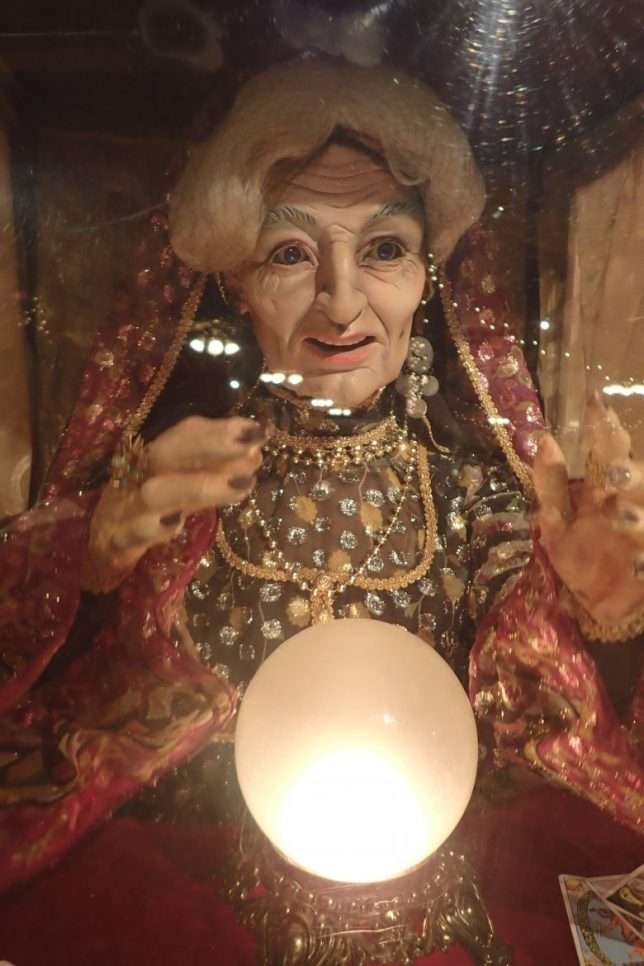 All in all, the New England Carousel Museum is a must go.