If You Bring a Child to Taipei…

Do yourself a favor and bring the family to a Parent Child Center.  Taipei has 13 of them around the city for parents to give their children fun, interactive, educational experiences, all free of charge.  That’s right, free!  We visited the one Da’an, which blew both of us away.  You’d never find anything like this in the USA nor Japan and if you found anything close it would not be free. 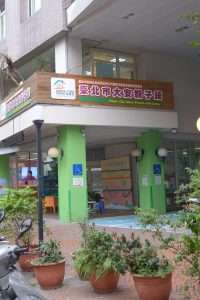 We set him down among some musical toys and he had a blast with some bells.  As we brought him to more and more toys we saw how so much of what they offered rooted itself in education.  From a giant felt globe that kids could stick animals on to reams of printer paper over easels, kinds were encouraged to explore, create, and learn.  Fin had a blast but most of the toys were geared for kids a little older, so we coaxed him over to the 1-year and younger room, which offered activities more to his abilities.

The room offered stars to climb, music toys, a piano, activity centers, counting blocks, stacking blocks, children’s books, and a world of age-appropriate toys.  He had an absolute blast and an hour-and-a-half later let us know in no uncertain terms that he was not ready to leave.  Sorry, kid. 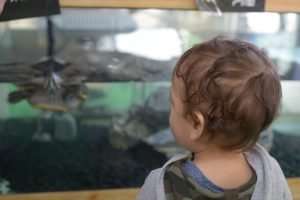 Fin and a turtle

Before we left we checked out the third floor for kids 4-6.  I wish I was 4-6, because Shiz, Fin, and I all had the same thought: “I want to play!”  Be it the giant lego blocks, the sand-painting projection screen, the stage, the shadow-puppet theater, or any other things there, I basically wanted to shove a kid out of the way and get to playing.

I’ve read recommendations for Baby Boss City, but in my opinion the Da’an Parent Child Center is a much better choice.  While I haven’t been to Baby Boss City, from what I can tell the focus is on letting kids pretend to do jobs.  Fin will work jobs enough in his life.  I’d rather he spend the day with activities that encourage him to explore and create, which is what the Parent Child Center is all about.

They have morning and afternoon sessions everyday save Monday.  Here’s a link to the English version of their website; location centers are listed on the right:

Plus, look at the toilets.  I mean, come on. 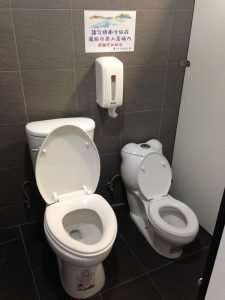 The family that troupes together, poops together.