The Way Fish Was Meant to Be – Pensacola

We left Manatee Springs State Park to traverse Florida’s panhandle on our way towards The Big Easy and destinations further West and while we didn’t have loads of time, we weren’t about to jump on Highway 10 and miss the scenery, so we took 98 along the coast.  It was the right decision, but did mean that trying to do anything so foolish as find a campsite near the Apalachia National Forest during snowbird season was nigh impossible.

Nigh, though, because we lucked out and nabbed a space on the St. Joseph Peninsula, which was iconic coastline with sand dunes, lovely beach, and birds galore.  They only had space for one night, however, so it was a short-lived love affair before driving out early the next day.

So the next brought us to Pensacola, where we were informed that beach camping on some stretches near the Gulf Island National Seashore was okay, which meant camping right next to the beach.  Enthralled with the idea, we knew that the area was famous for shrimp and so had to stop somewhere to get some food.

And get food we did.  We chose a seafood store at random and bought a pound of the freshest shrimp I’d ever seen and then complimented it with a pound of sushi-grade salmon.  The place was completely rad and everything we bought cost less than $20.  We were instant fans. 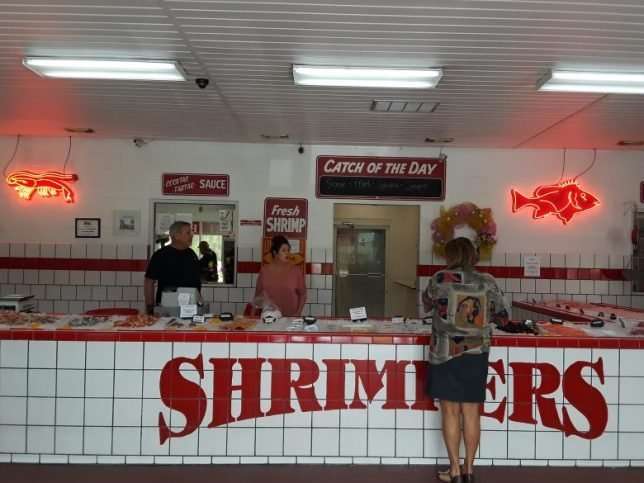 Dinner was taken care of, all we had to do was find a place to camp.  And we found this one: 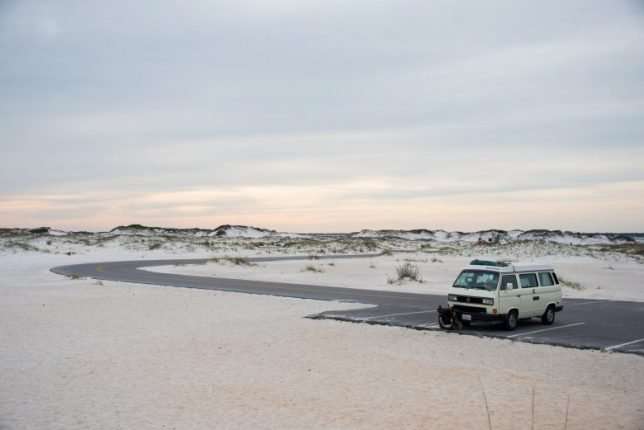 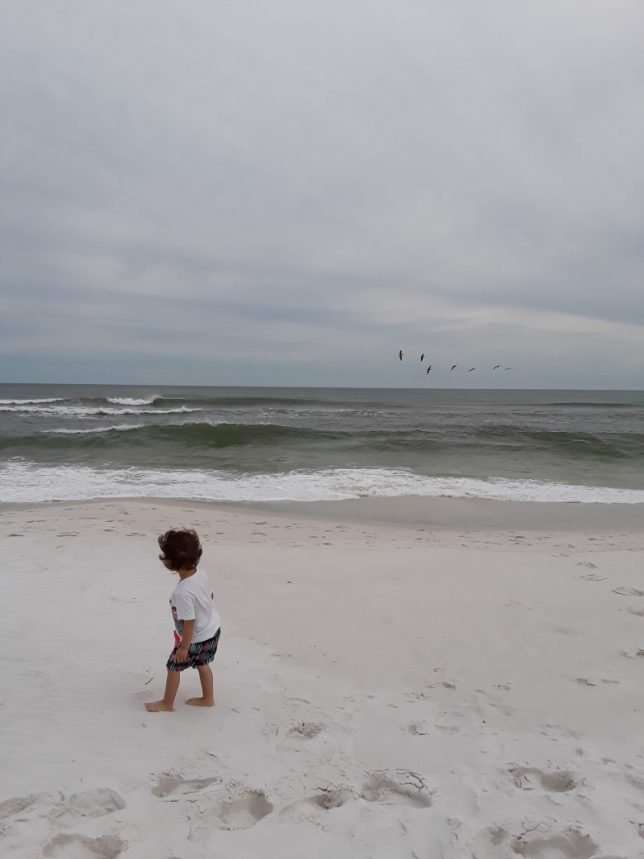 That was where we camped and the ocean was 100 meters behind Shiz as she took this photo.  It was majestic.  We got there early in the afternoon and just played on pristine sand that literally squeaked as we walked over it, then ate like royalty (well, gypsy royalty, at least.) 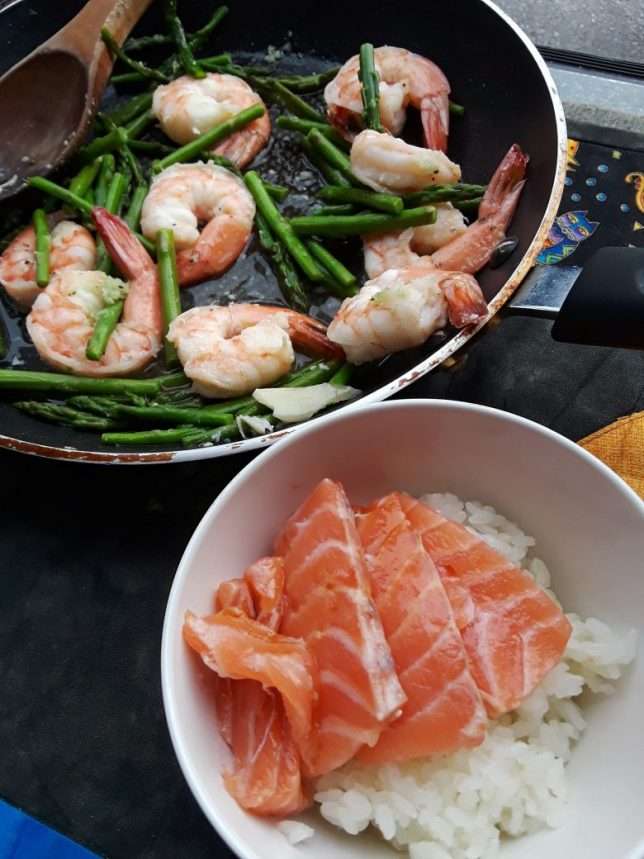 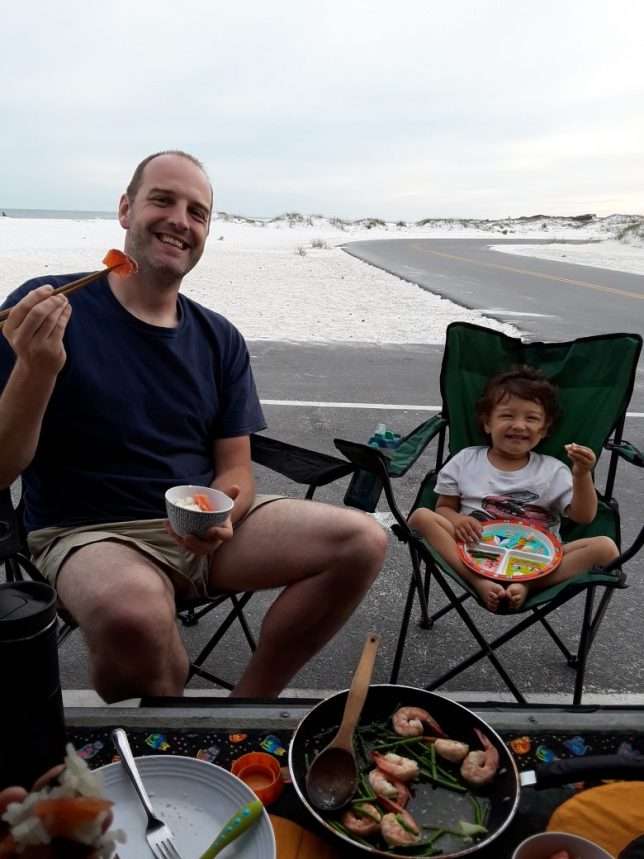 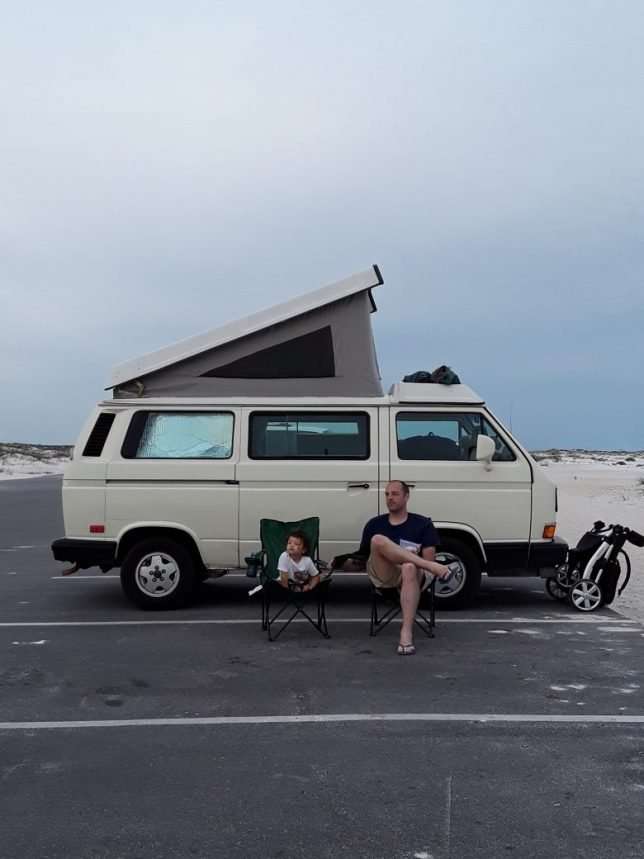 Sunset came and we fell asleep with full bellies to the sound of crashing waves.

Until about 11 at night.  That’s when we saw the flashlight wave into our window.  I waved to the person so that they wouldn’t knock on the window and wake up Fin, after which I hopped down and talked to the cop who was patrolling the lot for overnight campers.

Apparently 2018 was the year that they decided to crack down on this, because the year previously they would have things like people setting up their Class A trailers for a couple days, including strings of lights strung around the camper.  The cop was really polite and kind about the whole things, but a sign on the premises would have helped a whole lot. 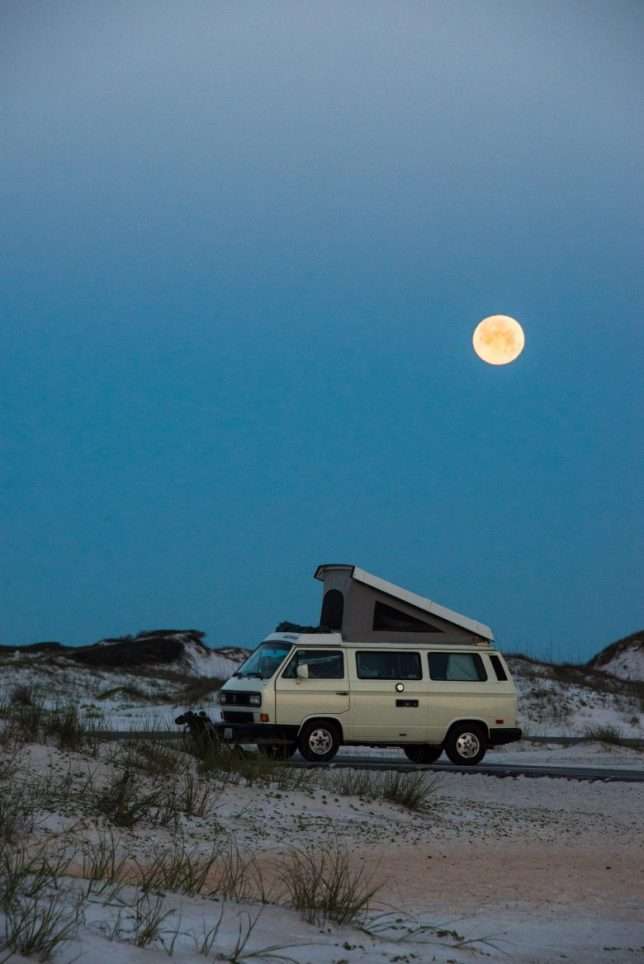 We were obviously camping, so he couldn’t wave us off somewhere else and we have Fin asleep either way, so we couldn’t’ move.  He had to write us a ticket.

He walked back to his car to write the ticket and while he did I put on more than underwear (glad I don’t sleep naked) and told Shiz our predicament.  Thankfully the cop told us how to keep the ranger coming by at 1 AM from bothering us and that we could stay the rest of the night without receiving any more fines, but we were definitely getting a ticket.

After finding out about this place, Shiz and I had spent the drive form the fish store ecstatic that we could spend the money we saved on an RV park (typically $40 or so) on scrumptions sea creatures, a high that lasted past us lying down to go to bed.  Turns out, with the fine, we counted our caviar before it hatched. 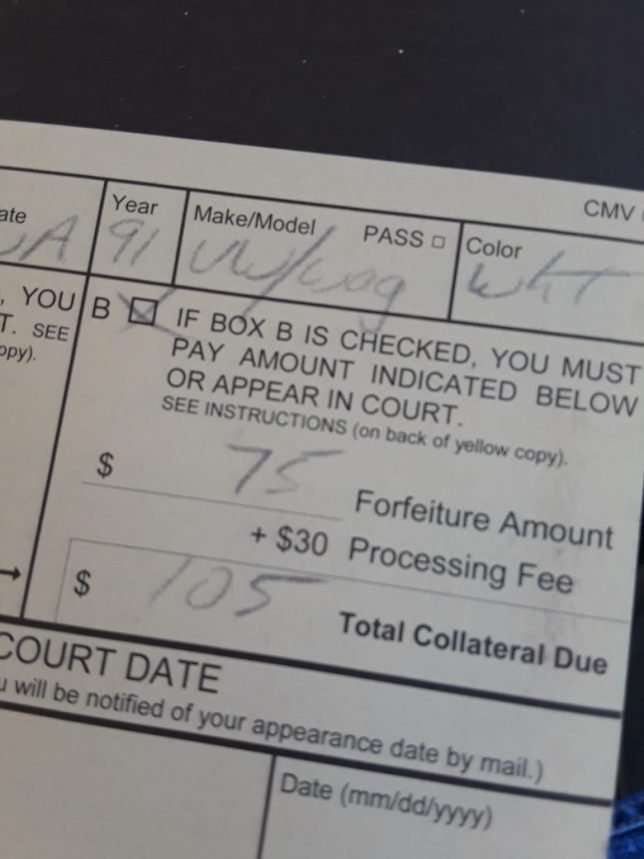 When life gives you a ticket, you swear, pay it, and move on (provided that it was given for a good reason).  We were bummed about the fine, but everything in the day leading up to it was so good that i honestly cancelled all of that out.  Seriously, the fish was that good.

We had no idea.

On the beach, we met a couple from Pensacola who told us about a fish store, Joe Patti’s, that was worth checking out.  Never ones to shy away from fresh shrimp and sushi-grade gills, we swung by on our way through Pensacola.  It was the only place we went in Pensacola, but we did talk briefly about whether fresh fish would balance out what we imagine what living in Pensacola might be like (my apologies to Pensacolans, I am judging your town on partial knowledge).  Joe Patti’s is that good.

Joe Patti’s is so good that we still talk about it.  I tell anyone who might at some point perhaps be going near Pensacola about it.  This place is phenomenal. 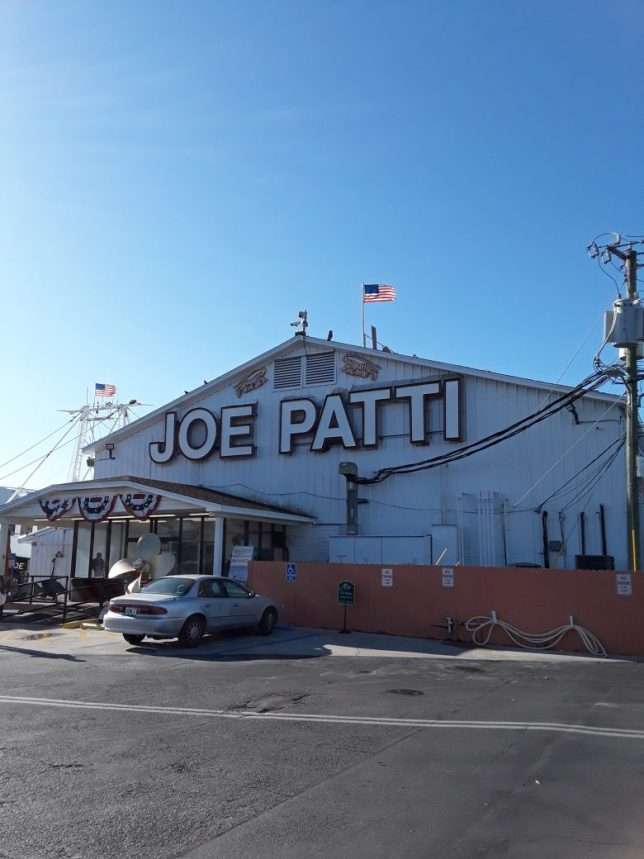 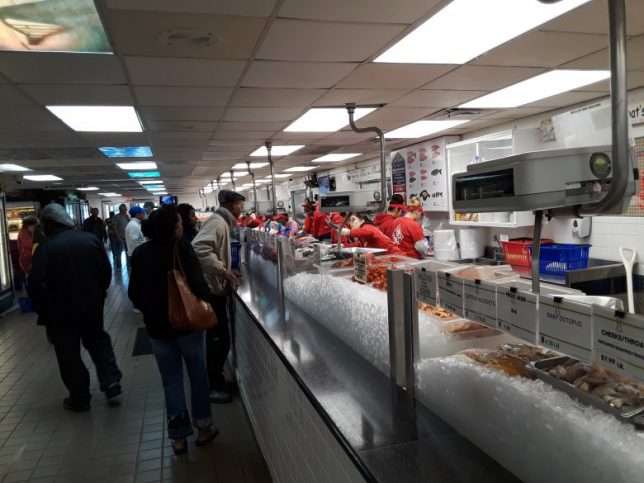 It’s essentially a long ice counter of every edible thing in the sea close by.  The selection was amazing, the prices were ridiculous, and the food is just so, so good.  If we lived in Pensacola, they would know us by first name. 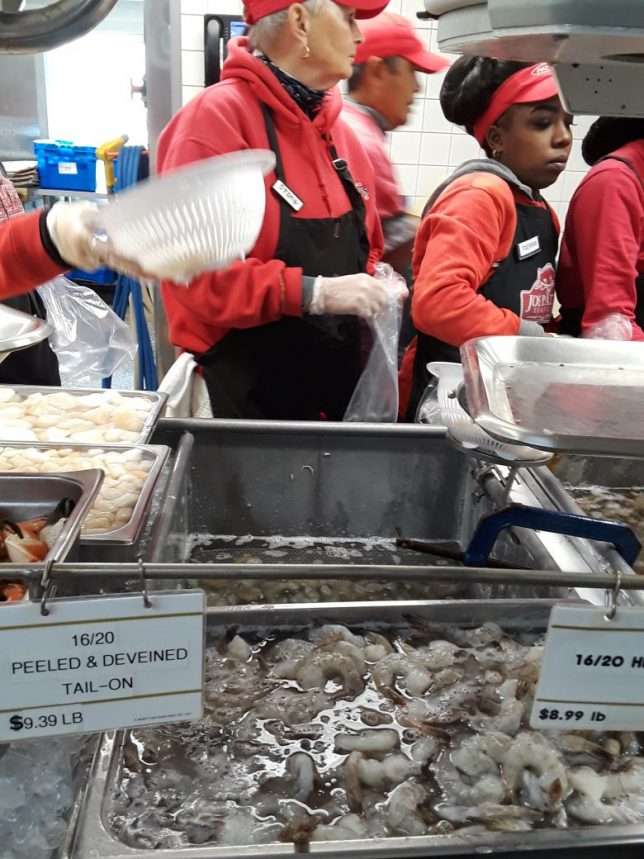 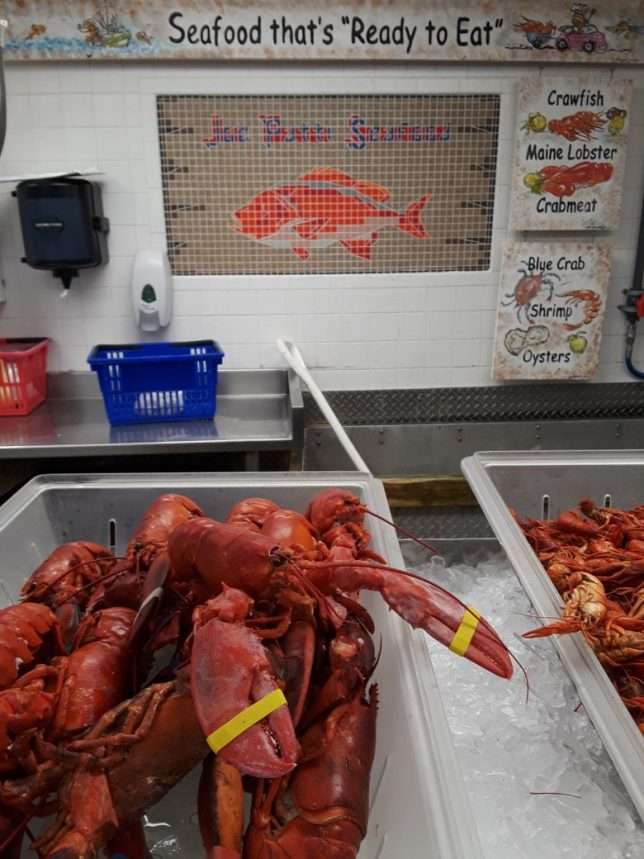 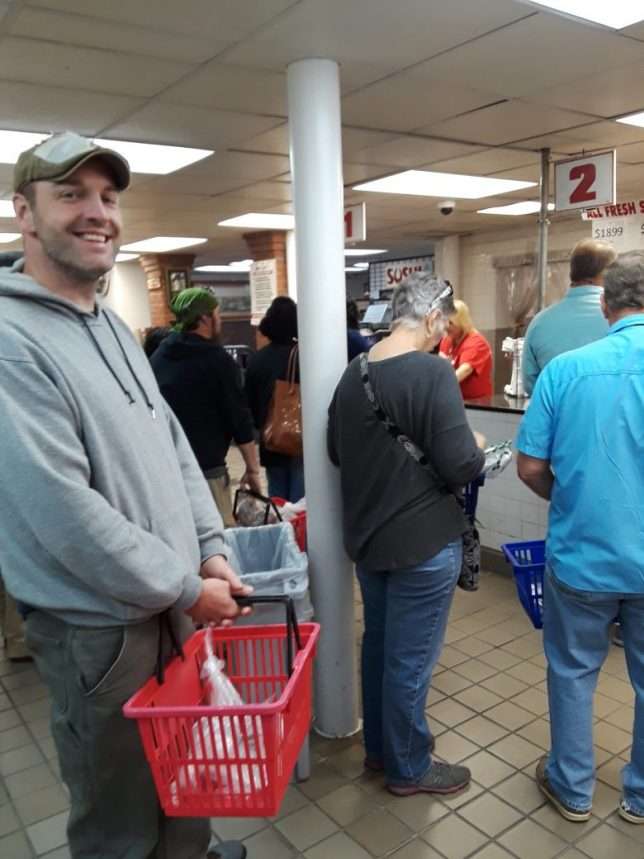 Seriously, if you are anywhere close to Pensacola, this is worth the stop and the detour.  Just go there.