After a glimpse of the old Spanish West, our travels took us further West in Arizona.  We camped in Gallup near Red Rock park, a wonderful place to spend a day or two and walk up a dry (season dependent), interesting canyon.  It’s probably not somewhere many people make a destination, but well worth the hike if you happen to be driving through the area.

We stayed there to make sure that we had a full day to check out the park on the Arizona border, the Petrified Forest National Park.

We stopped by the ranger station on the North side to get info and learned that the park is essentially a long drive with many short hikes.  We figured that it wouldn’t take too long, so we decided to stop at as many places as we could.  The Northern part took us by the Painted Desert and it’s not hard to figure why they named it that.

We were blown away. 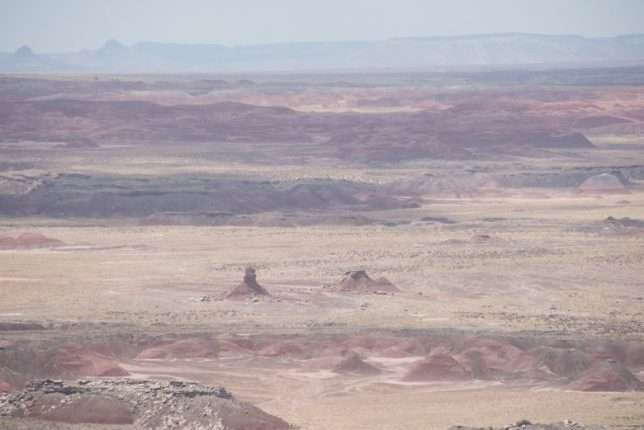 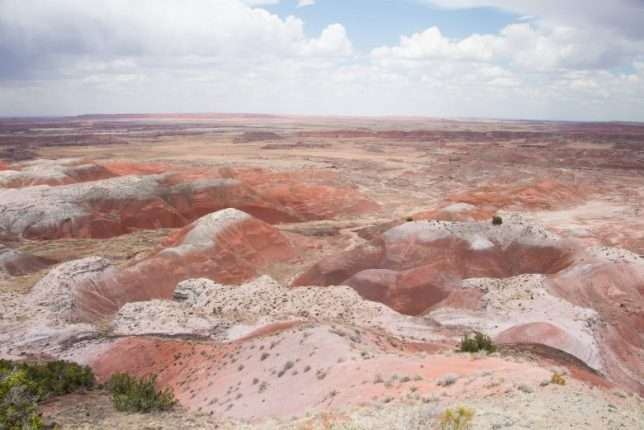 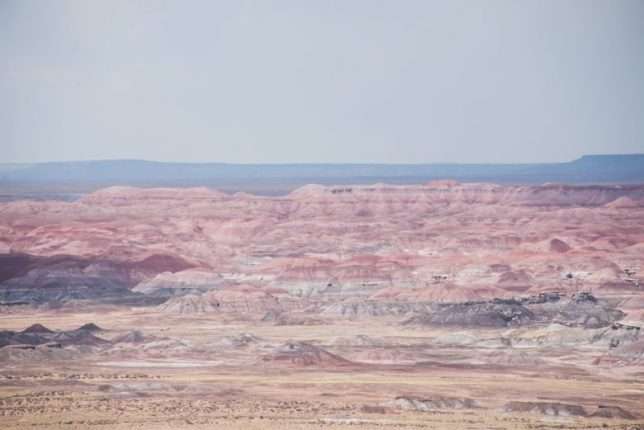 As a human being, you don’t walk through this place without finding it amazing, so it came as no surprise to find archaeological sites here.  Sites are scattered all around this massive desert, but the site on this route seemed to be a large one with a good-sized complex.  The layout was simple, with some petroglyphs on the rocks down a hill. 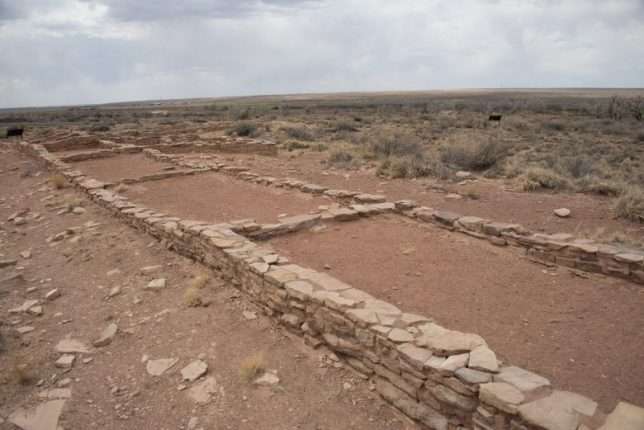 For some reason, however, the largest concentration of petroglyphs by far was to the South, a decent distance away from the dwellings at Newspaper Rock.  As the name implies, the rocks in the area are simply covered with petroglyphs, though try as we might, we could not figure out why they were there.

Why not place them closer to where people lived?

Why place them on rocks facing a cliff, where no one can see them easily?

It was all very strange, but beautiful. 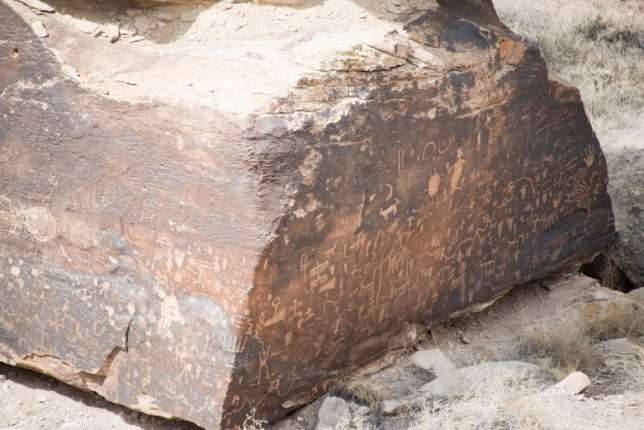 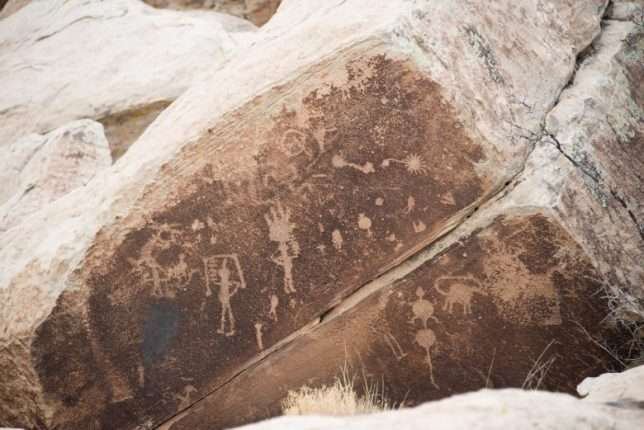 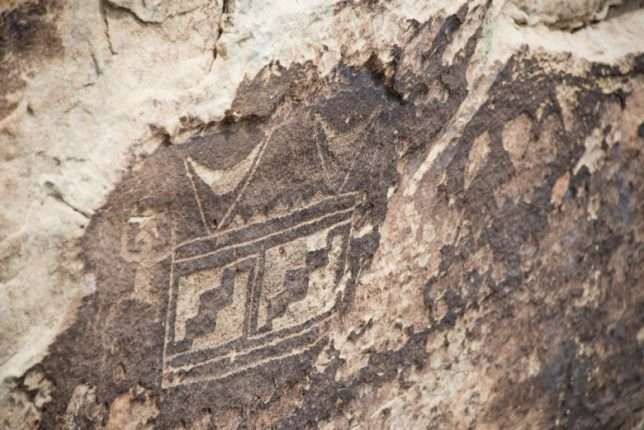 The painted desert was enough to make us understand why people liked this place, but then we stopped at a couple of places and walked among the petrified trees.  Pictures will do them a little bit of justice, but this place is just filthy with them.  In some places, trails meandered through fields of trees, some in sections, some near whole.

The colors found in the trees were simply amazing and all the work of different minerals entering in the quartz as the tree petrified.  They figure that a huge mud slide of wash covered all of these trees and then time went to work. 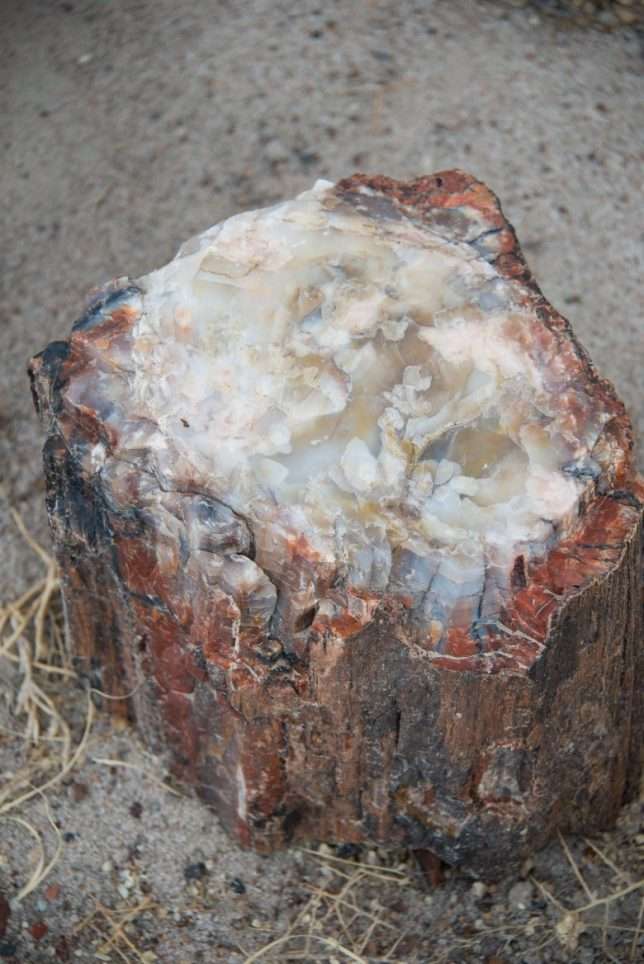 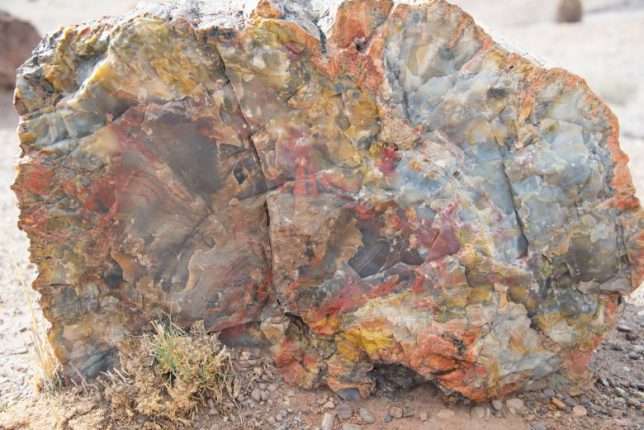 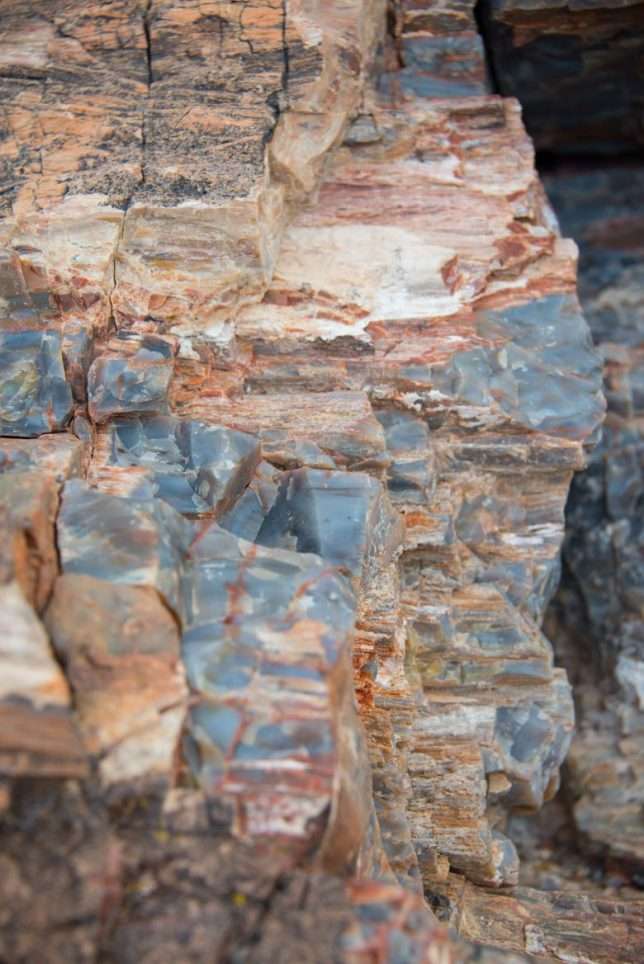 Wandering through these trees was one of the coolest things, especially when we stumbled upon (thankfully not on, that would hurt a lot) whole trees that would have stood 20 or 30 feet high, only to see them broken into sections as gravity slowly dragged sections down. 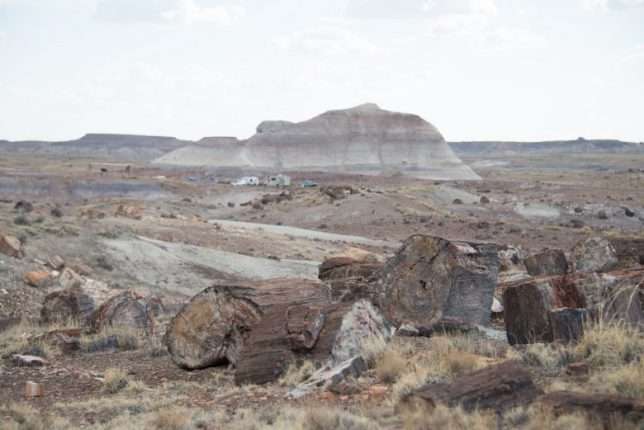 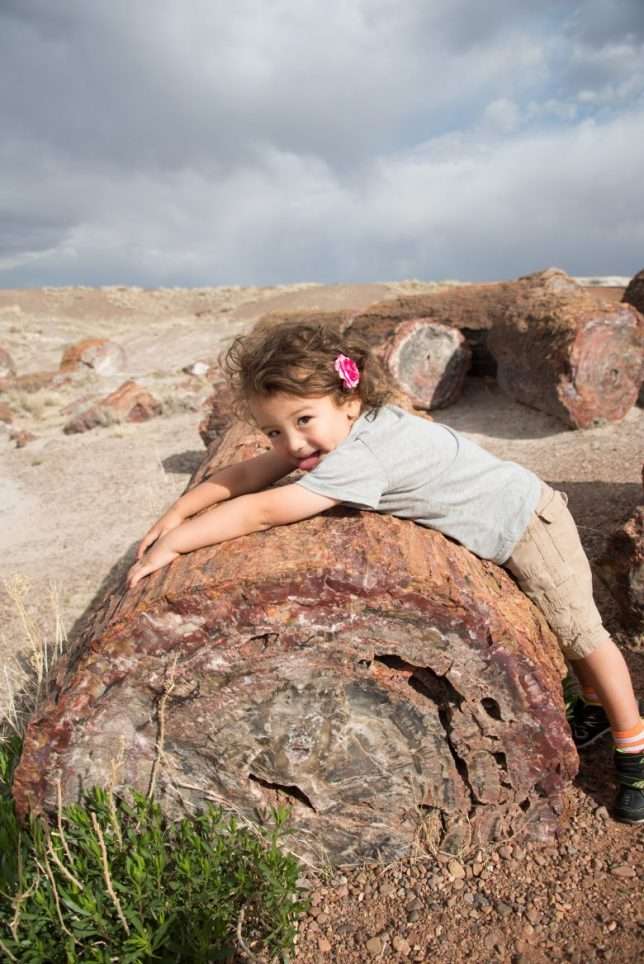 We know that people lived here and they had tons of gorgeous stone lying around.  The open plains means that winds blow fierce, so what else to do but build a house?

Constructed in the 1200s or so, it’s a small but fantastic structure that had to be plastered on the inside unless the owners like knicks and scratches.  You can’t go in, of course, but you can walk around and admire this cool little building. 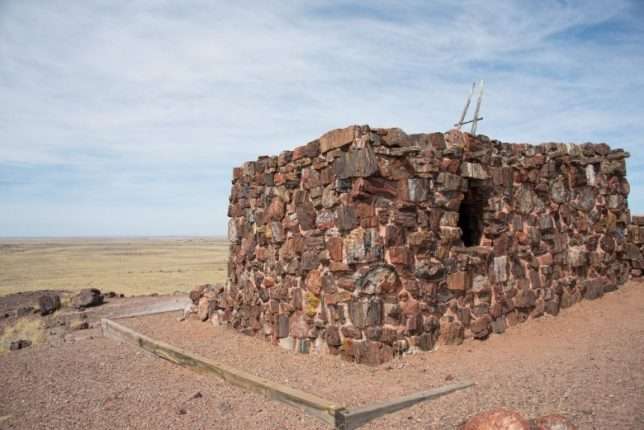 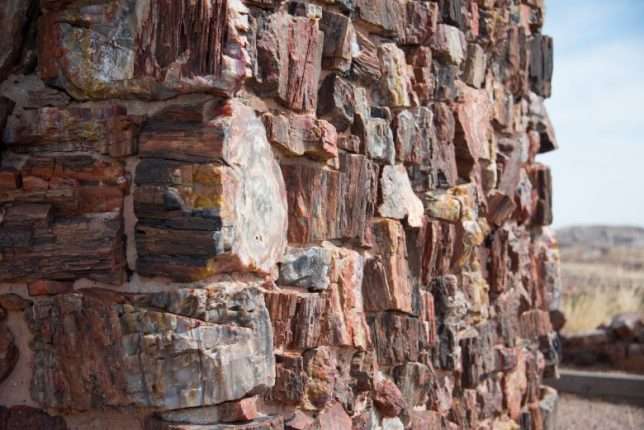 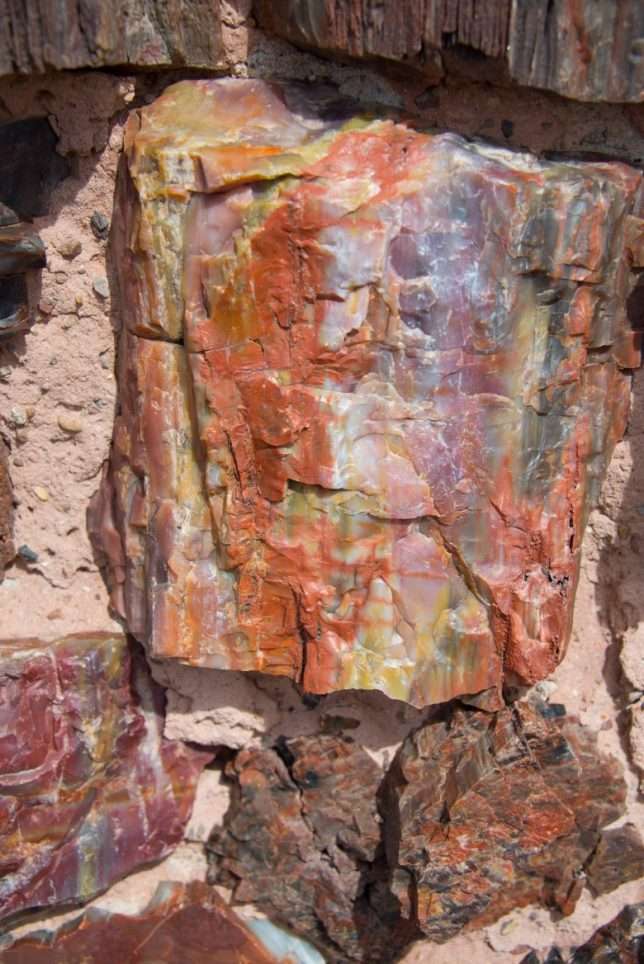 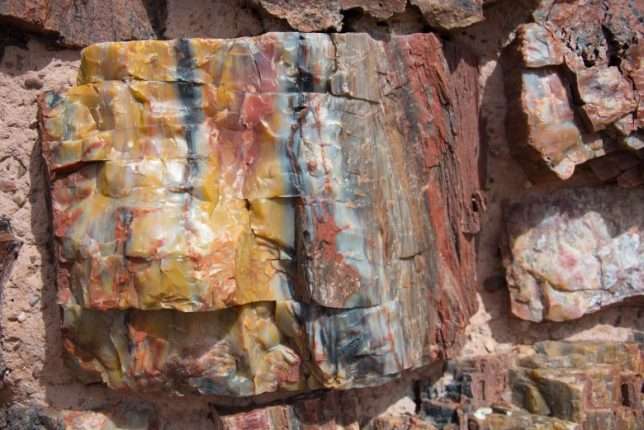 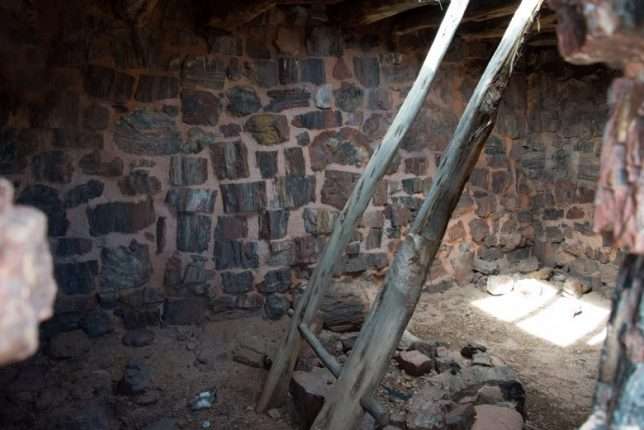 The most memorable hike for us, however, was the Blue Mesa.  It’s a short hike down to a loop trial hugging hills of various colors that felt like walking on an alien planet.  The painted desert peaked our interest: Blue Mesa solidified it.  Walking among the multi-colored stratas and seeing how time deposited them was stunned us and it was all topped of by the petrified trees scattered on the ground as we walked. 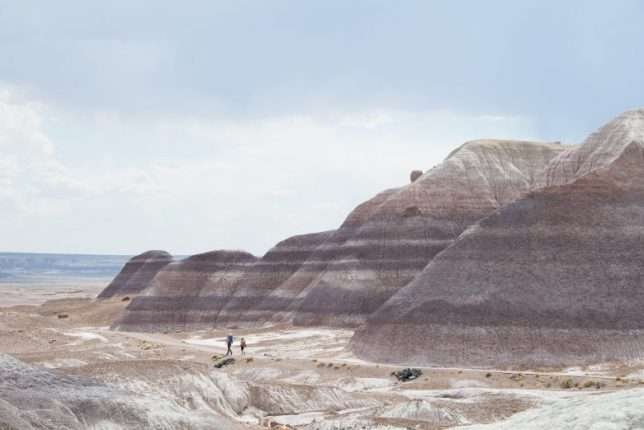 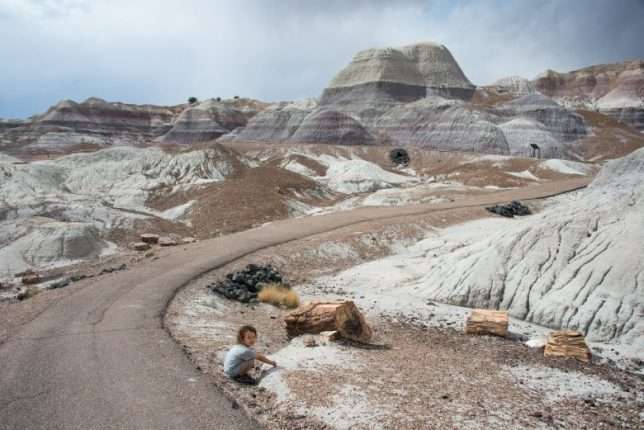 We exited the Southern gate, where self-contained campers (cars with toilets, essentially) can camp in the parking lots of the gift shops outside the park.  It’s quite a drive to the closest city and we wanted some time to process the mind-blowing stuff we had just seen.