One thing that both Shiz and I have always wanted to do was participate in a lantern festival, where scores of lanterns are released into the night air.  There are places in Thailand and Vietnam that do this and the timing of our trip to Taiwan fortuitously coincided with the Tainwanese lantern festival.  The festival at Pingxi arguably receives the most attention, but cities throughout Taiwan hold local versions to celebrate the end of the Chinese New Year.  As we were in Taiwan, we had to see one and chose Pingxi because it’s view of a night sky filled with slowly fading lights is well-known.

Pingxi rests 23 km away from Taiwan and while it is normally only services by long-distance bus, on the day of the festival buses run from the Taipei Zoo Station to Pingxi for 50 NT per person, starting at 9:00 and running frequently until 19:00.  For the return trip, free buses run from 9:50-23:00. 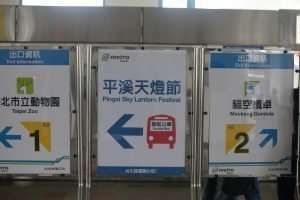 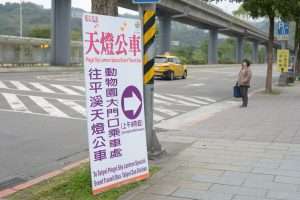 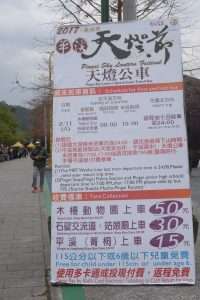 Since we were making the trip with a one-year old, we decided to make a day of the trip and take a bus from 10AM.  You can either wait in line for a seat on the bus or queue in the shorter line for a standing spot on the bus.  At 10 AM our choices were to stand in line for 1-1.5 hours and sit for the trip or stand for the entire ride and catch a bus immediately.  The bus ride takes about an hour, so we figured that if we’re going to stand for an hour either way, we might as well be moving.  Onto the next bus we hopped.  One hour of winding, hilly roads later and we arrived at Shifeng, the city next to Pingxi that confusingly holds the Pingxi Lantern Festival. 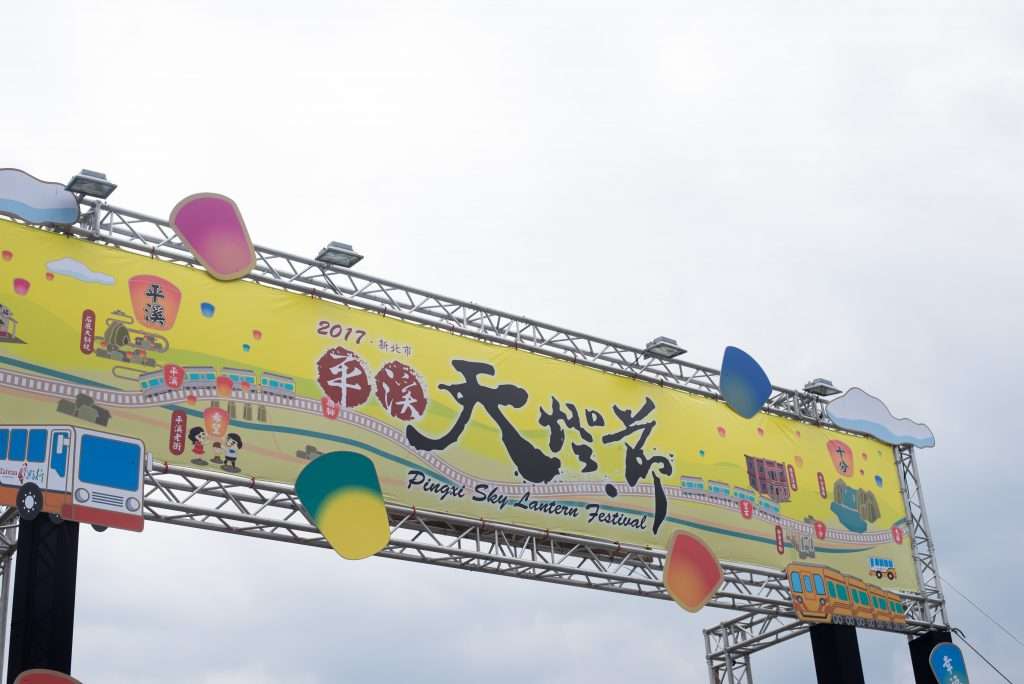 Though the main event doesn’t kick off until after sunset, activities start bright and early.  By the time we arrived, food stalls were in full gear, people were releasing lanterns, and the streets were filled with people.  There’s plenty to see and do for a full day, especially factoring in nap time for Fin.  We walked, we ate, we watched people write wishes on paper lanterns before sending them up to the heavens. 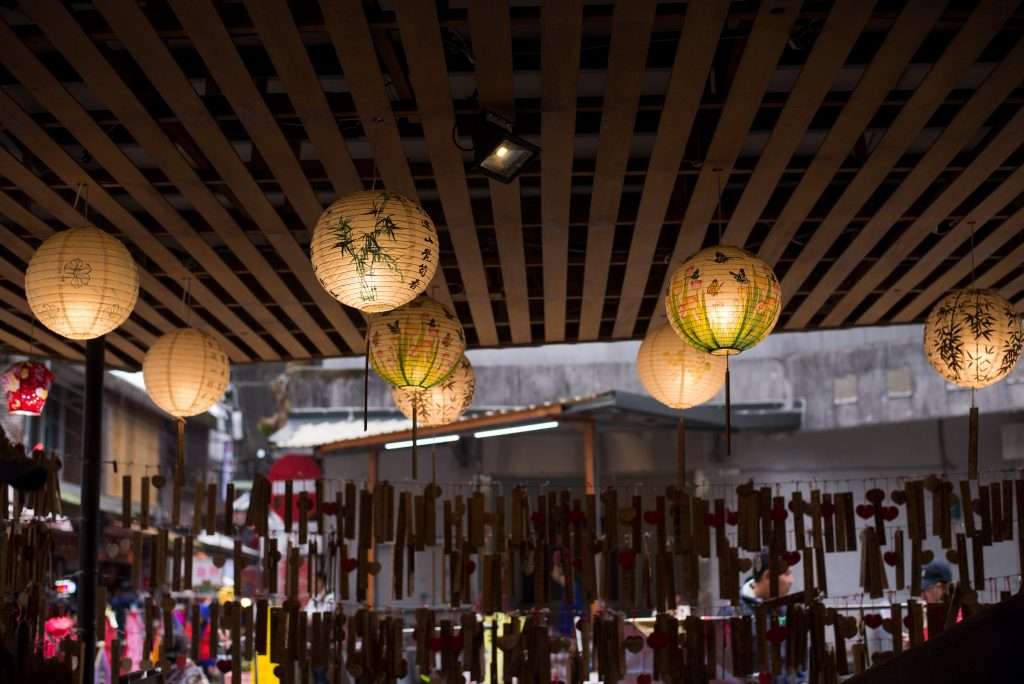 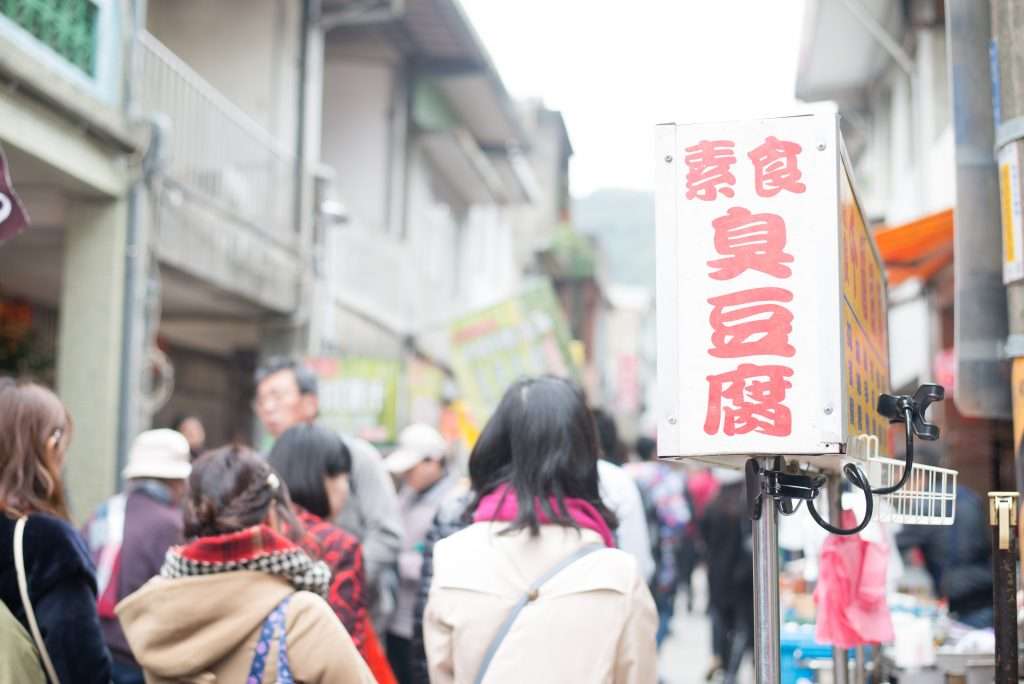 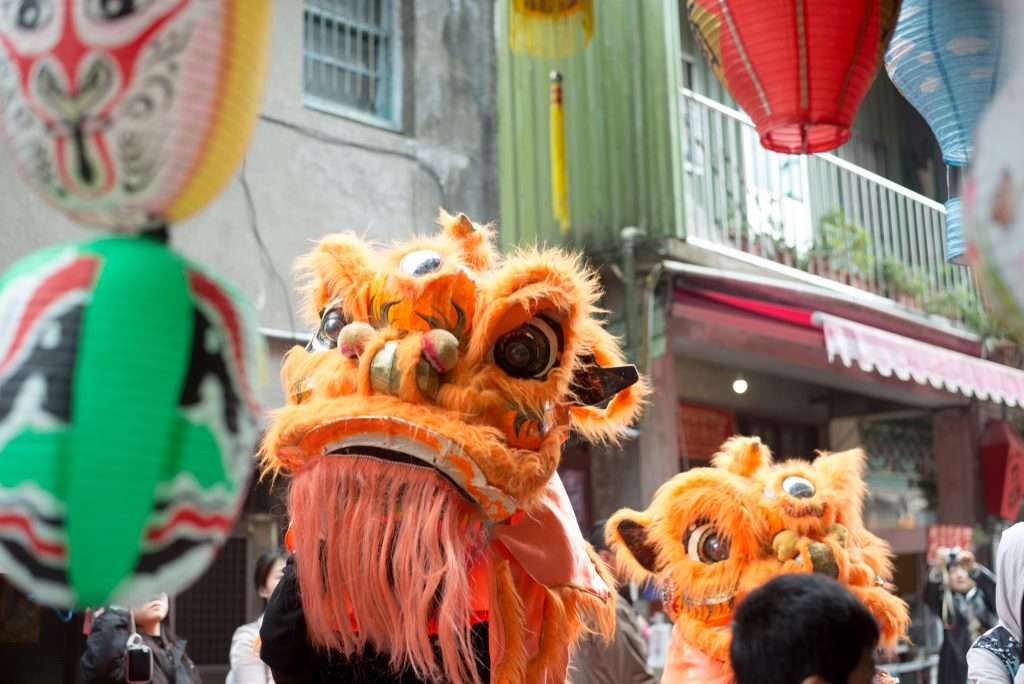 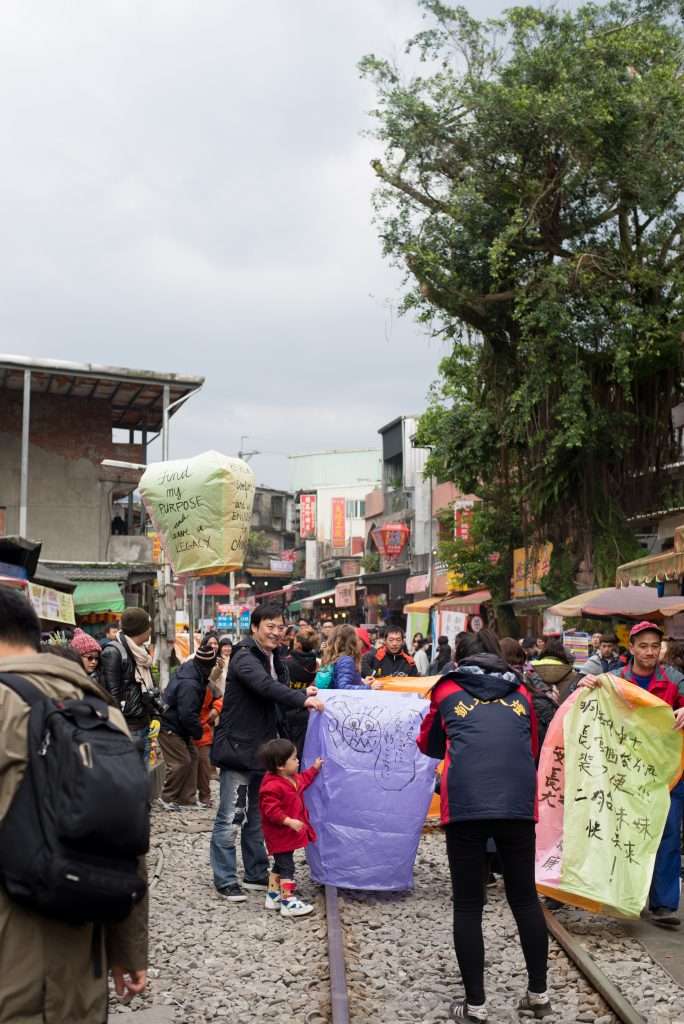 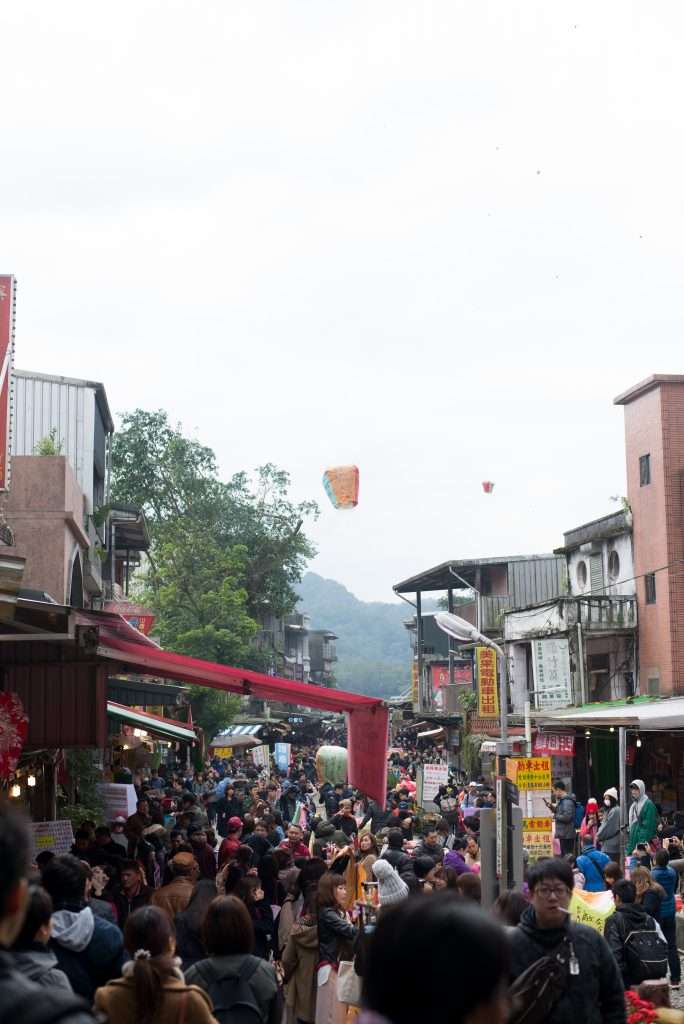 Lanterns come in several colors, each with their own meaning:

yellow = success in school or work

blue = hope that something comes true

People launch lanterns throughout the day, creating a river of fading dots in the sky.  Almost all of them launch from the train tracks, so the only pause in launching came when the train pulled into town or left.  The train tracks host the informal releases, with the main event hosted in the parking lot of the Tourism Center on the northeast corner of town.  It features 1,200 lanterns total, released in 8 waves of 150 each.  To join one of these launches you have to get at ticket on a first-come, first-served basis in the morning and they are taken as quickly as you imagine.  A very tight space around the parking lot handles the mass of observers, who overflow onto the bridge as well. 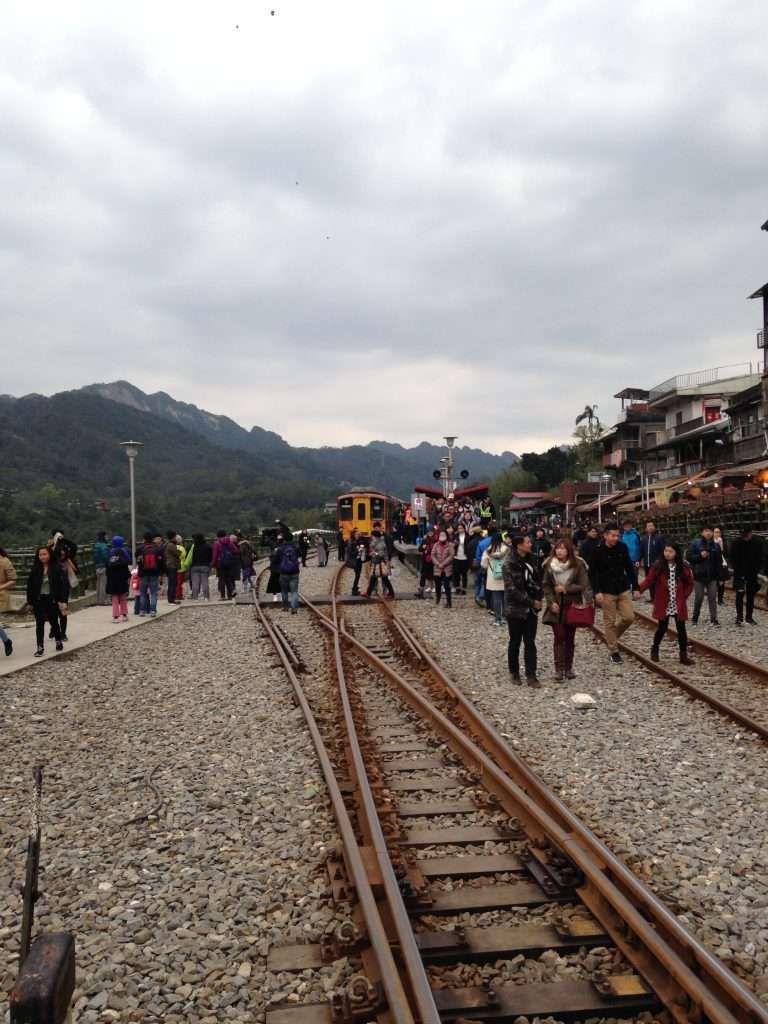 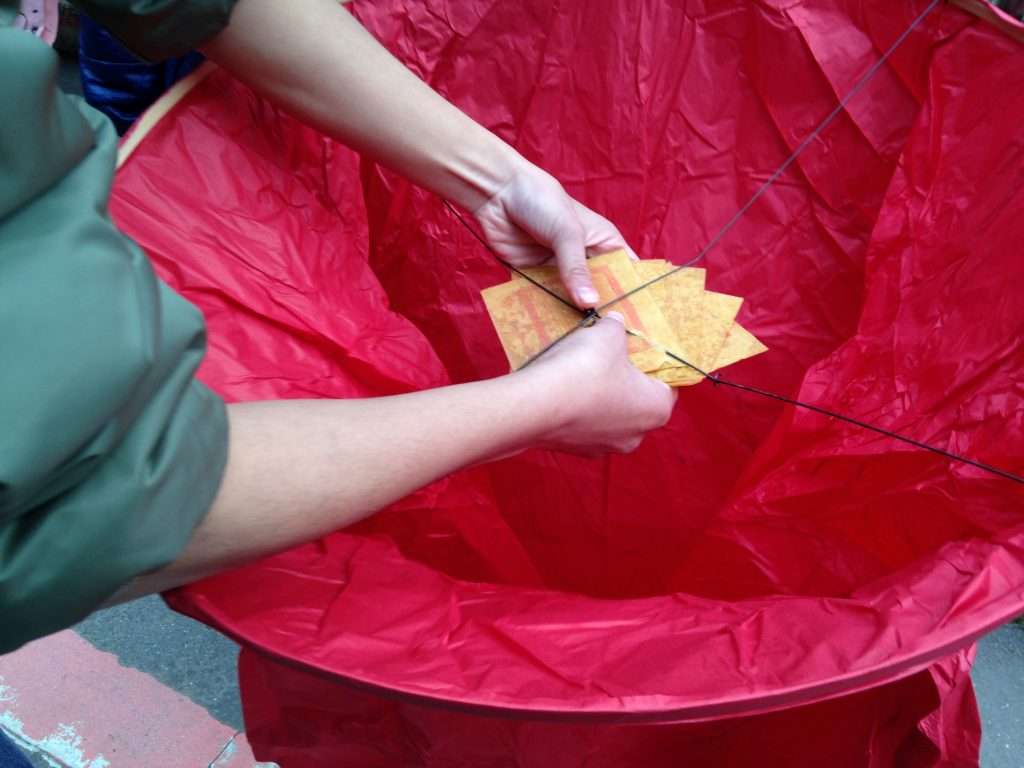 While you wait for dusk, the Tourism Center also acts as the starting point for the Shifen Waterfall.  This very famous waterfall is a short walk over a recently-created walkway and bridge.  A really neat, smaller fall feeds the river where the footbridge crosses the river and the main fall is very beautiful, a amalgamation of criss-crossing avenues weaving together a curtain of water. 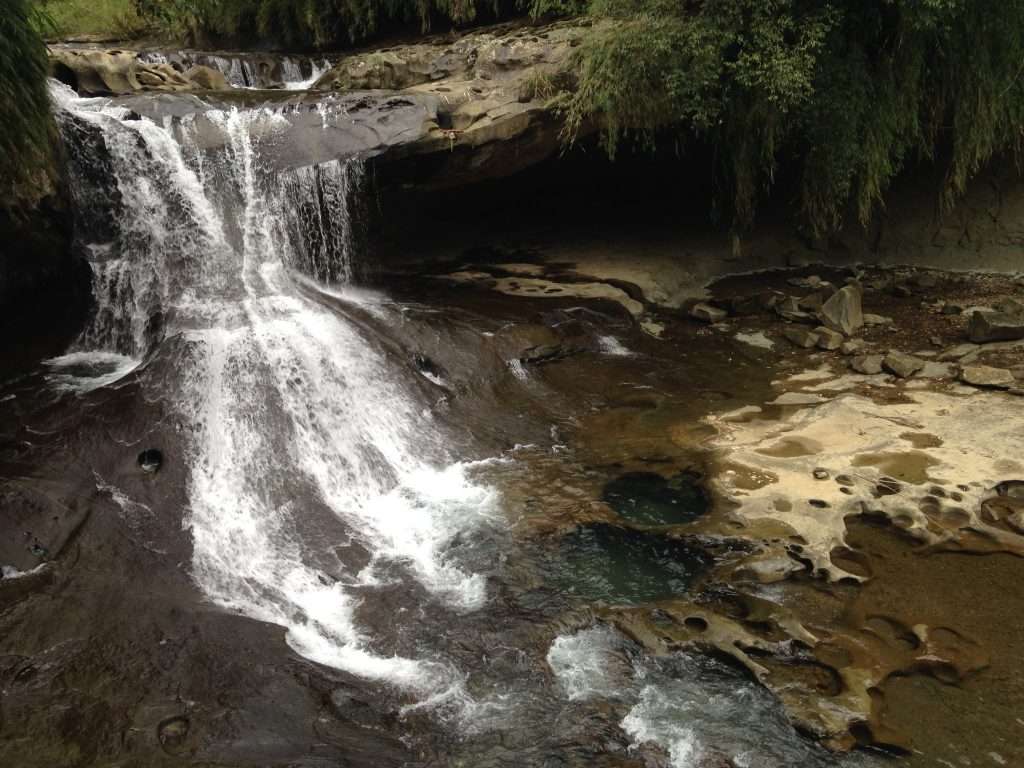 A smaller fall on the way to Shifen Falls 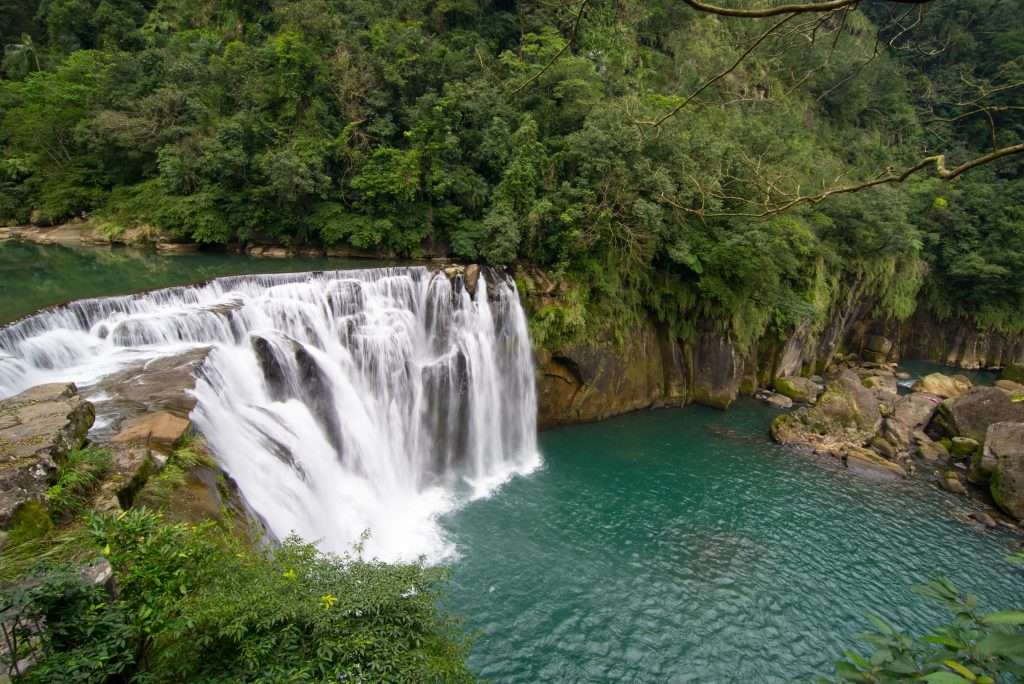 The approach to Shifen Falls 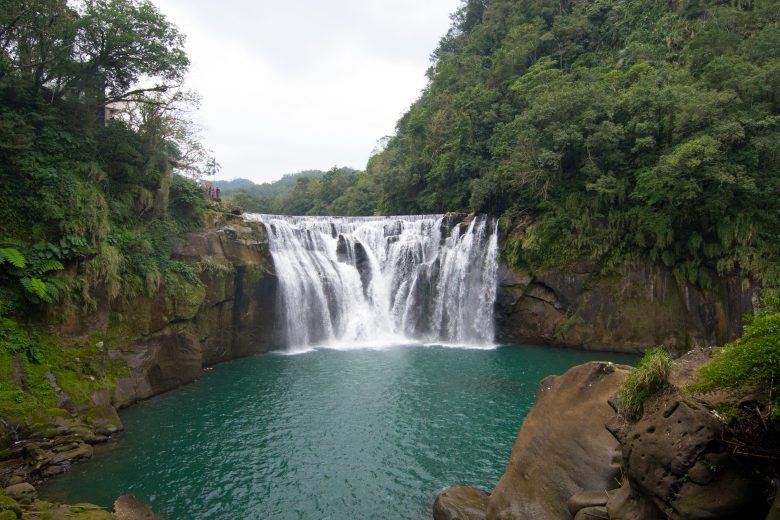 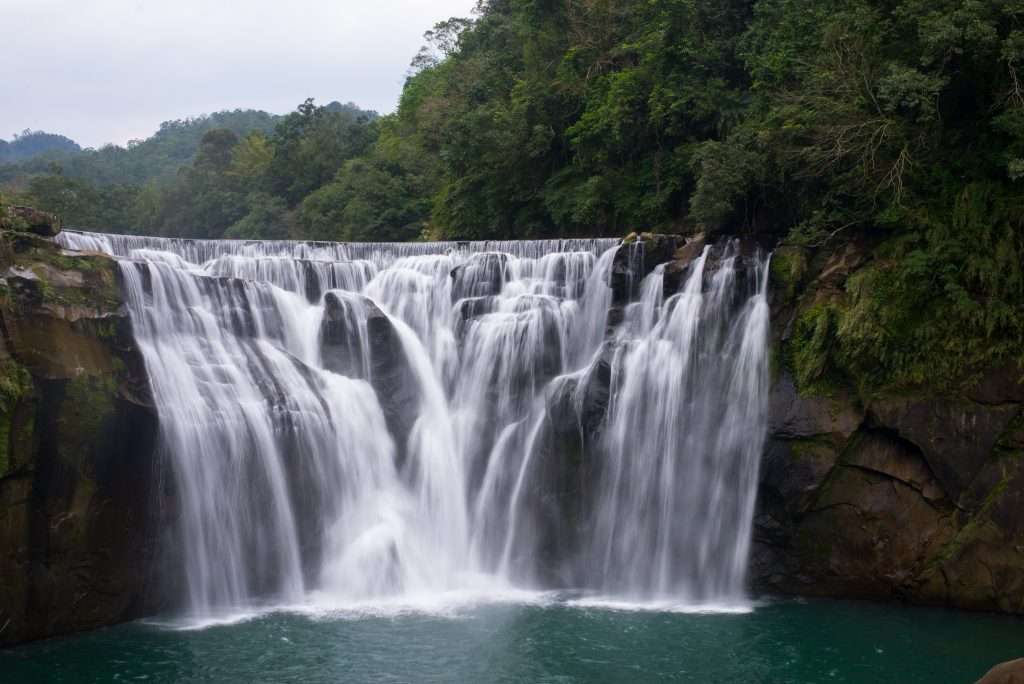 We ate our fill, strolled around the falls, and released a lantern, but still found ourselves with two hours until the first wave of lanterns.  We warmed ourselves with some tea served by the local elementary school, then walked the school grounds and met some very friendly people.  With another hour left before the launch, we stopped by a cafe to kill time and relax before all the activity.  Filled with food and a hot drink, we were ready to go.

As one of the largest lantern festivals in Taipei, people visit Pingxi from around the world (we heard more Japanese than Chinese) and the streets leading up to the main stage were packed.  There is just one road into the parking lot of the Tourism Center that acted as the entrance and exit, so congesting was horrible and movement slow.  We stopped to watch some people release lanterns before crossing the bridge and heading into the fray. 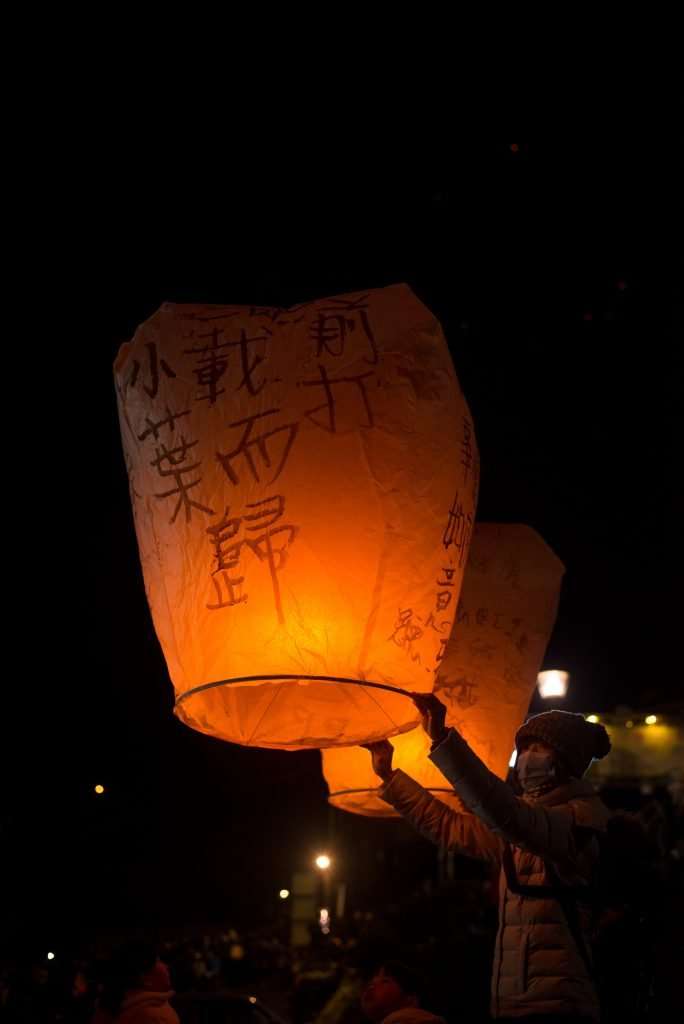 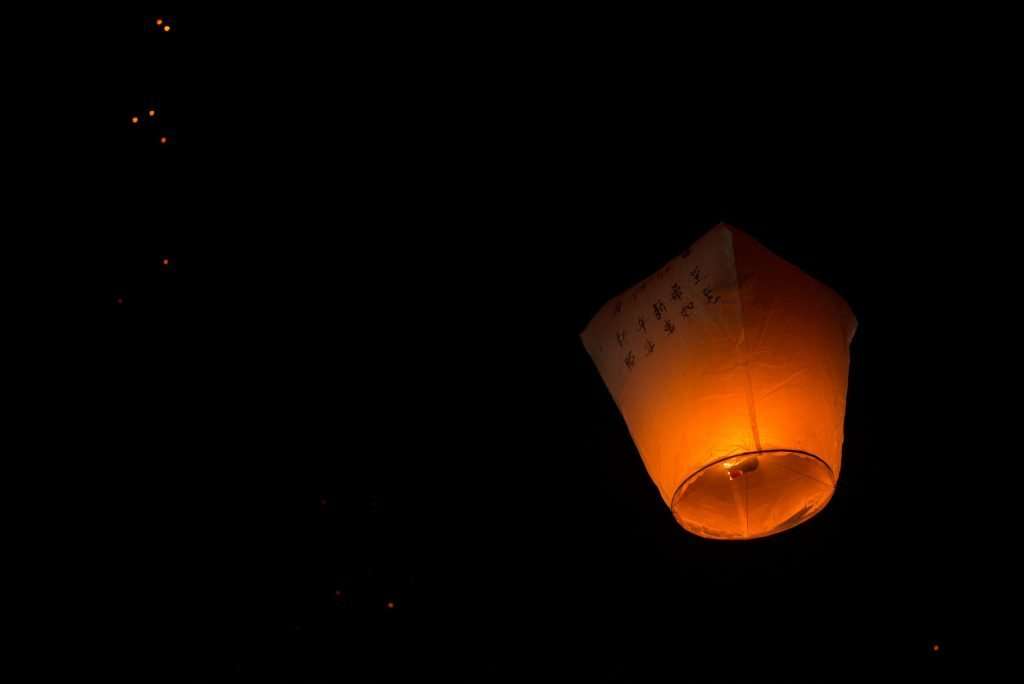 Once in the herd, we had two things to protect: Shiz’s camera and Fin (list not in order).  That sleepy boy was strapped to my back, so Shiz stayed behind me to guard against any rushes.  Rushes happened immediately after every release as the viewing space cleared in the parking lot, so thankfully there were only a couple of moments that caused concern.  Since it was waaaaay past his bedtime, Fin fell asleep though, with his neck angled 90 degrees to the sky, a position that always makes me fear for his neck.  Everyone was congenial and patient while they waited, but we did get a couple disapproving looks.  The best, however, was this comment that Shiz overheard: “That kids is really cute, but isn’t that a little dangerous?” 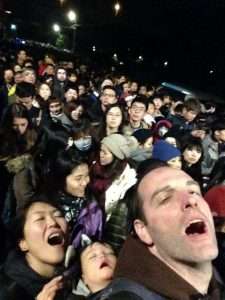 Living on the edge

Eventually, we found ourselves 6 rows away from the action and saw a beautiful trove of lanterns ascend.  There was so much happening and so much to take in, however, that I find myself liking it better as photos and videos than during the real-time viewing.  I’m glad that we got close to see a launch from above, but if we ever find ourselves there I think we’ll just stay near the train tracks or on the bridge. 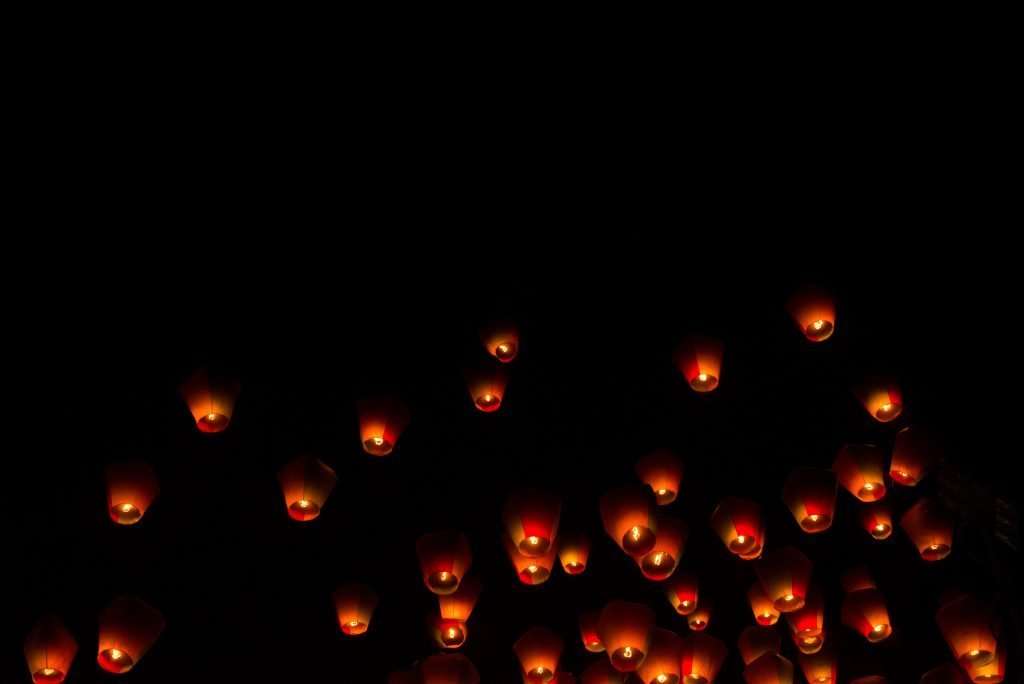 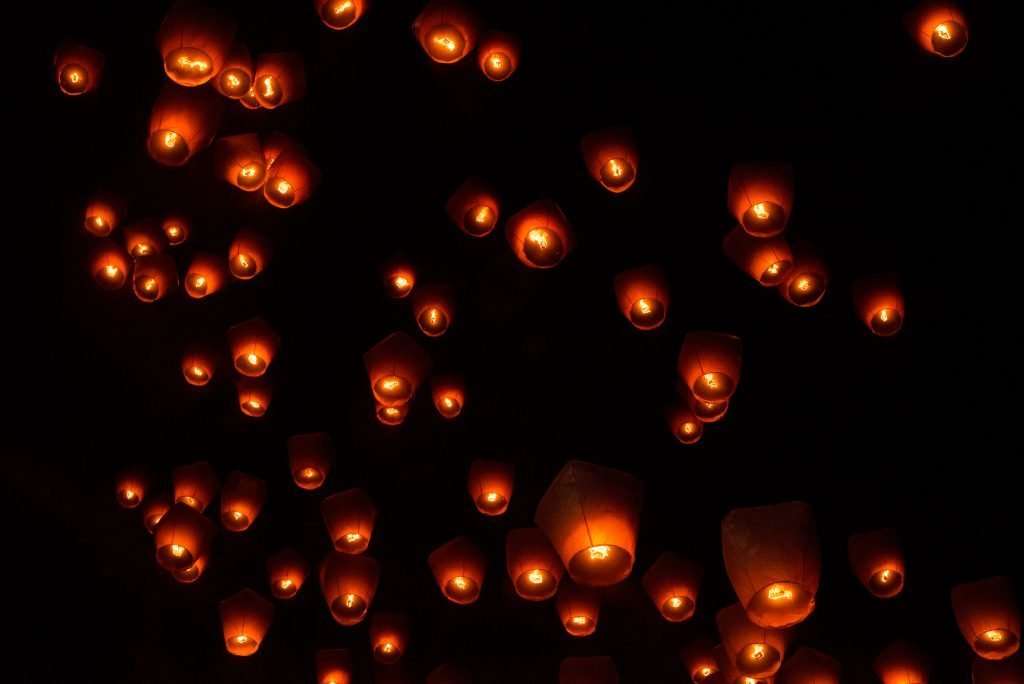 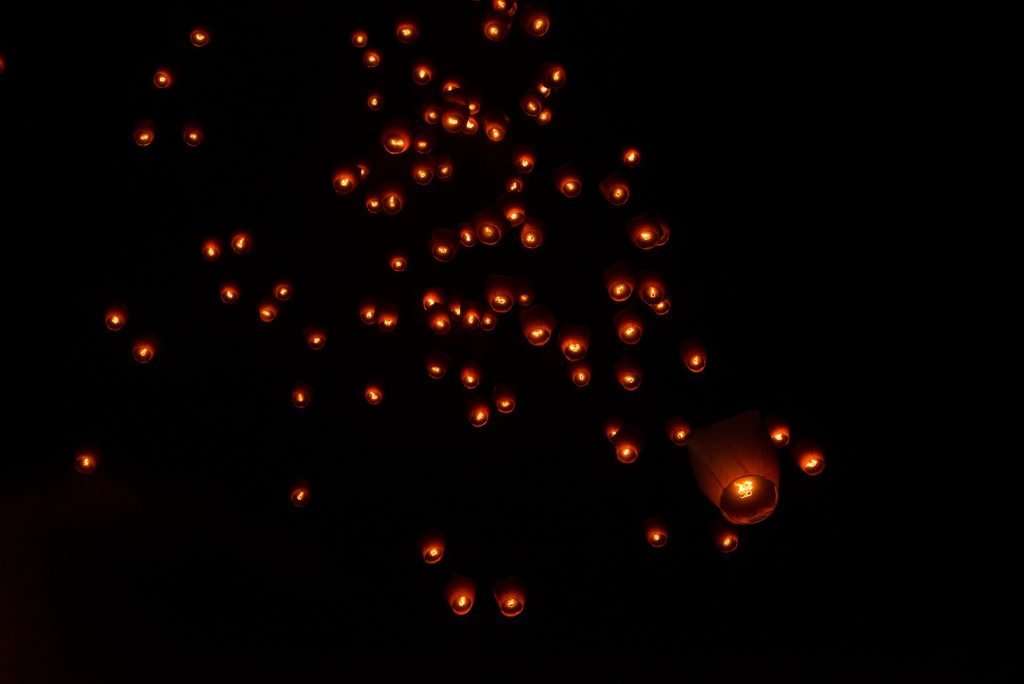 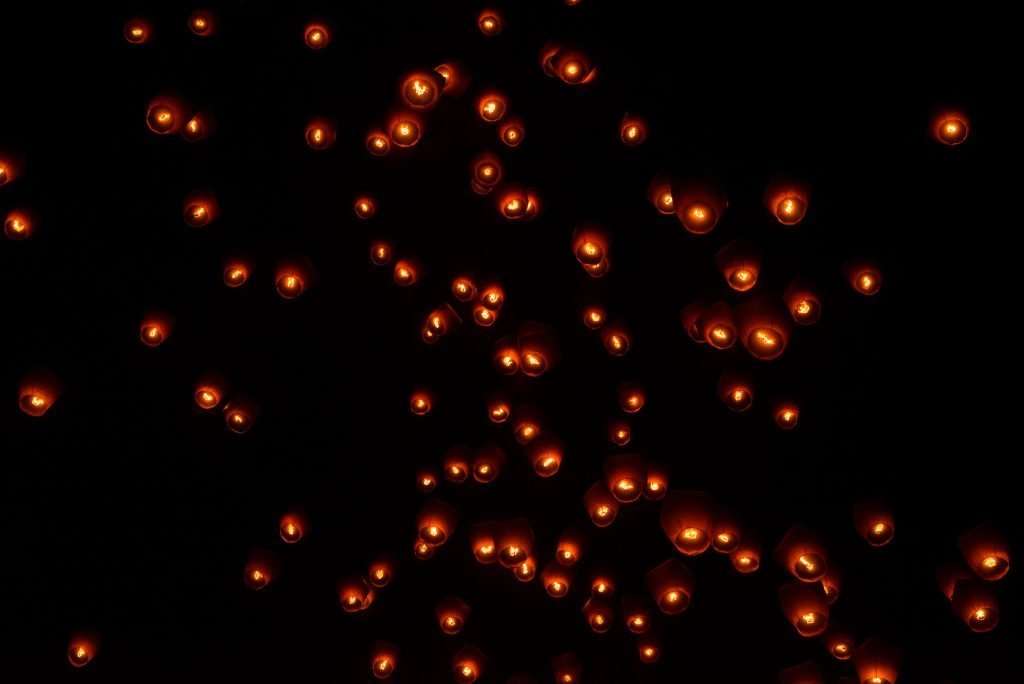 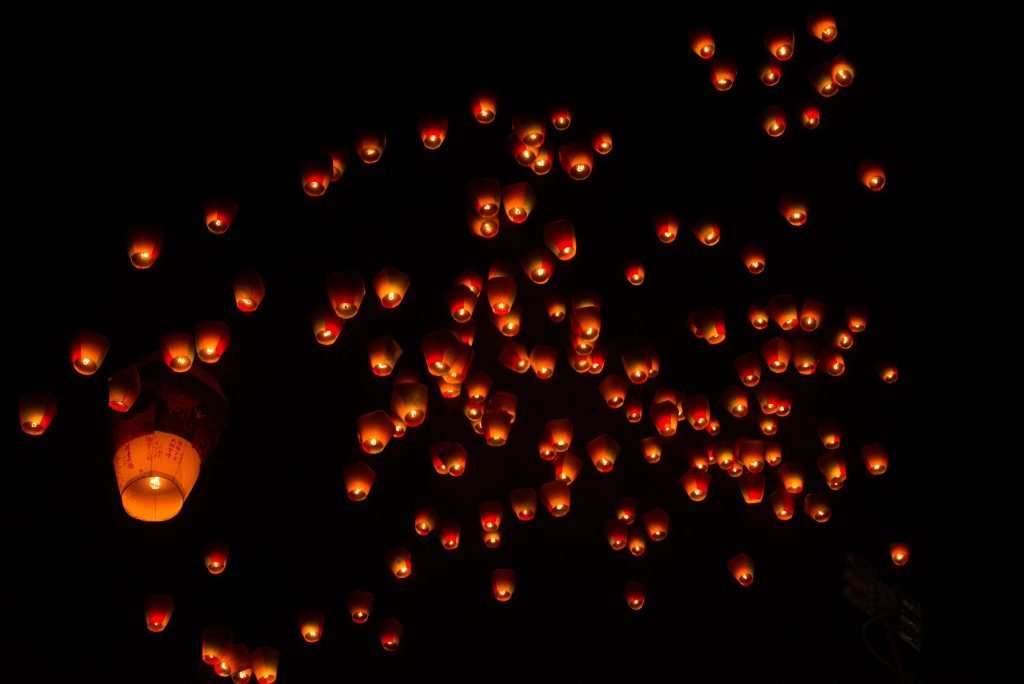 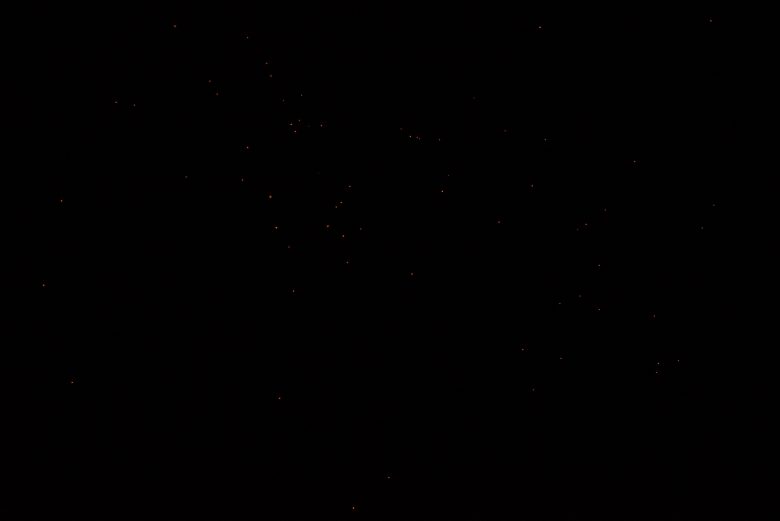 A constellation of lanterns

The day went very well and we lined up with our exhausted little baby.  Once in line and we stopped moving, though, Fin understandable frustration came to a head.  He still can’t talk, but I imagine he was trying to say something along the lines of: “What the fuck are you doing!!!???!!  I should be in bed!!!!!”  I held him, soothed him, rocked him, and did everything in my power to keep him relaxed.  This kid is just awesome, though, so he went back to sleep for most of the ride with very little crying (apologies to everyone in the bus). 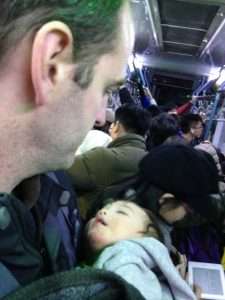 We arrived, beat and happy, back at our home, put Fin to bed, ran down to the night market for dinner, and did a whole lot of not walking for the rest of the evening.