As one of the US’ oldest and most storied national parks, Acadia most certainly merited a visit.  Add to that the claim of being the first place in the US to receive sunlight (during winter) and we pretty much were forced to go there.  Researching while we went, we also discovered the extent to which the John D. Rockefeller transformed that park, with carriage-roads, bridges, and an insistence on a certain type of class.  It’s like there is nowhere in the NE US that he didn’t touch. 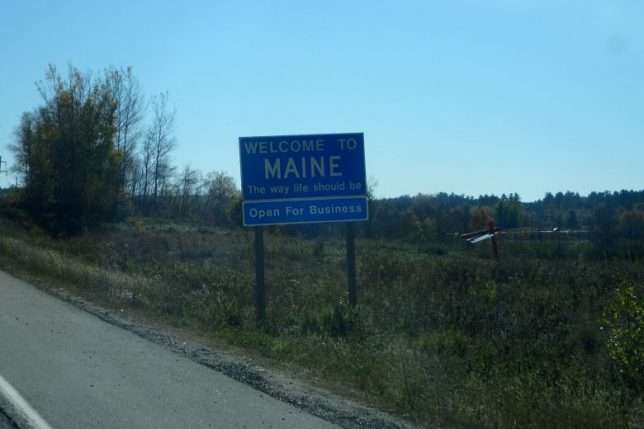 Crossing into the US, we had one stop before we headed into the park though, and that was:

It’s in Bangor, where we planned to stay the night anyways, so we had to drive by for a visit.  With Halloween fast approaching, we thought that one of the US’ most renowned horror writes might deck his house out pretty well.  The house has a Halloween touch here or there, but it turns out to be the regular decor.  Rumor has it that sometimes there is a red balloon in a window, though.

As we approached we rubber necked ourselves silly hoping to catch a glimpse of the guy, but all we saw was the back of someone’s head.  I have no way of proving or disproving whose head it was, so it’s more fun for me to believe that I saw the back of Stephen King’s head.  So this I will believe. 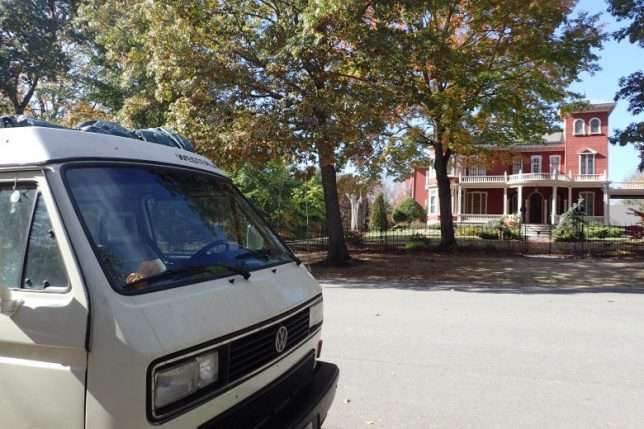 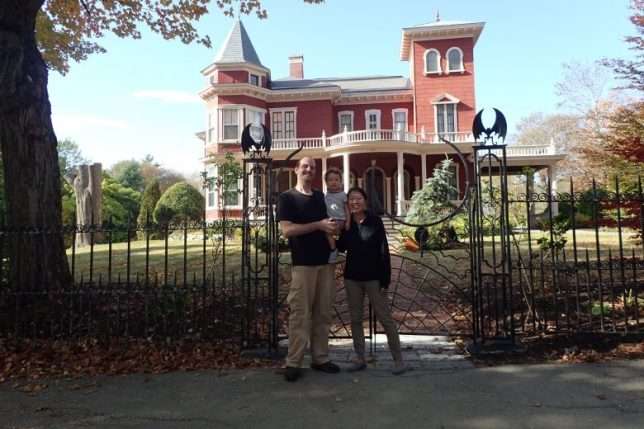 With that checked off the list, we headed over to Acadia to experience this wonderful park.

The season was well over by the time we reached here, which caused some panic among us as we saw that the campsites were full and very few private sites were open.  Undaunted but a little afraid, we headed into the park and eventually made our way to the one campground that was open this late in the year. 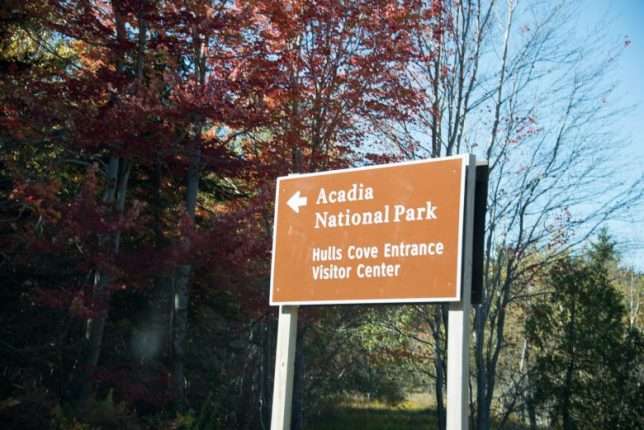 Lucky for us, though the campground was fully booked, the grounds were waiting for a project to start and the rangers were opening up sites on a day-to-day basis until the project began.  So we had one night covered at least.  The rangers also provided us with some superb tips on where to go to see sunsets and take in the park.

The two most popular activities in the park are the 43 km Park Loop drive and biking/strolling/taking a carriage ride through the 80 km of carriage roads, which are off-limits to motorized vehicles.  Traveling with an infant limited our ability to do the later, but the former proved a nice, scenic drive.  Most of the road is one-way and the signs are pretty close to the attractions, so keep an eye on where you are otherwise you’ll miss something and need to drive 243 km to see it.  This happened to us with Thunder Hole; we drove right by it and were too far down the road to park and walk back by the time we realized.  Eh, you see some you miss some.

The drive was gorgeous and even though we clearly missed peak leaf-peeping season, the trees and seas provided wonderful vistas.  We did make one stop for a short hike and this I must insist you do if you visit the park.  Maine is famous for its coastline and it must be experienced, even if for only a little while.  We stayed for 20-25 minutes, but I walked away understanding how people could fall in love with the sea here. 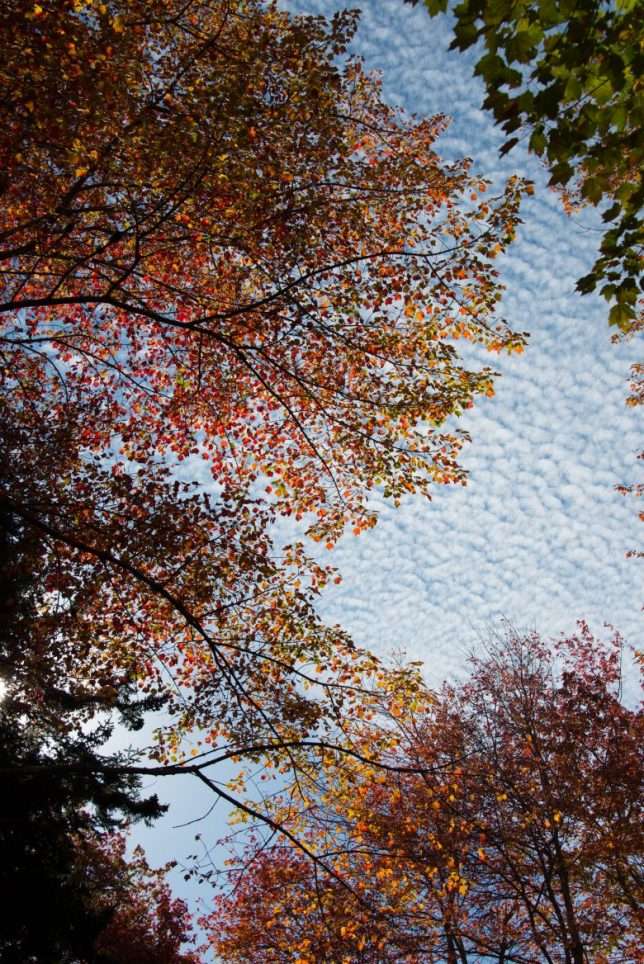 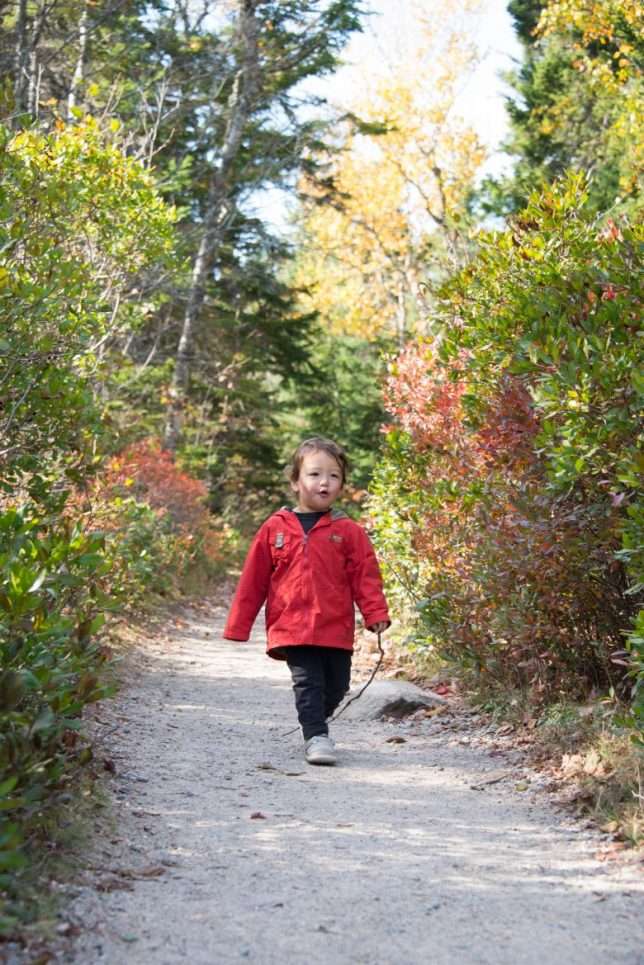 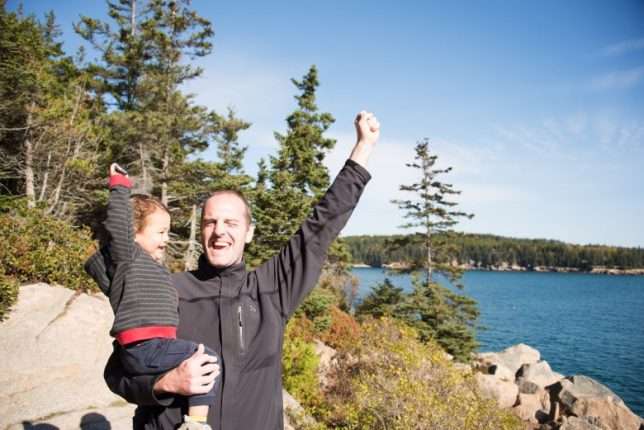 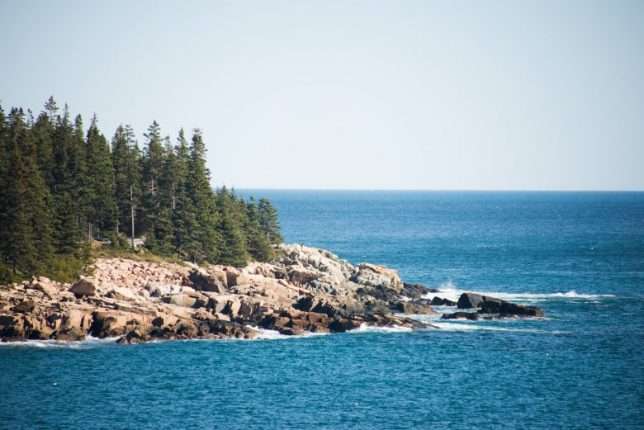 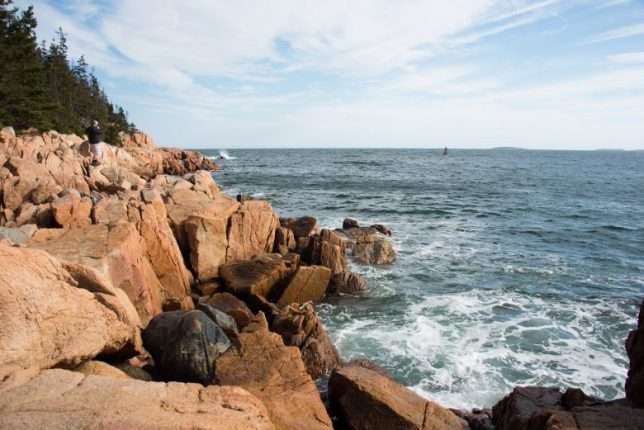 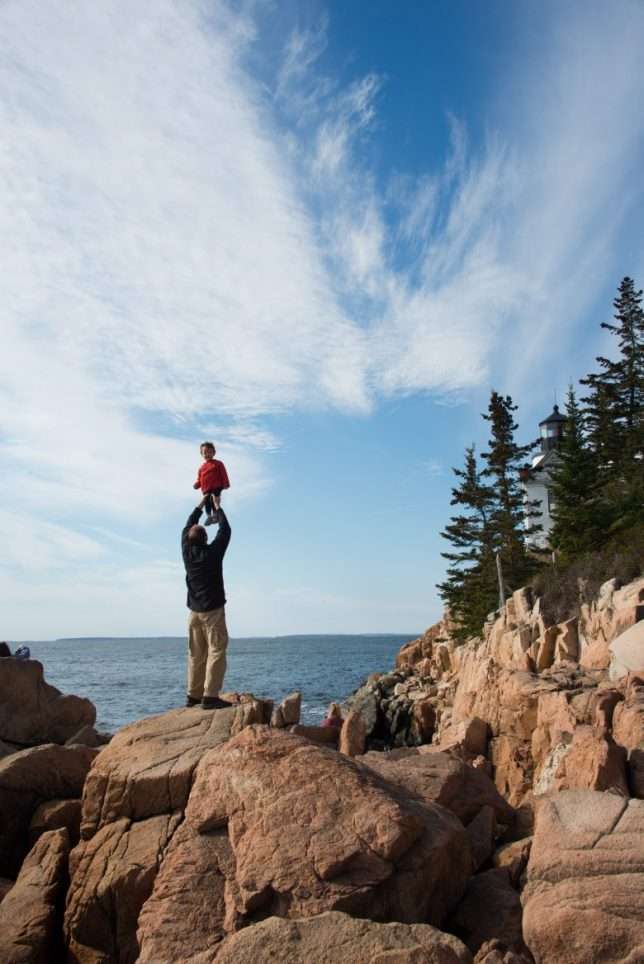 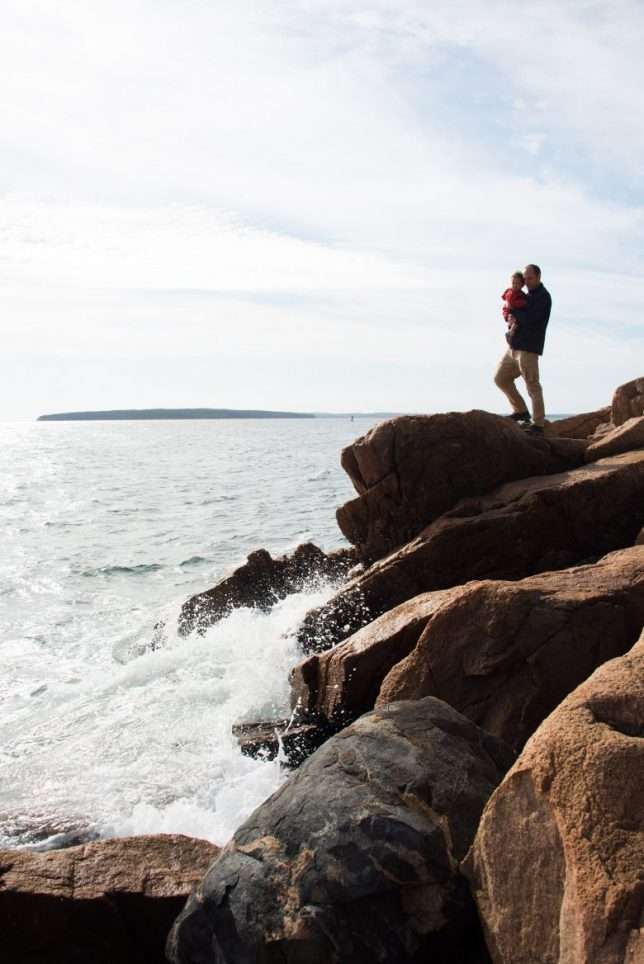 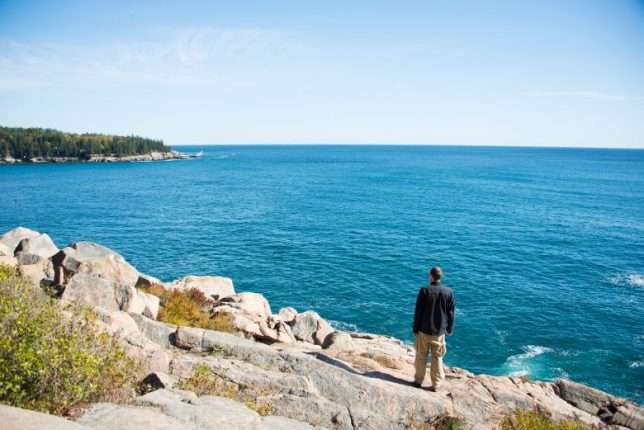 With the turn of the seasons came early sunsets and darkness now arrived before Fin’s bedtime.  We took the opportunity to watch a sunset (Fin’s first!) from Acadia’s Cadillac Peak.  The top of this peak is said the be the first place in the US for the rays of the sun to hit each morning in the winter.  In fact, every October 22nd people gather here to witness this event.

Side note: the story of why Acadia can only make this claim is pretty interesting and laid out in detail here.  Long story short, the city of Lubec and Acadia were making this claim ahead of the January 1, 200 sunrise.  They appealed to the U.S. Naval Observatory to decide, but they stayed calm until finally declaring that the sun hits Lubec’s Porcupine Mountain first in the summer and Cadillac Mountain first int he winter. Very savvy and political of them.

We did have some time to hike the mountain before the sun set and the views were jaw-dropping. 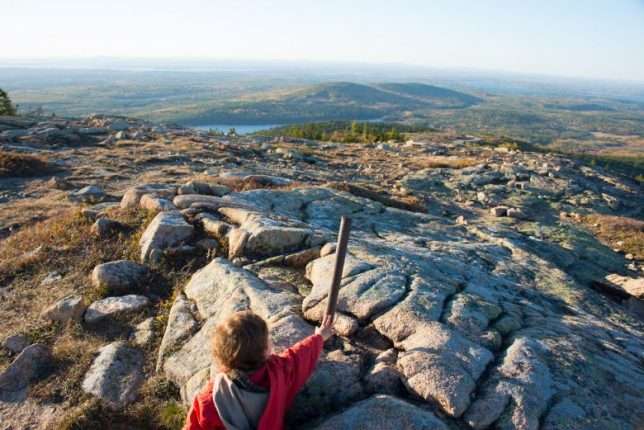 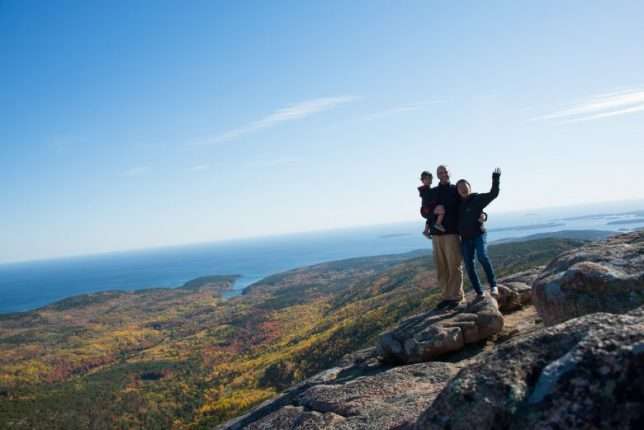 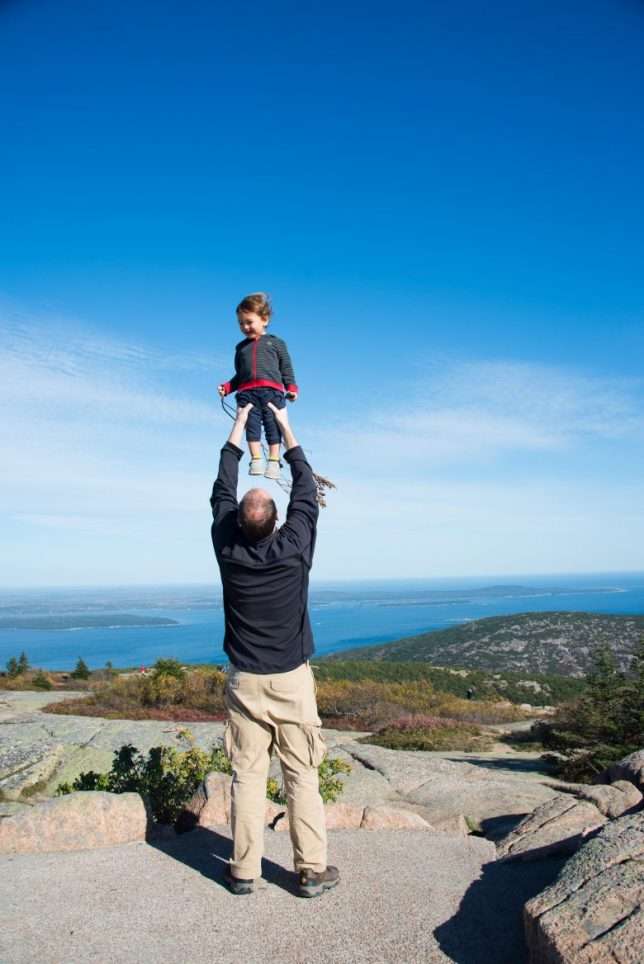 The rangers at our campsite gave us some tips on where to watch the sunset, which proved to be spot on, though there was never any doubt.  I’ll let the views speak for themselves. 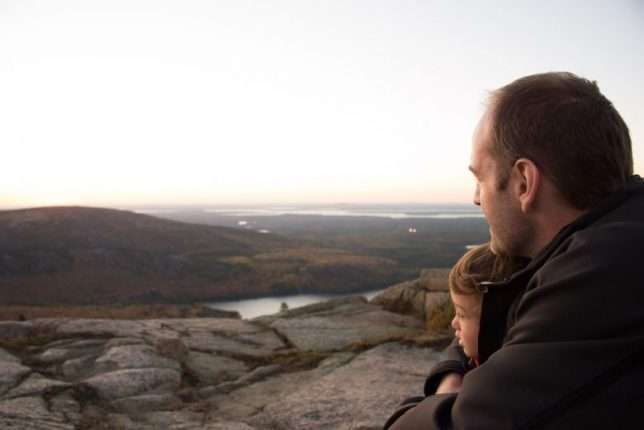 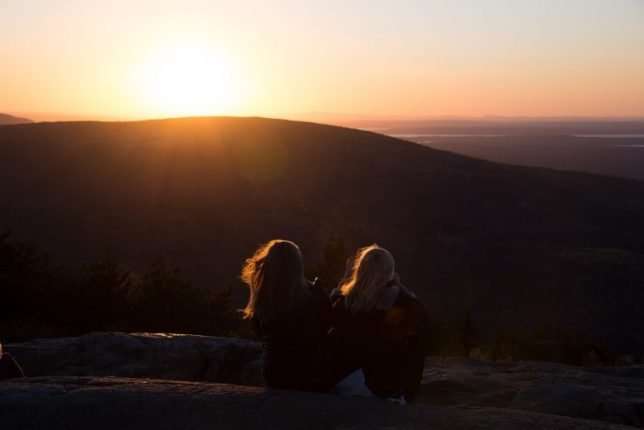 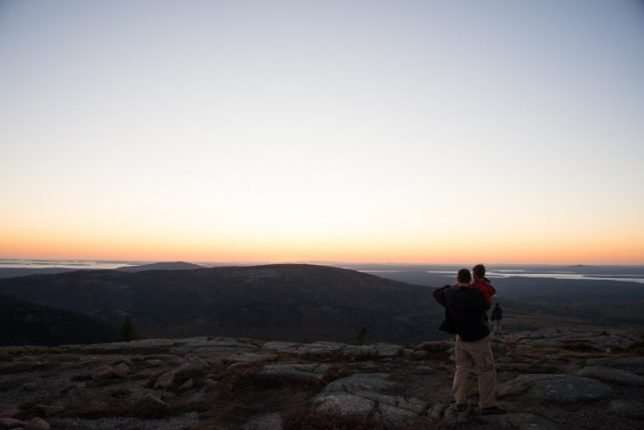 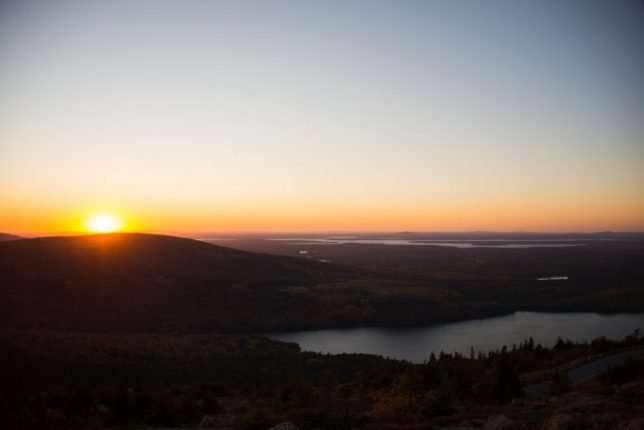 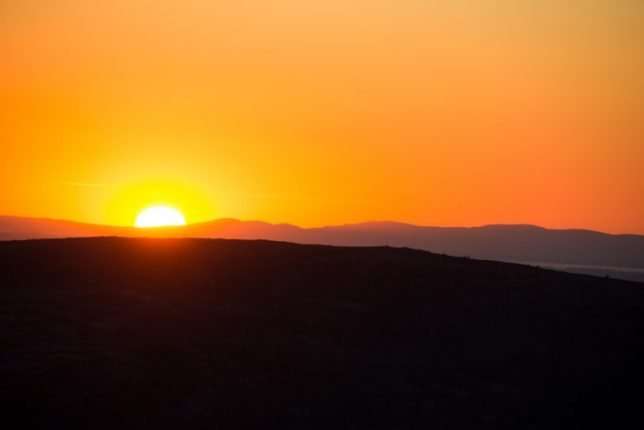 We took in our fill of Acadia over a long weekend and decided to take in a campsite halfway to the next destination, Portland, on the way.  The off-season, however, had other plans as we could not find one single place that had stayed open.  With little other option, we found a campsite that had been closed for the season, chose whatever spot we wanted, and pulled off our first ninja camp!

It was fun, though we did joke about someone knocking on our door in the middle of the night with a shotgun.  The coast was clear all night, however, and we were treated to some wonderful lakeside camping free of charge. 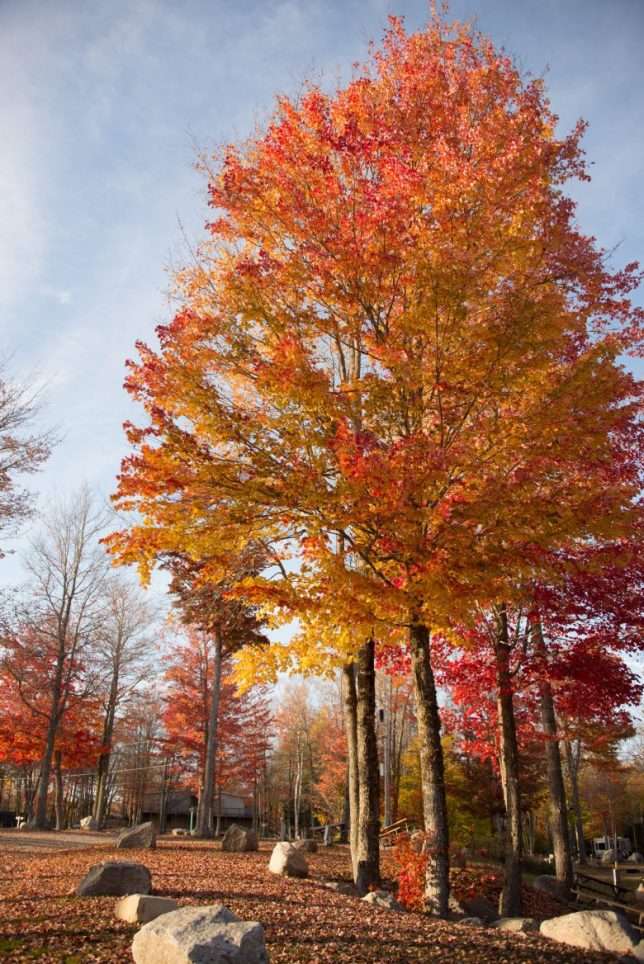 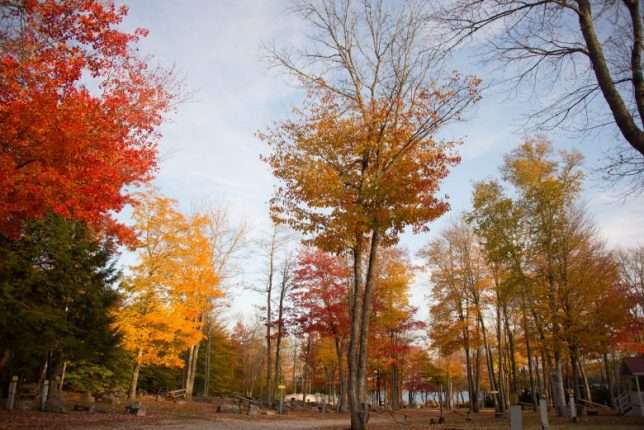 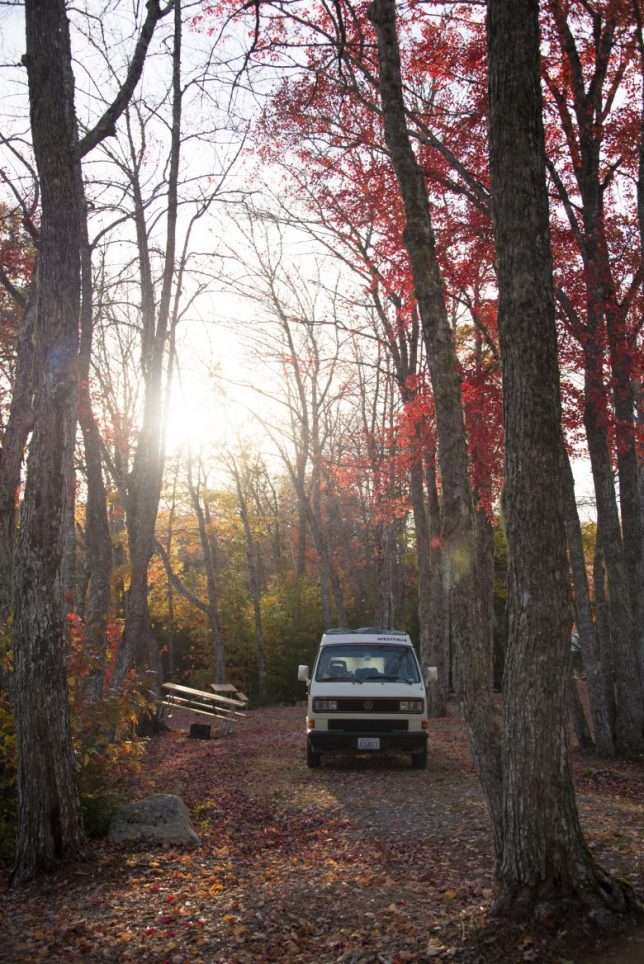 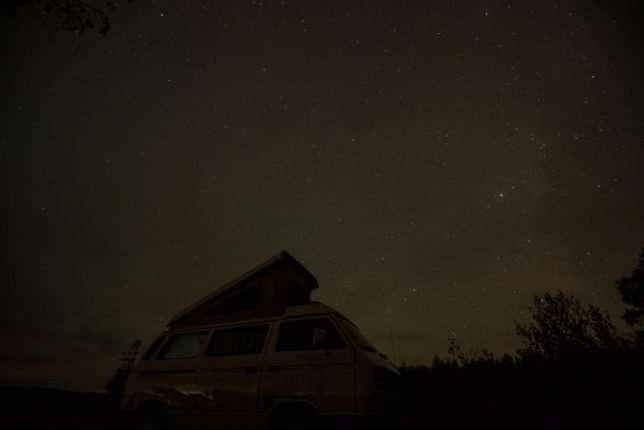 We woke up, packed as quickly as we could and set off for Portland!