There was some time over Christmas break to fix some stuff on the van and our sliding door demanded attention, because a couple of months ago one of the bolts flew out when I opened the door. 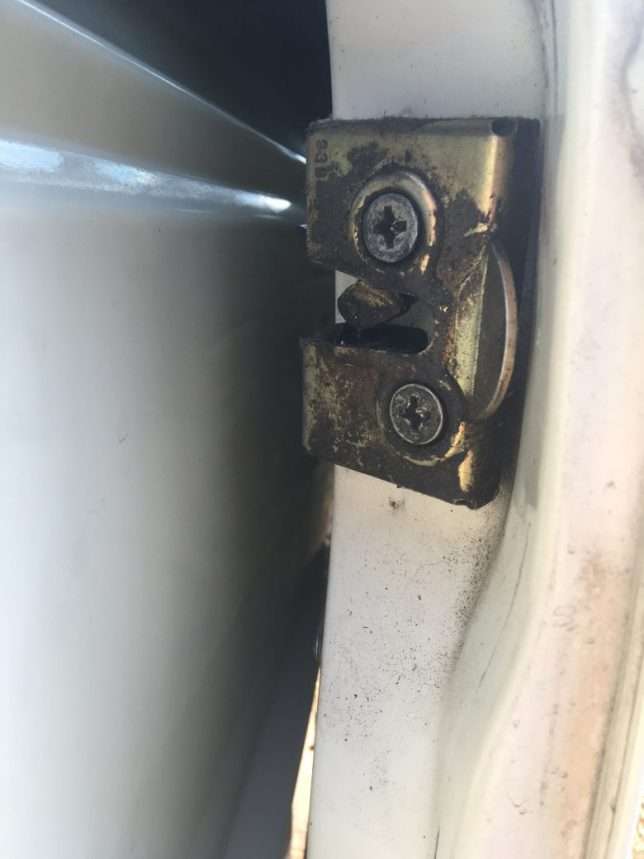 See that bolt up top?  That was not connected to anything, which normally is a problem but even more so of one when that lock holds your door shut.  For months until I had the chance to fix this I was worried that one day the door would just come flying off while driving down the freeway.  Thankfully a mechanic told us that it wouldn’t be too bad, but that we definitely should take care of it.

So, it was time to take the sliding door off and fix this thing, which would also give me a chance to refit the door and both eliminate the gap below while bringing the door flush with the rest of the van (see below). 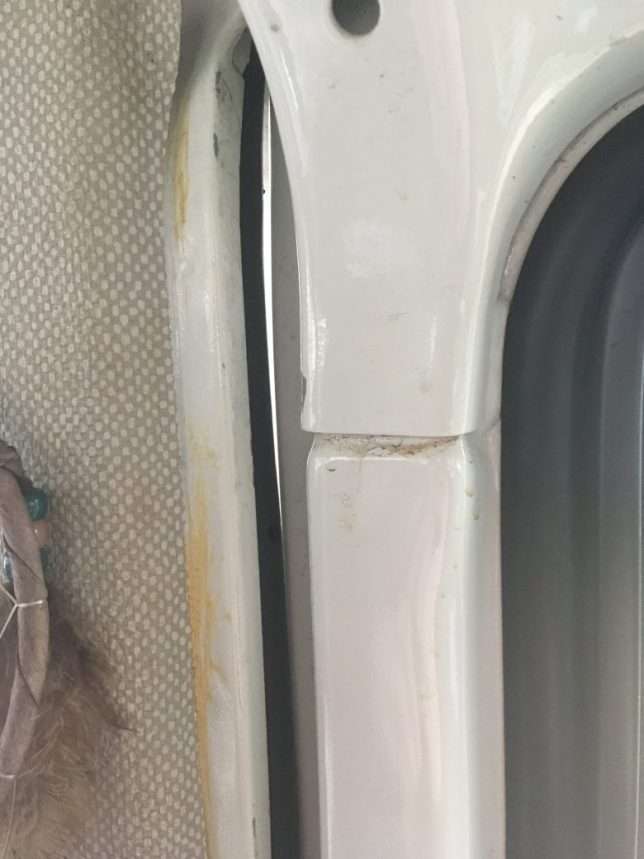 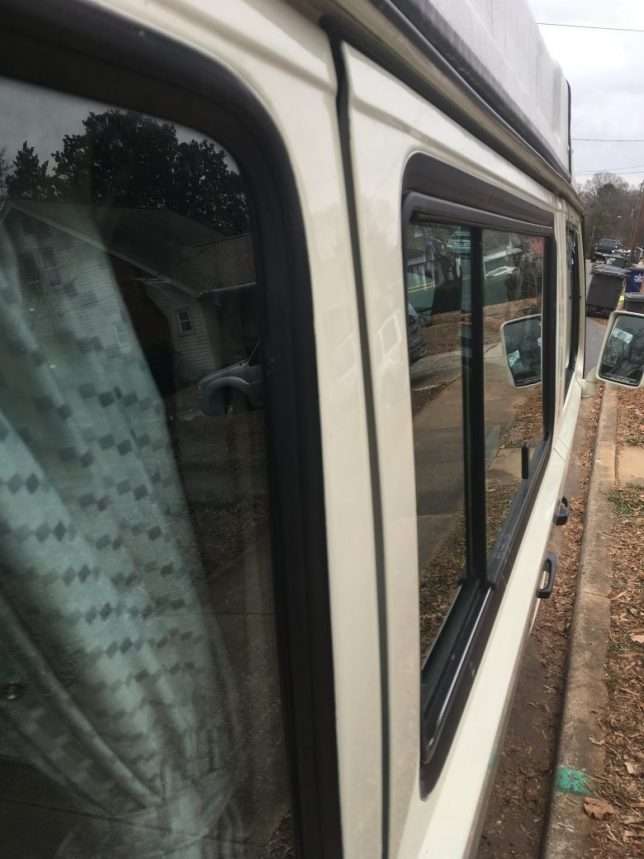 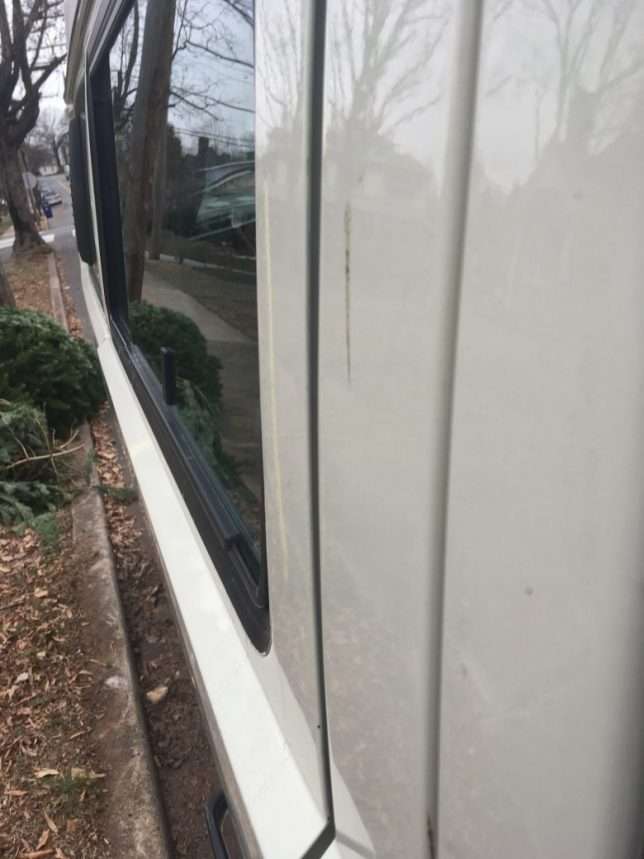 Step one involved taking the cover for the sliding rail off, which is attached by two screws. 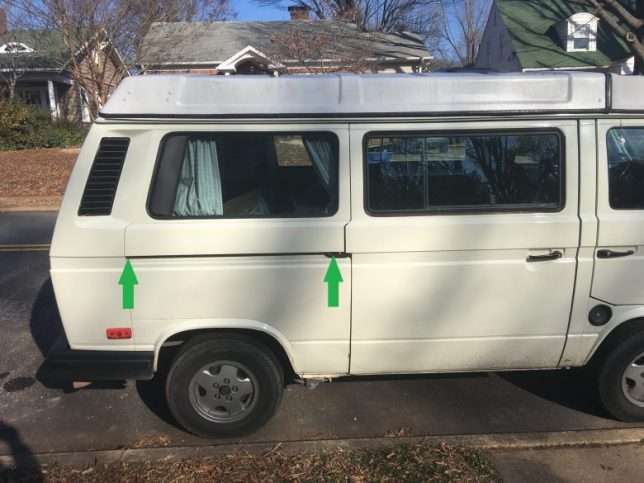 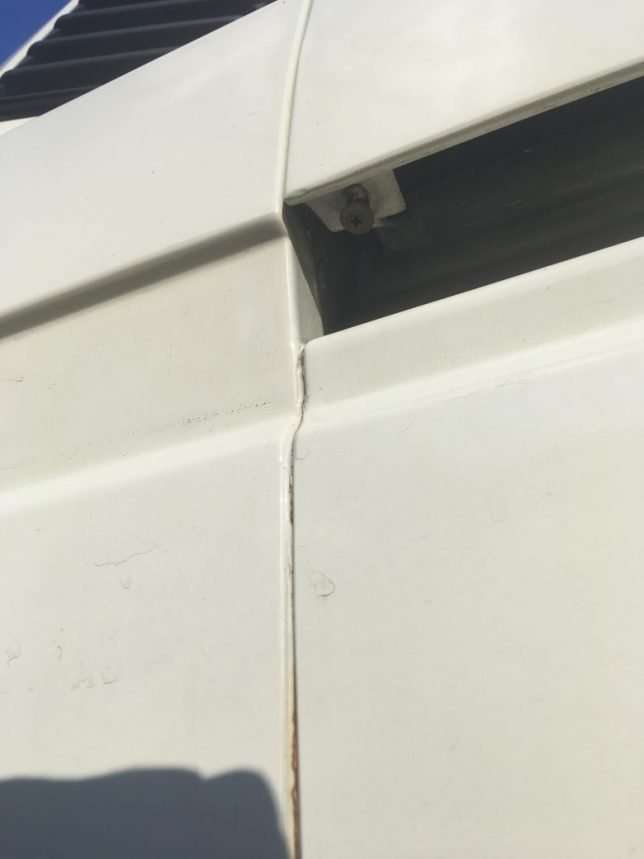 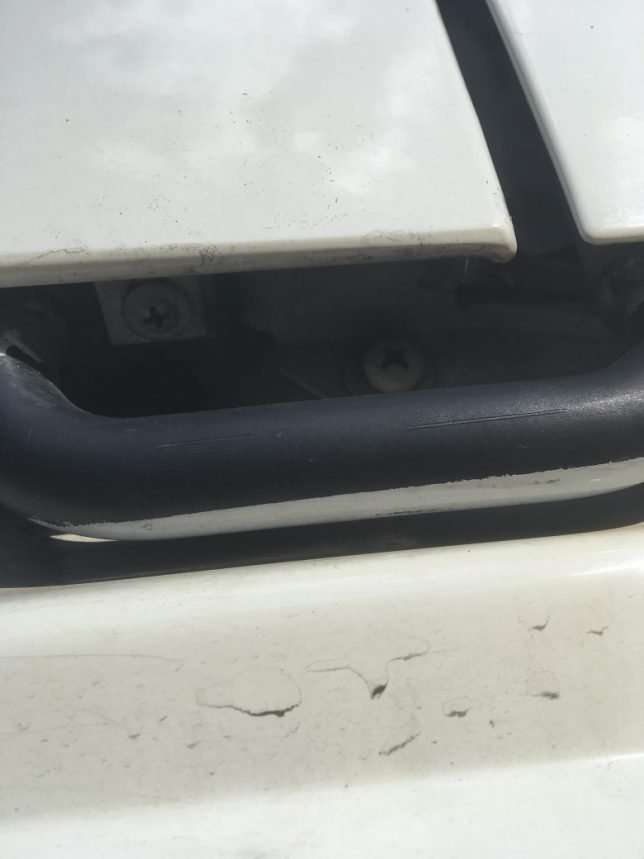 Once they are both out, it takes a lot of upward force and sliding back and forth to pry the panel off.  Some people used spots of grease to help, but mine worked itself out with sheer force alone. 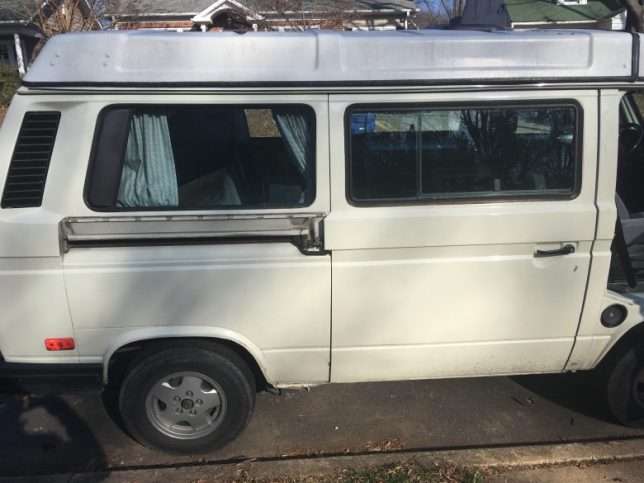 Next step was to remove the sliding door latch by rolling the door back halfway and sliding the roller guide out, then bringing the rest of the door back and pivoting out.  It sounds complicated, but all in all was pretty straightforward. 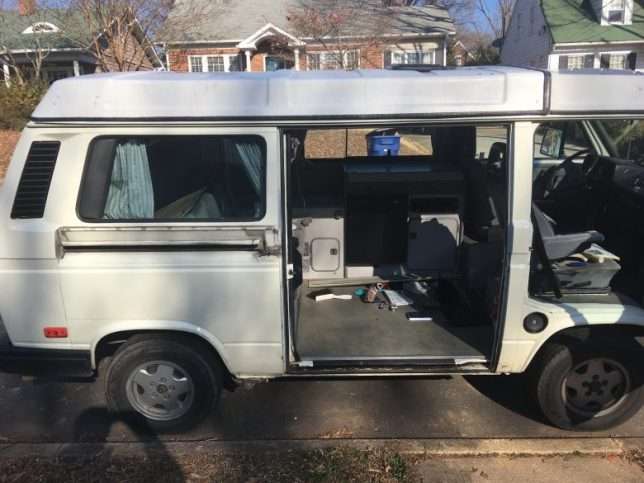 I was sure that this whole door would take an afternoon, but like all projects things are never as simple as they seem.  The reason for this was pure Volkswagen engineering. 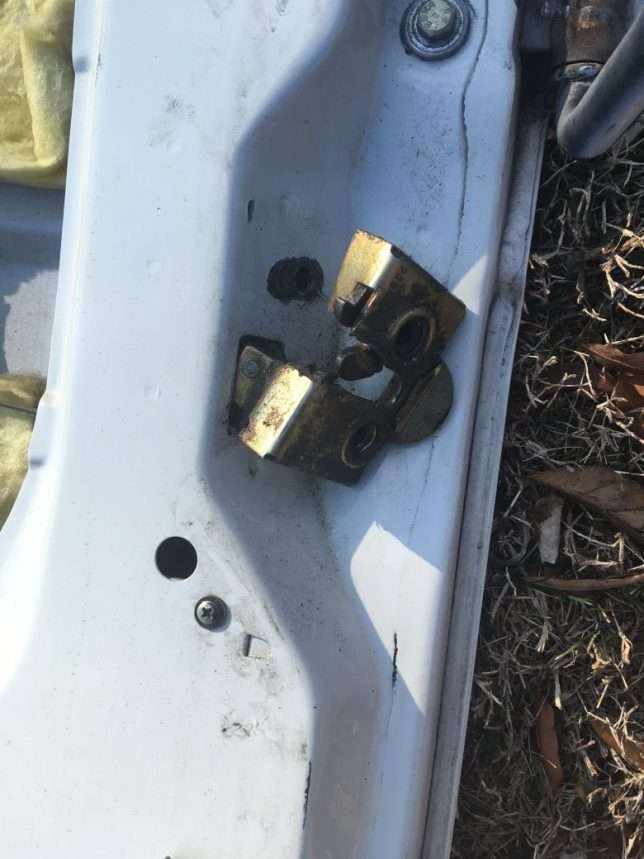 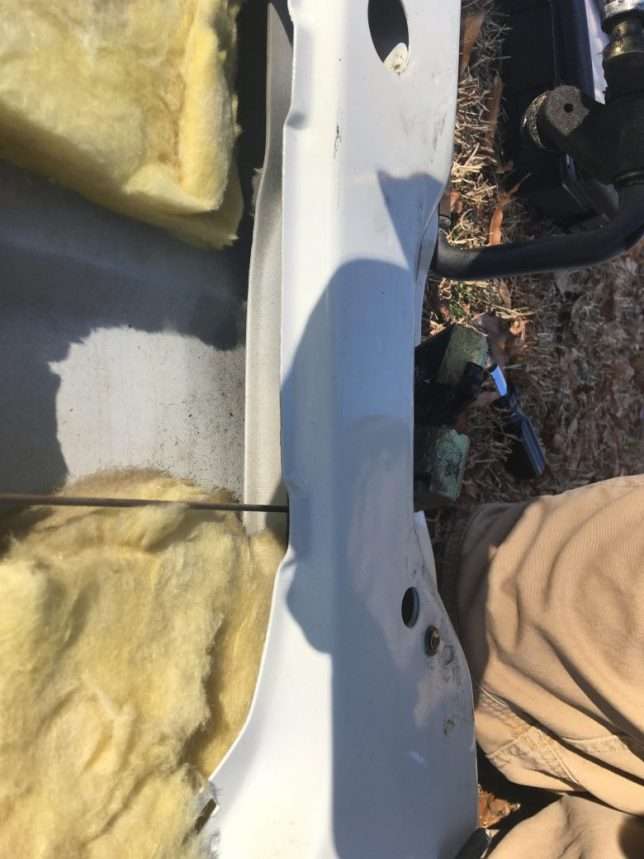 You can see the lock and where I needed to attach the screw.  All I needed to do was place a nut on the other side of the hole and screw the bolt on.  Problem was, reaching behind the screw by hand was impossible.  In the second picture you can see some metal that comes down behind the bolt to cut off any chance of getting a finger behind there to hold a nut tight.

With no obvious answer, I decided to glue a nut to the back and screw the bolt in carefully. 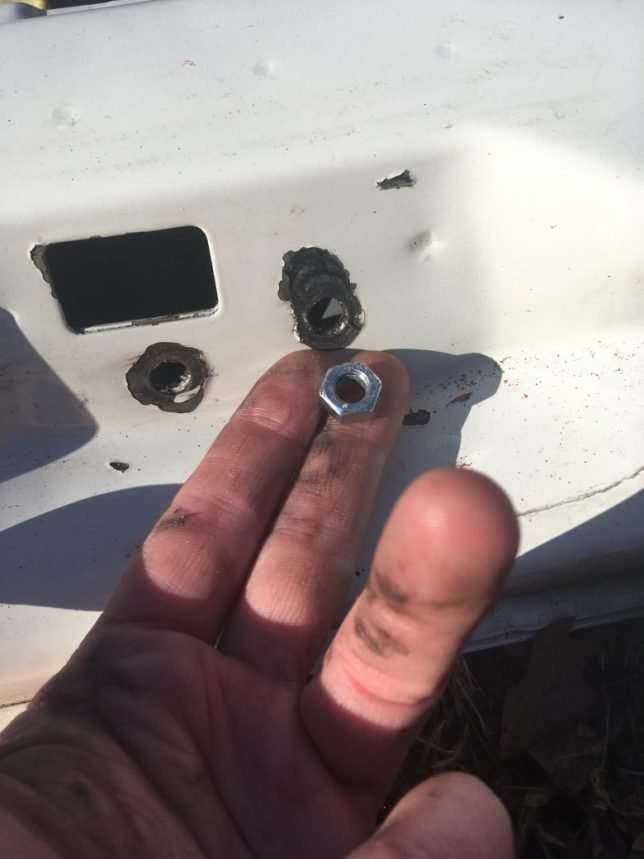 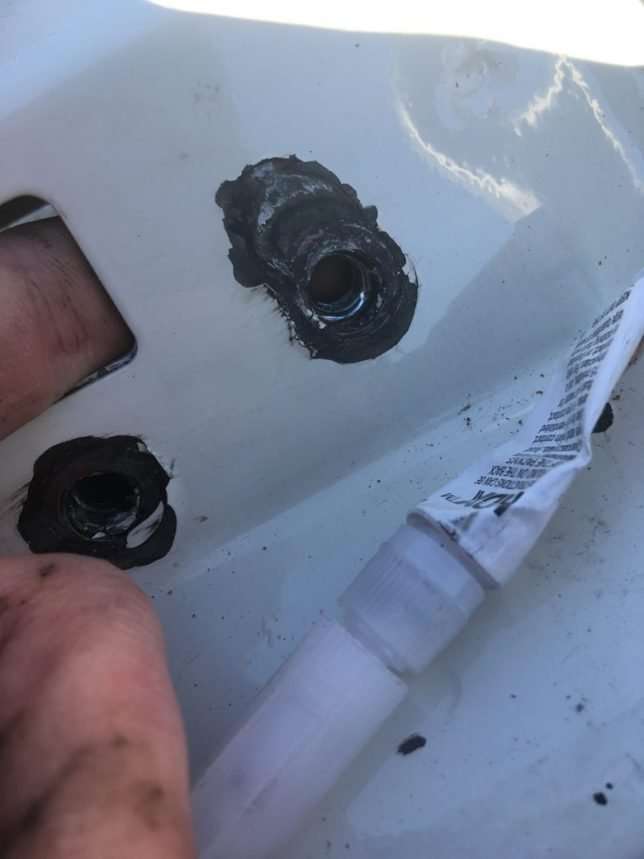 That lasted all of two seconds.

Time to try something else.

I needed a way to apply pressure on the nut from behind in a way that would both grip the but and press it against the metal from behind.  With no way to do this by finger, my father-in-law helped create a device from a coat hanger that might work. 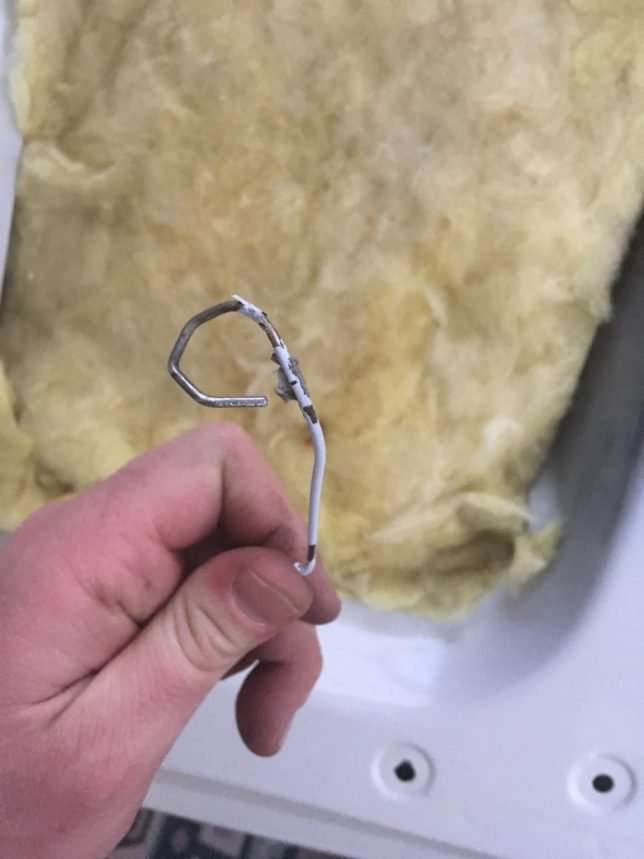 He bent this around the nut and we put a little duct tape on the back to hold the nut in place.  In this way I would be able to press against the metal while screwing the bolt in.  It looked like this: 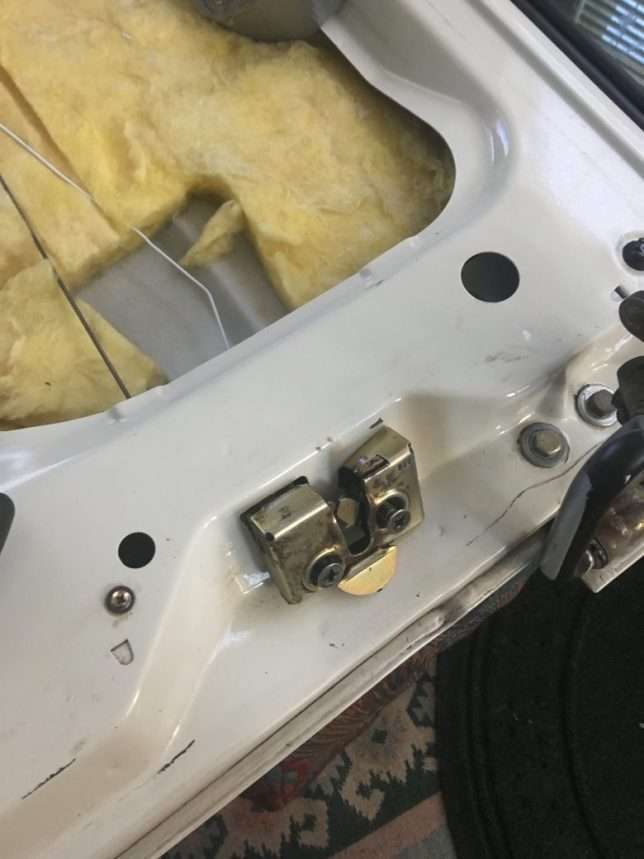 The first attempt failed horribly, just barely putting the nut on the bolt.  But there was no tension on the nut once the coat hanger torqued off, so there was no way to tighten the nut and I had to go back to the drawing board.

We decided to try one more time with the coat hanger, but I put duct tape around the entire nut save for a hole for the bolt.

It worked like a charm and the nut tightened like a charm.  We were even able to pull the coat hanger off, though I would have accepted clipping it off and living with a stray piece of coat hanger in the van door.  No worry, though, as this was no problem.

Last thing to do was to clean the 25+ years of junk, dirt, and grease from the wheels, door, and roller tracts.  It was not pretty and it hurt like all get out as I was doing this in -1 C temperatures.  Every ten minutes I had to go back in the house to wash rags and make sure that I could still feel my fingers.

But the thing got clean and that’s all that matters.  I then slapped a little grease on and refit the door. 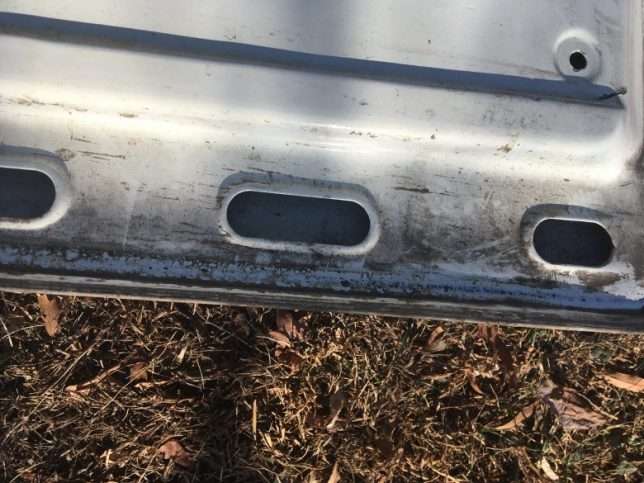 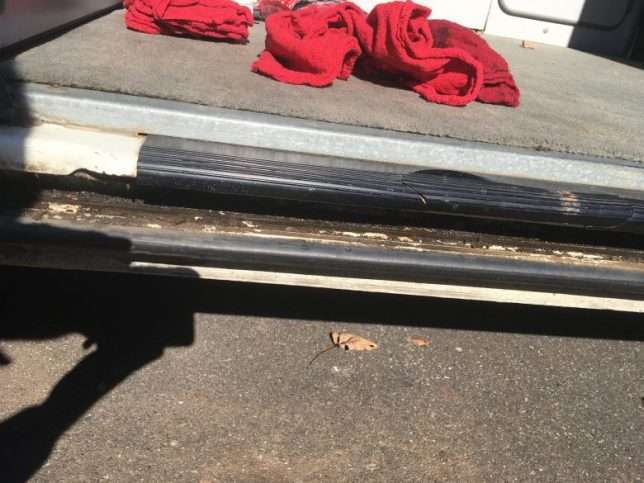 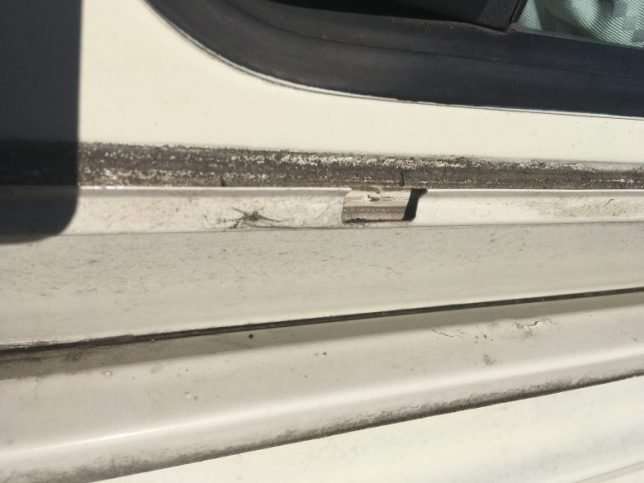 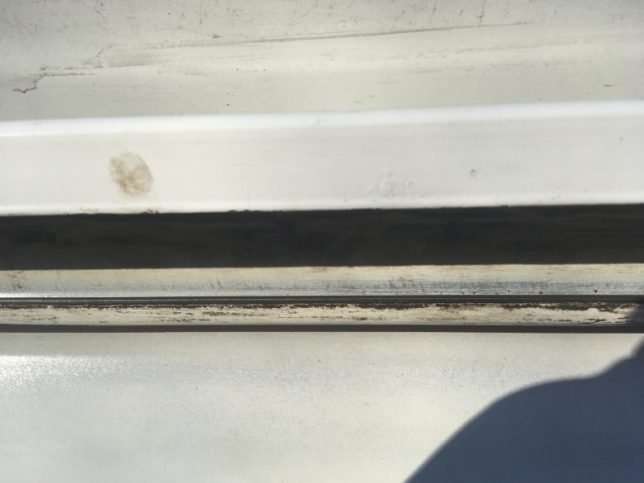 Last thing to do was tighten some of the bolts to bring the door flush with the other panels.  The procedure was straightforward and awarded me gaps less doors that were flush.  Success!! 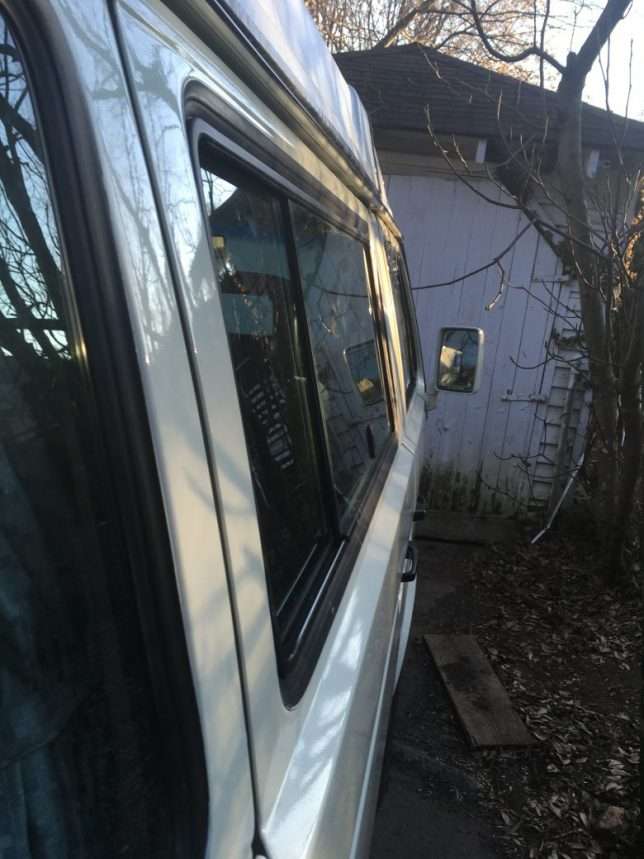