Our second day focused on geysers, so dedicated the third day to the grand nature and wildlife Yellowstone offers in abundance.  Word says that Lamar Valley is the place to go for wildlife and as we saw a bear the day before, my mission for the day was to spy a wolf.  From our campsite we headed East over the road that cuts through the middle of Yellowstone before heading into the Northeastern reaches of the park. 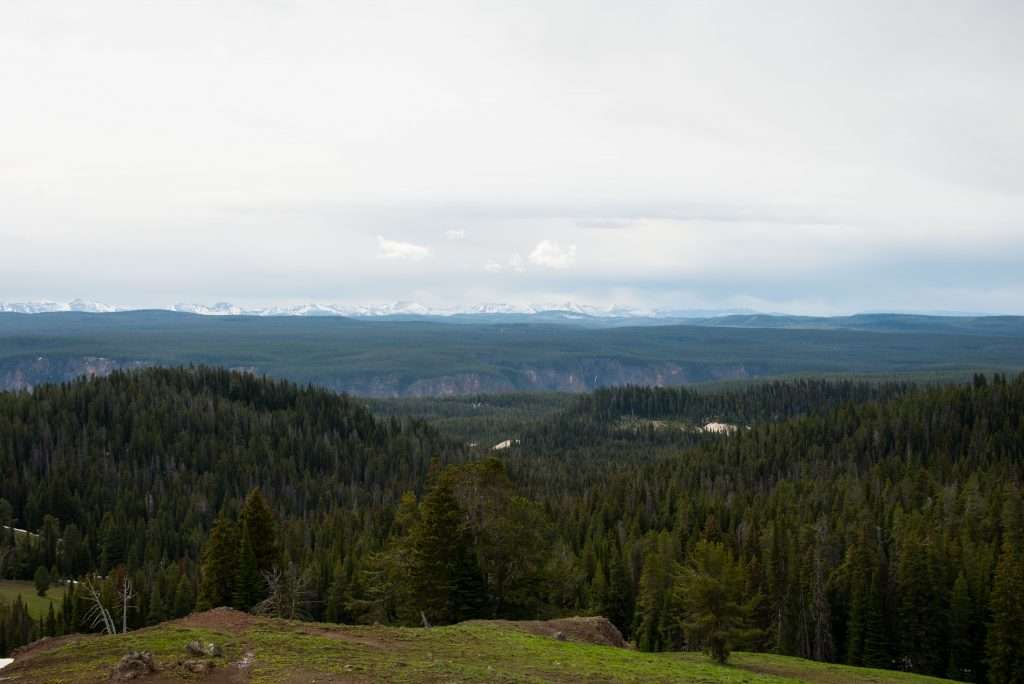 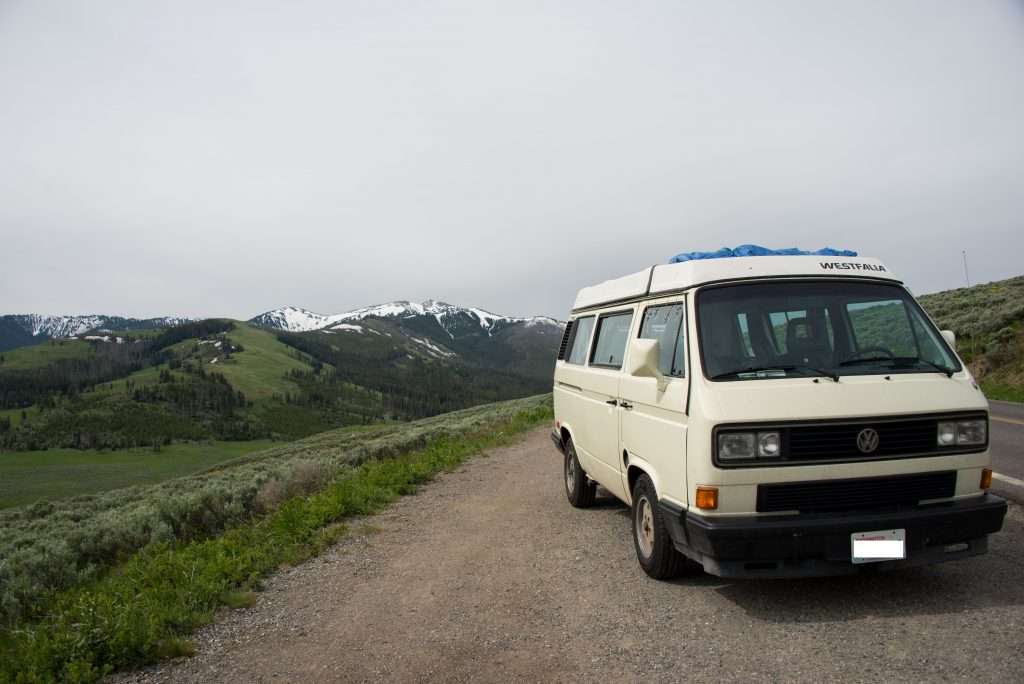 Of course, you can’t go 1 kilometer in Yellowstone without seeing something awesome, so our trip was dotted with stops, our first one being Tower Falls.  It’s a quick walk from the parking lot to the falls, where you are met with a vivid introduction to what happens when flowing water meets two different kinds of rock.  The result is one cool falls with weaving its way through spires or rock.  Very neat stuff. 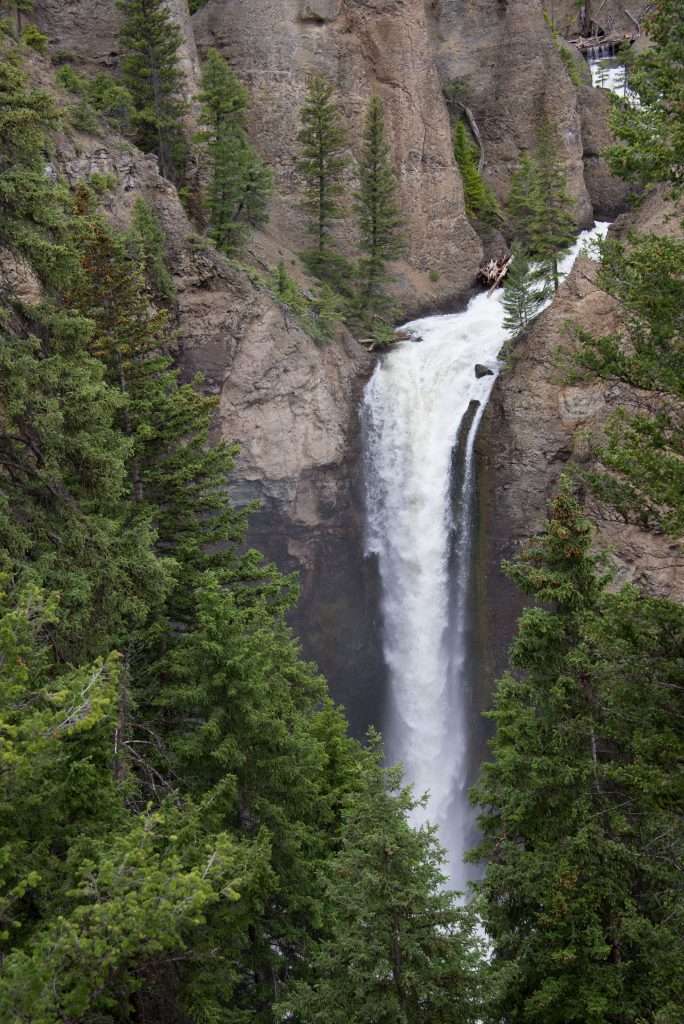 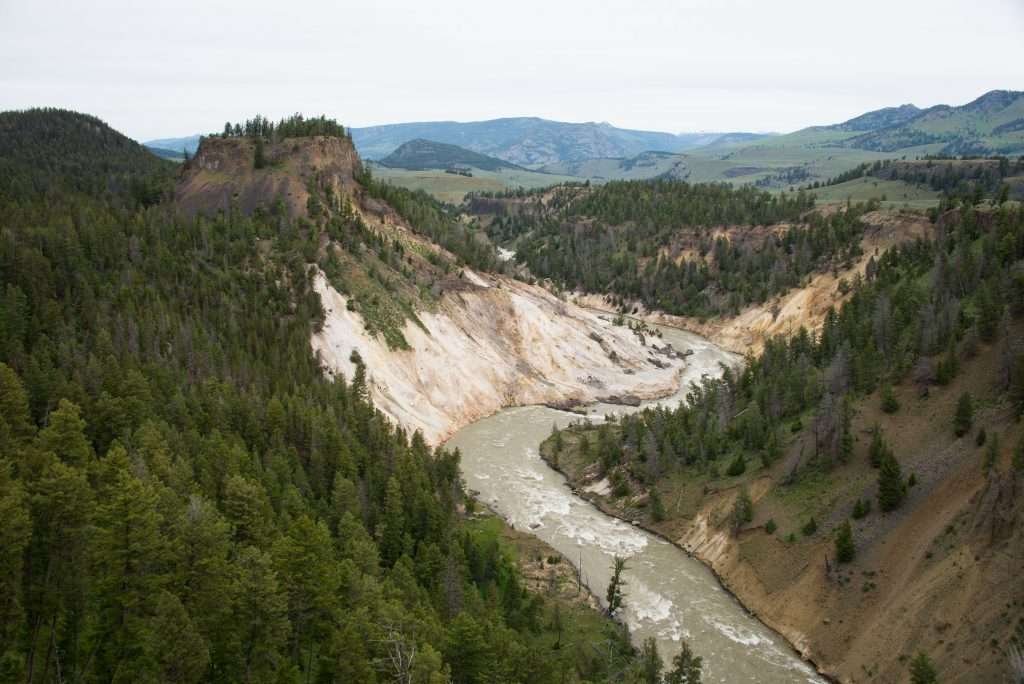 Now, wolves rank as one of the hardest animals in the park to see, so we were in for a challenge.  Thankfully, we had rangers on our side.  To a person, every ranger we met provided excellent advice, answered all of our questions knowingly, and were just downright friendly.  They are helpfulness personified and the ranger at the Tower ranger house proved no exception.

I asked into a good place to see wolves and his response was: “I can tell you where to see some right now.  We have a group of people who found a den with cubs and are watching hit.  Head down this road, then turn left after the second bridge.  Once you see a group of people with binoculars set up, that’s them.”

Wolves AND cubs?  Luck was on our side.  We jumped in the Westy and were away!

But nature works in its own way.  We were not to see those wolves, but on the way we were treated to something really special: a buffalo herd crossing the road.  As we drove, small groups of buffalo popped up on our left and would start jogging.  Then a couple more.  And a couple more.

In the end, we spent 10 minutes watching small groups cross the road and form a herd of at least 150 bison. 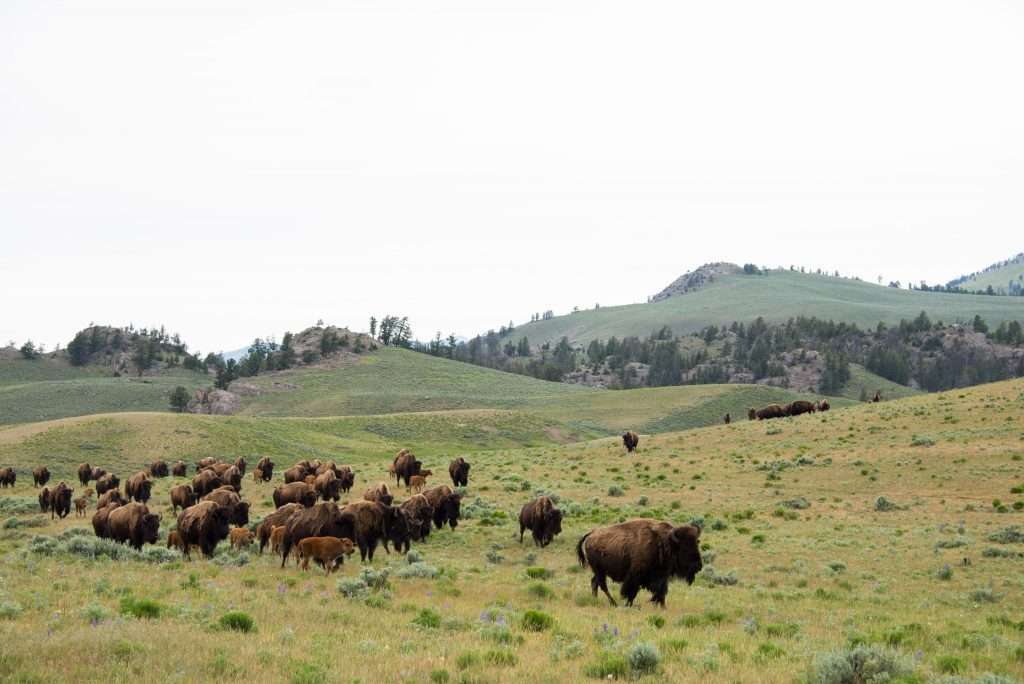 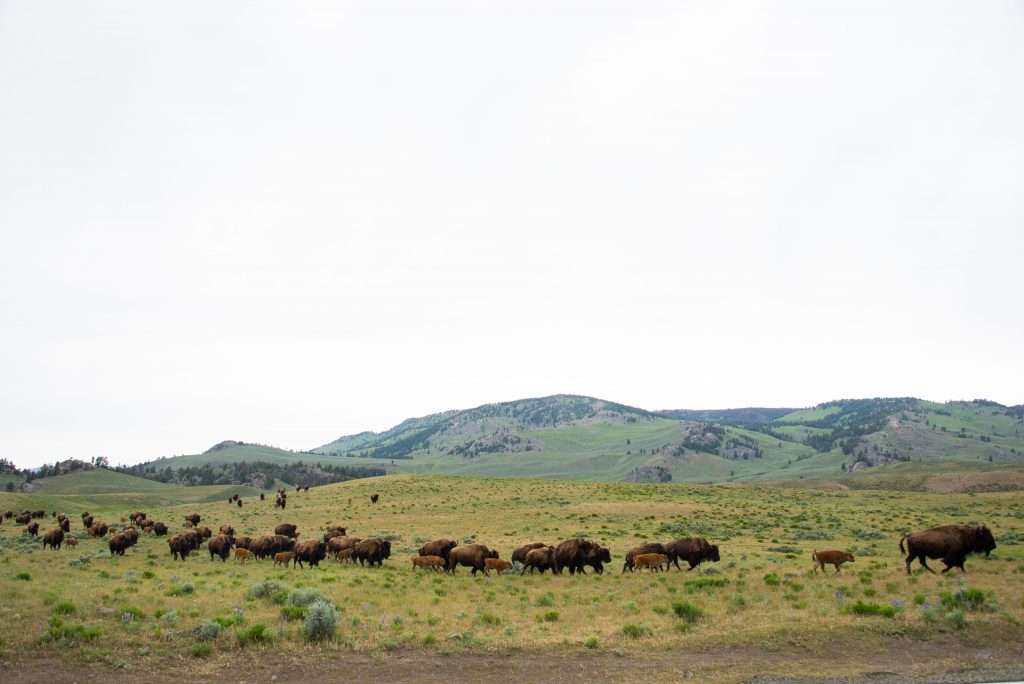 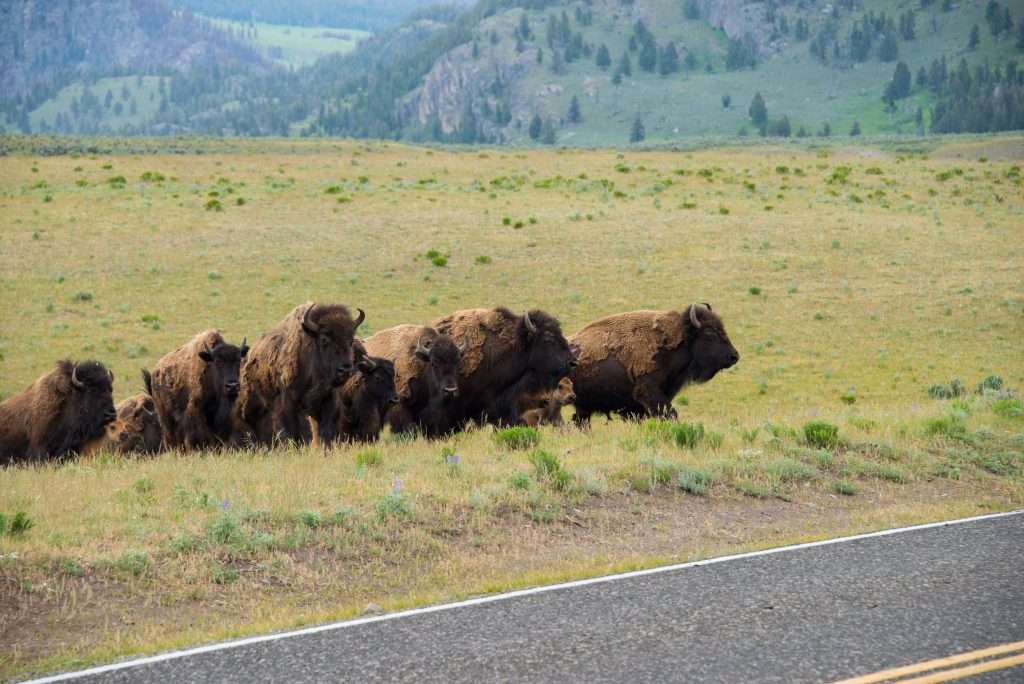 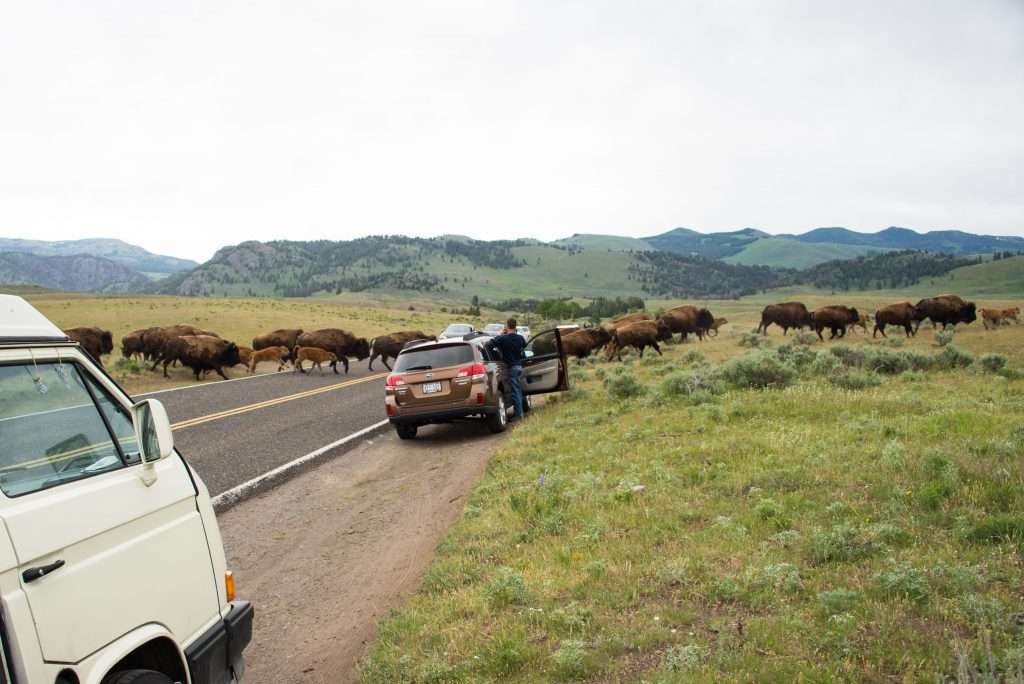 We caught the beginning and stayed to the end, line any sane person would.  Once the final group crossed, we felt lucky enough to see some wolves.

As noted above, our luck on this road was spent on the bison.  We reached a small group of people with scopes scanning a hill and joined in while eating lunch.  After about 30 minutes we decided that wolves were not in our day and started packing to leave.  A car pulled up next to us during this and we got to talking.  They had seen a pack of wolves sleeping about 1.5 hours earlier, so we received directions and headed out.

Now, we didn’t expect to see wolves sleeping, but a couple of kilometers down the road we spotted some cars pulled over and people looking across the valley with good-sized binoculars.  So we stopped and lo and behold, they were looking at wolves!

Seven wolves were walking about a mile away on the opposite side of the valley.  My binoculars worked okay at that distance, but the people we parked next to turned out to be wolf enthusiasts and not only told us all about the packs in Yellowstone, but let us borrow their binoculars for some very crisp views.  Shiz’s lens couldn’t’ really handle the distance, but you can see wolf-shapes. 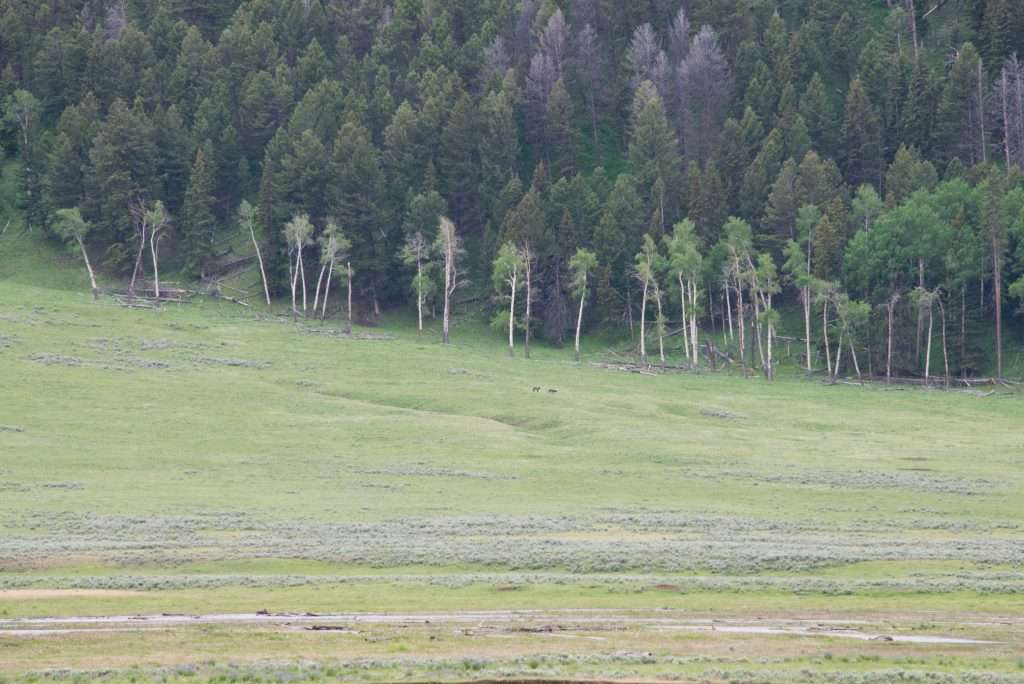 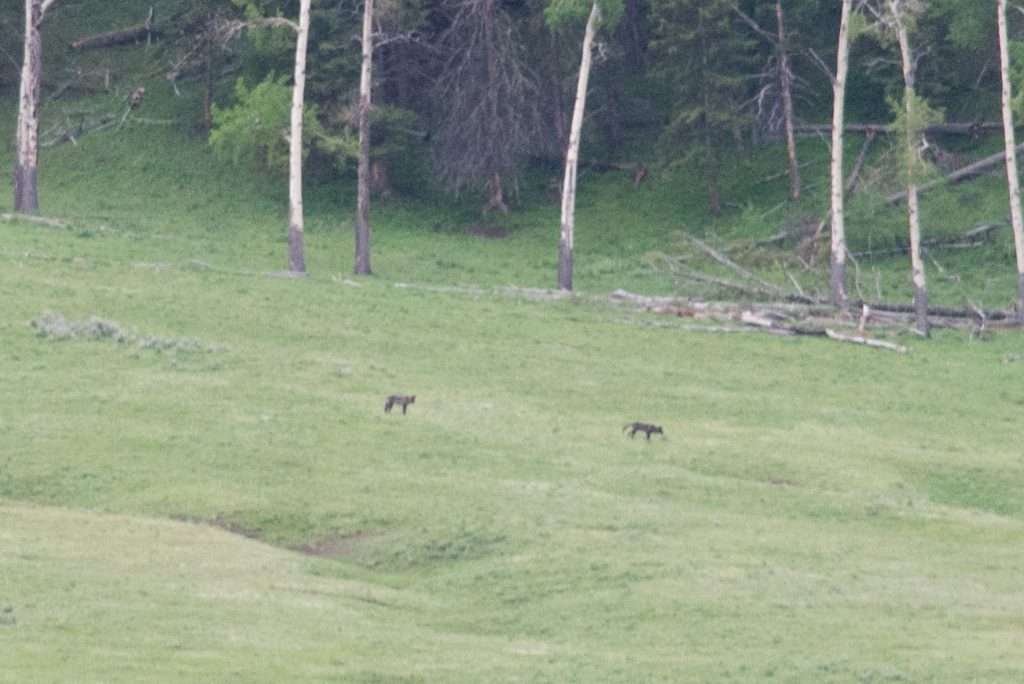 Giddily we spent a a half-hour or so watching the wolves before it was time to head back to camp and make dinner.  We could either return the way we came or via the Northern Loop and as we always like new road decided to drive the Northern route.

This turned out to be a very good choice, as our animal luck stuck with us in the most glorious fashion.  During our drive was saw several spots where people were scanning the hills for bears, but we saw some the day before and the bears seemed to be so hard to view that stopping didn’t make much sense.

As we rounded one corner, however, we saw this: 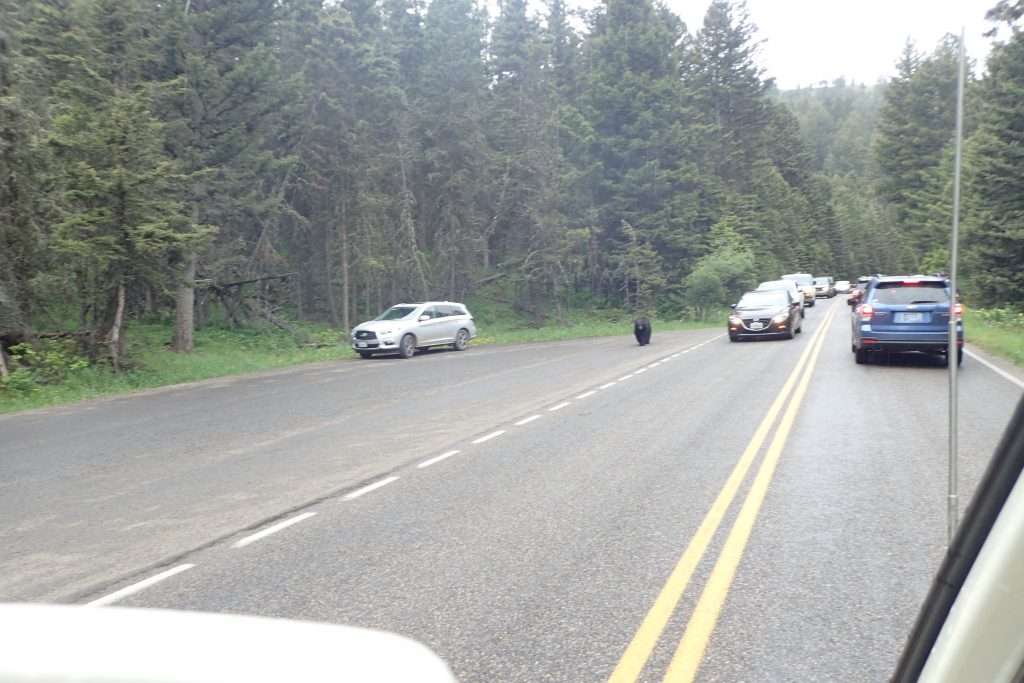 Of course we did the natural thing and stopped in the middle of the road, along with everyone else.  Shiz opened the window on the left-side of the vehicle, but I had to stop her because the bear passed right in front of our car and walked within touching distance of our passenger-side window.  There was no zoom used with these photos. 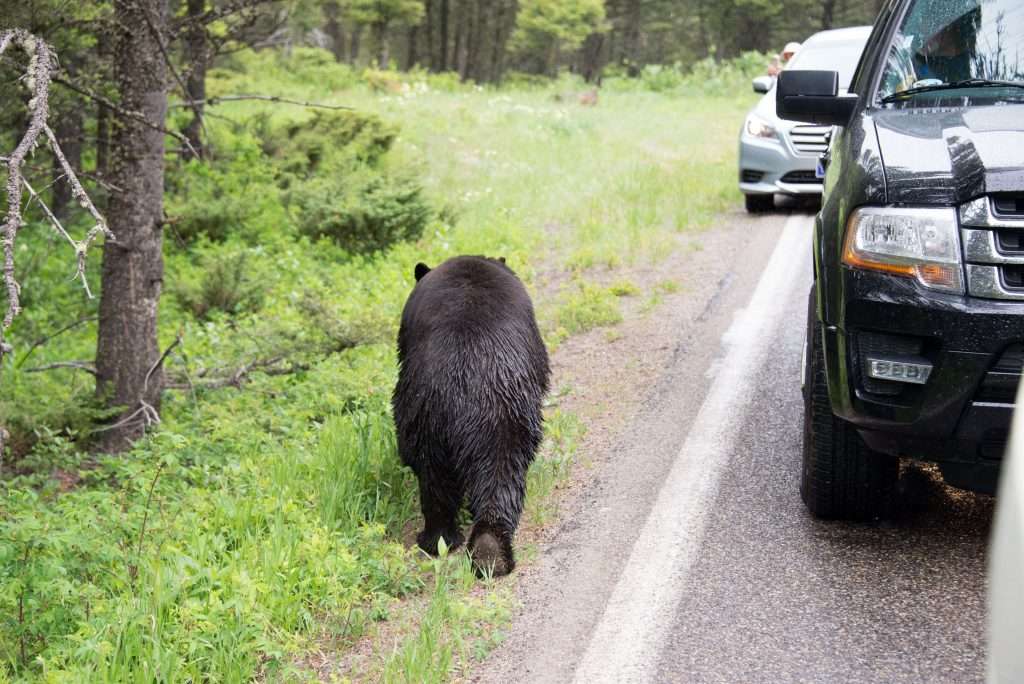 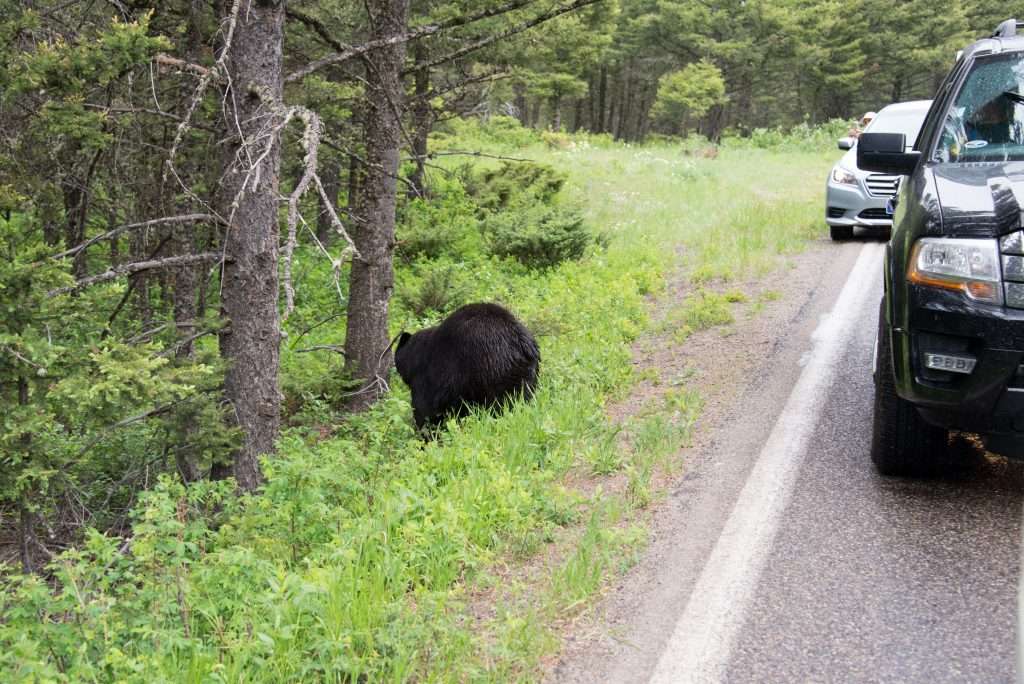 Shiz could have reached out and smacked it on the ass.  I kind of wish she had, but mostly glad she didn’t.  I’m not sure if I could have resisted the temptation to touch it and gain an awesome story into how I lost a hand.

For the rest of the ride back, we were giggling like teenagers.  Before coming to Yellowstone we knew that we’d see wildlife, but never would have imagined that a bear would pass by within touching distance.  Pretty much our whole ride home we talked about the bear, plus a little of the wildlife that we had seen.

We weren’t done with wildlife, however, as some bison greeted us at our campsite.  (By the bye, bison and buffalo are pretty much interchangeable terms.) 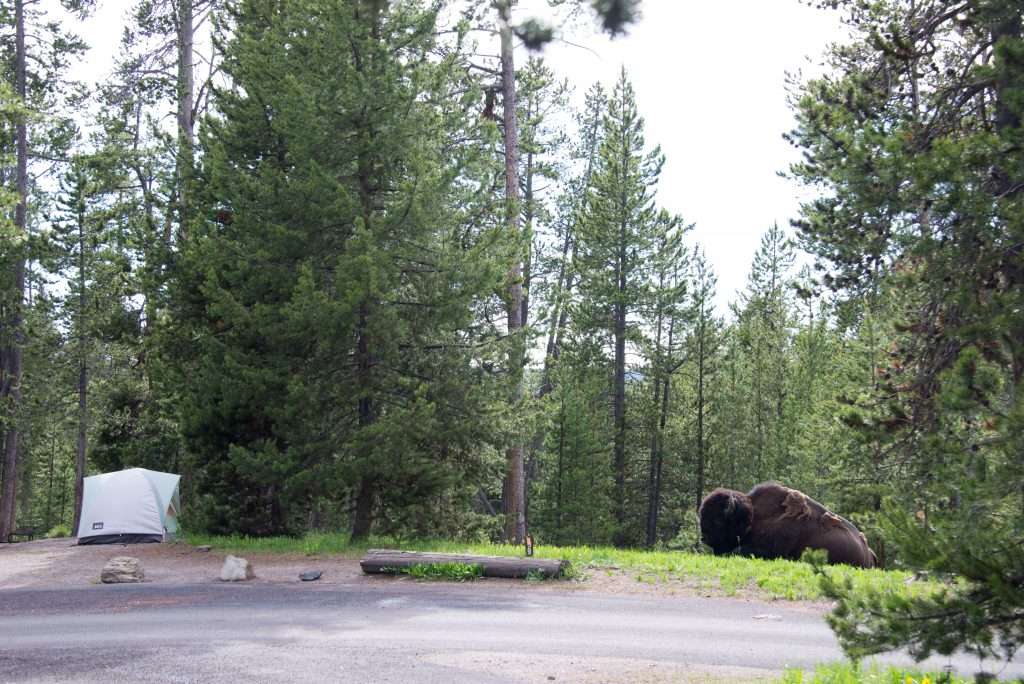 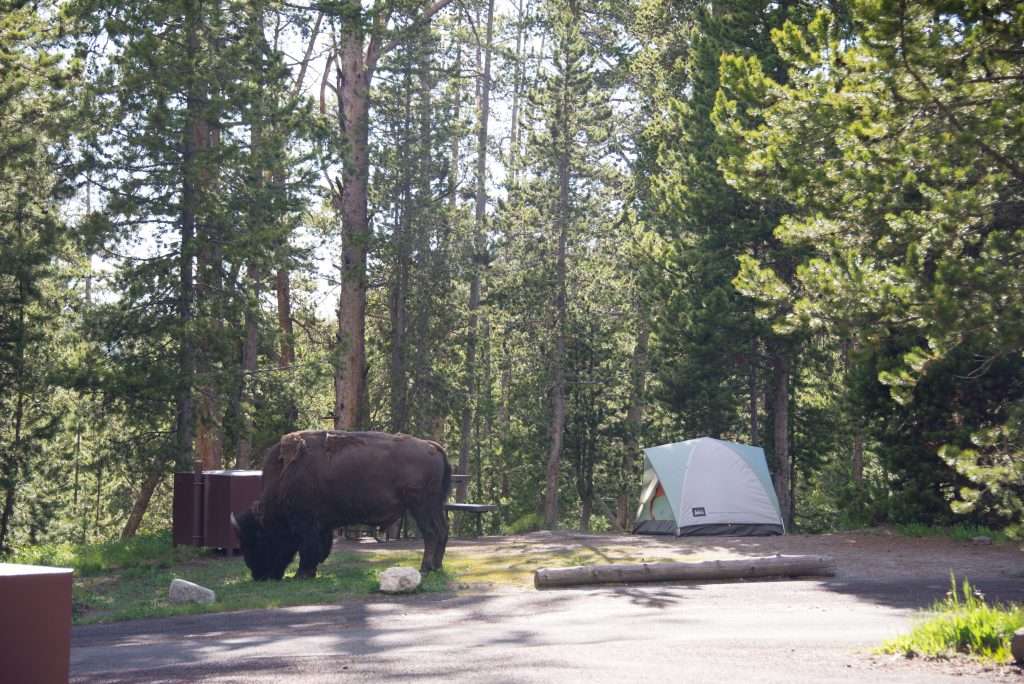